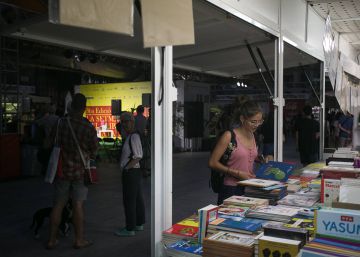 The editorial group Penguin Random House He has signed on Tuesday the acquisition of the stamp specialized in works in Catalan La Campana Llibres. With this movement, the editorial group strengthens its position within the Catalan-language publishing market. Specialized in novel, essay, humor, chronicles, reports and memories, La Campana also publishes an important number of translated authors. The decision to acquire the seal comes a year after the editorial conglomerate, which competes in Spain for leadership with Planeta, announce your intention to double its production in Catalan.

La Campana has given voice to some of the great figures of Catalan literature of the last century. Founded in Barcelona in 1985 by Josep Maria Espinàs and Isabel Martí i Cañellas, stands out among her production the anthology 100 pages chosen by me, which includes works by authors such as Miquel Martí i Pol, Baltasar Porcel, Maria Aurèlia Capmany, Manuel de Pedrolo, Montserrat Roig or J.V. Foix.

His recent successes have been: Creature and company of Carles Capdevila, Dare-you to think by Josep Maria Terricabras, The bafflement of education by Salvador Cardús, The nom of the porc, of Albert Om or History of totes les seves cançons from Lluís Llach. As well El teu nom is Olga by Josep María Espinàs; Pell Freda, Albert Sánchez Piñol; Y Tor, of Carles Porta have been works that in recent times have obtained a good reception from the readers.

During the last decade four of the ten best-selling titles in the market in Catalan have been edited by La Campana: Wonder, from R.J. Palace; The train noia, from Paula Hawkins; L’avi, 100 years old, who’s going to escape for the weekend from Jonas Jonasson; Y Victus, Piñol himself says Penguim Random House in the document announcing the purchase.

"We will look for La Campana to reach the largest number of readers in the largest number of formats and together with Rosa dels Vents [another Catalan label owned by the group] increase our presence in this market," he said. Núria Cabutí, CEO of Penguin Random House. The acquired publisher has 400 titles in its catalog.

The editorial group says in the aforementioned report that the founder Isabel Martí "will continue collaborating directly as an advisor to the label "with Núria Tey, the director of the Catalan division of the conglomerate. After the sale, Martí said:We have taken a step forward. If the world changes, we must too. Luck has always accompanied us, now too. "