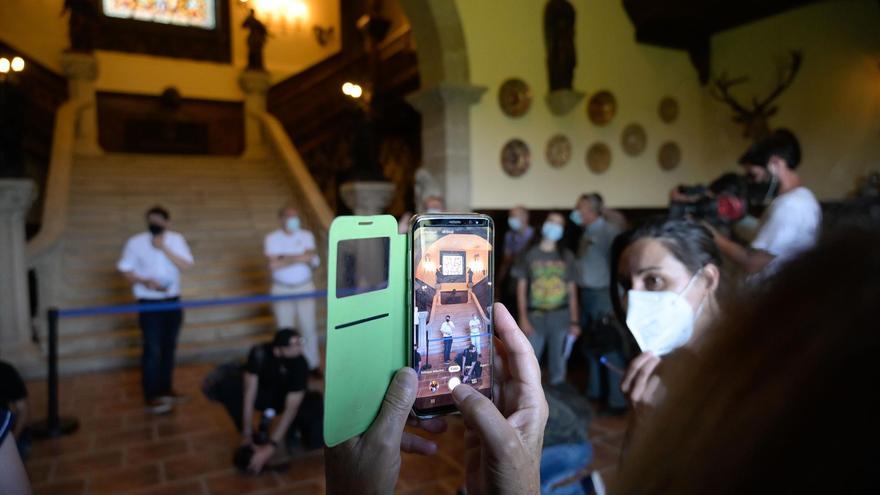 More than 80 years have had to pass for civil society to once again walk through the more than one thousand square meters that the Pazo de Meirás, in the Coruña town hall of Sada. This Sunday, guided by the experts in Sadense construction Carlos Babío and the historian Manuel Pérez Lorenzo, three couples – and as many journalists – have accessed the pazo for the first time since it became public heritage.

At the moment, given the capacity restrictions caused by the covid-19 pandemic, the guided tours, two each day – at 10 a.m. and 12 a.m. – are for a maximum of 20 people. “Today two groups have failed, but the places are all reserved for the next few days“, has commented the Councilor for Culture of Sada, Paola Mondaca.

Carlos Babío has also pointed out that they hope that “later, access will be free, in addition to the specific guided tours that can be scheduled.” This “future” way of proceeding also depends on the judicial decision on the real estate of the Pazo de Meirás that, in the absence of resolution and, therefore, of “legal owner”, cannot be contemplated during the visit.

However, the gardens and exteriors of the site – different from the originals due to the expropriations carried out by the Government of Frank– they contain enough history to hold visitors’ attention for almost two hours. As Lorenzo pointed out at the beginning of the visit, “Beyond the role of Pardo Bazán and the Franco, in Meirás you can see historical details from the 19th century, when it was founded”.

The pazo de Meirás born as a medieval fortress by the hand of the knight Roi de Mondego – buried in the chapel of the Pazo The place will pass from generation to generation and from vicissitude to vicissitude -like the fire caused by the French during the War of Independence, in the 19th century-. It will be the grandfather of the naturalist writer, Miguel Pardo Bazán, who will rebuild the building although, given his liberal inclinations, he undertakes the works “eliminating all signs of nobility” and calling it “Meirás farm”.

The Towers of Emilia

In this building, more modest and independent from the chapel and the renowned Torres de Meirás- it will be where, years later, his granddaughter, the writer Emilia Pardo Bazán, created works such as ‘La Tribuna’, ‘Mother Nature’ or ‘Los Pazos de Ulloa’.

“However, Pardo Bazán wanted a more comfortable residence with a more stately appearance, and that is why, between 1894 and 1910, he ordered the construction of the Torres building, with a medieval aesthetic”, explains Lorenzo. We owe the most recognizable part of the Pazo, as the historian has remarked, to two women, to Emilia herself and her mother, “responsible for the design, including plans, and for the decoration.”

For Bazán, as important as his noble ancestry, “which was in charge of highlighting throughout the building, using shields and emblems“It was her facet as a writer, and as a woman; a feminist thought exemplified, among others, in the stained glass windows,” where she ordered the titles of her works to be included “, or on the chairs in her study, embroidered by her mother with the faces of thinkers of the antiquity. “The one of Emilia, with Catherine of Alexandria”, has commented Lorenzo.

“The place has a lot of history, a very rich history, much more than what is usually known“commented Ana, one of the visitors, who has been” surprised “by everything that the pazo” hides “. For Ana, from Valladolid, it was her first visit, the same as for her husband Jose, despite being from town hall. “We have loved the visit, I hope they get the most out of it for Sada’s benefit,” commented the couple.

Summer capital of the dictatorship

Ana and Jose have been somewhat more critical of the Franco’s passage through the pazo. “I think that more partisan aspects should be put aside and told everything more objectively“, points out Ana, to which Jose has pointed out that he should focus” as other historical events are approached. “” The Catholic Monarchs are the Catholic Monarchs, with what they have done or have not done, and Franco exactly the same “, the man has indicated.

“The story is what it is,” says Ana. And since history has been as it has been, the passage of the Franco family through the Pazo de Meirás is undeniable. In 1938, several influential people from A Coruña created the ‘Junta Pro Pazo del Caudillo’ to buy the land and give it to Franco as a gift. “The operation was financed with forced donations. A Franco general advised stopping the operation – through which the remodeling was also paid for – because, if the figures were known, the Caudillo would be in a very bad place, “explains Lorenzo at the entrance of the building.

The hall of the Torres building is one of the few interior spaces allowed for visitors, along with the entrance to the Chapel. “Although at the moment it is little, it comes to illustrate the passage of the Franco family”, comments another of the visitors. And is that the dictator turned Meirás into not only his family summer residence, but also, during the summer, in “the administrative capital of the dictatorship.”

‘La Granja de Meirás’ was once again in use with the Franco, for example, because it was where the administration officials settled and where the dictator had his own agricultural exploitation, “for which he charged the State and from which he fed.”

In addition, in Meirás, Franco held Councils of Ministers and hearings of foreign leaders in the dining room and in the Torres de Meirás library, where he decided, for example, on what is known as the ‘Burgos Process’ – a summary trial by which in 1970 16 members of ETA- were sentenced.

This data has been one of the most surprising to visitors, as well as the “samples” of the “plunderers of the Galician cultural heritage”. There have been several exclamations and sighs that have escaped -as well as many of the photographs taken- when seeing one of the baptismal fonts in the church of Moraime, in Muxía, used as a flower pot; the remains of the pazo de Bendaña, in the Vigo town hall of Dodro, “scattered along the closure of the pazo” –including two gargoyles used to raise a bench–; or the sculptures of the prophets made by Mestre Mateo that belonged to the Pórtico de la Gloria of the Cathedral of Santiago de Compostela.

After the death of the dictator, Neighborhood groups began to demand the return of the pazo to the public patrimony. The process experienced one of its key moments in 2017 with the declaration of the enclave as an Asset of Cultural Interest (BIC), promoted by the ‘Pro-Devolution Provincial Xunta’ –created as a metaphor for the association that had given it to the Caudillo- -.

This new situation forced the Francs to open it four times a month. One of the couples who visited Meirás this Sunday, from Ávila, had been on one of those walks organized by the Francisco Franco Foundation. “Both stories are very different,” said the couple, who congratulated Babío and Lorenzo “for the enormous work done”.

A congratulation that Jesús and Pilar, from San Sebastián, have added, who have been “very happy that history returns to who it belongs to” and who have also warned that they will return when the interior can be visited.

“This is a very special moment, after all the judicial process -which in 2020 decided the passage of the pazo to the public patrimony-, we are finally here”, Carlos Babío has concluded the visit, in front of the most recognizable façade for those present that, from this Sunday, will become part of the vast history of the Pazo de Meirás.