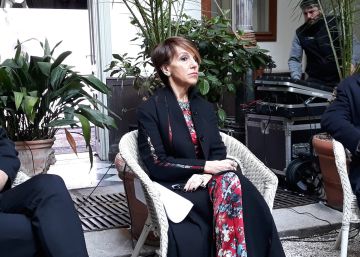 The ship number 9 of the Matadero space in Madrid it will not host the Sandretto Re Rebaudengo Foundation despite the agreement signed in 2017 between the Italian collector and the municipal team of the former mayor of the capital, Manuela Carmena. The Italian collector Patrizia Sandretto is waiting for the offer of a new proposal, which the session must do before June. Convinced that an adequate offer will arrive, its foundation has launched its program of temporary and pedagogical exhibitions in a leased space, the Fernando de Castro Foundation, where until March 21 you can see the work of the American artist Ian Cheng, curated by Hans Ulrich Obrist.

The agreement signed with Manuela Carmena It was the exhibition in Matadero of a hundred works of contemporary art chosen from the long thousand works that make up his collection with names as well known as Maurizio Cattelan, Damien Hirst, Cindy Sherman, Carsten Höller, Doug Aitken, Charles Ray or Anish Kapoor. In the 6,300 square meters of the ship an auditorium, a restaurant, workshops, exhibition halls and an artist's residence would also be built to develop a program linked to the neighborhood and very similar to the one that the collector has offered for 25 years in Turin .

Before the presentation of the exhibition, Patrizia Sandretto Re Rebaudengo (Turin, 1959) explains to EL PAÍS that the act involves the implementation of the Foundation's activities in the absence of headquarters. He adds that Matadero is absolutely ruled out because the agreement was signed without being aware of the difficulties of rehabilitation. Not all the columns of the ship can be moved or demolished, so that the exhibition of the works is very complicated.

At first, there was talk of a rehabilitation budget of 7 million euros paid by the collector, but as the study progressed they saw that money would double and that the results would not be optimal. "We have talked with Andrea Levy [actual concejala de Cultura, del PP] And his attitude is very good. I know that they are looking for adequate spaces so that the commitment can be maintained, but I cannot give any name because I don't know it. "

Sandretto is not afraid that his case is a reissue of what happened with Ella Fontanals-Cisneros, who a few days ago broke his relationship with the Ministry of Culture to exhibit his collection in Tabacalera. "My case is very different. I feel very connected to Madrid and I want to create something important here. Not for a moment do I think of a city other than this one."

The Foundation model on which Patrizia Sandretto works is her space in Turin, where education is as important as the exhibition of the works. Young curators and visitors with some type of disability are especially spoiled by the Italian collector, who believes that art has enormous healing power.

Buyer of work throughout the year, confesses that in each edition of Arc Acquire new parts. For the fair she is very interested in young Spanish and Latin American artists with whose works she wants to enlarge her collection and advances a couple of names in which she is very interested: the Cuban Glenda León and the Catalan Oriol Vilanova.

For his first exhibition at this stage he has chosen Ian Cheng (Los Angeles, 1984) because he is one of the most interesting artists represented in his collection. It is a trilogy titled Emissaries in which, through three large screens, potentially infinite simulations generated by computers using different models of artificial intelligence are projected. The artist considers that it is a kind of neurological gym in which art becomes a means to exercise the confusion, anxiety and comedy dissonance of the moments of change.