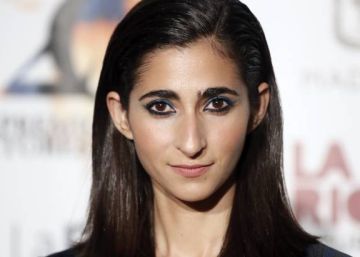 It is very beautiful to hear Alba Flores speak with that strength and that passion for his trade, because there are still people who allow themselves to use the qualifying "television actress" as a frivolity. Alba Flores is a piece of actress in any medium, but it is true that she has hit the double bell in half the world with two series, two works as good as addictive: Saray de Vis a vis and Nairobi from The paper house. But what many do not know is that Flores has been studying interpretation since he was 13 at Estudio Corazza, and is representing a brecht as unusual as The exception and the rulewith his group La Extraña Compañía (six years together), and directed by one of his teachers, Catalina Lladó. We talked for a long time, that is, as always, we will have to shorten and leave a lot of talk outside.

Alba Flores made fairy in a Summer night Dream directed by Tamzin Townsend, he spent several months in a musical (Anonymous lovers) on the Gran Vía, he later presented himself to a casting of Carme Portaceli and signed it for The tattooed rose Y The Trojans Then came The Strange Company, "it's called that," he tells me, "because it was the first thing many said when we told him. It is not very common to do something of Brecht. We started as a declaration of intent: we have a very strong social vocation. It took us quite a while to start because we wanted to address who Brecht wanted to reach: everyone. ”

The exception and the rule He has been successfully at the Teatro del Barrio in Madrid and he returns from October 31 to November 3, and then from December 4 to 8. On November 29 and 30, in the Corral de Comedias de Alcalá. And on December 20 in León, 21 in Santander and 27 in Zaragoza. “We want to look for our own language inspired by Brecht. That the theater is useful and fun. We also try to access audiences who do not usually go to the theater, and in unusual spaces. On November 23, at the proposal of the Cañada Real Film Festival in Madrid, we will be doing a free performance of The exception and the rule in the furniture factory, and then a workshop with the people of the neighborhood. ” Speaking of Brecht, I say I could be fantastic as the protagonist of The good person of Sezuán, that Clara Segura, directed by Oriol Broggi, embodied with great success last February at the TNC in Barcelona. “I love that function. It is the first material with which we set to work in Catalina's workshop. It seems to me one of the best pieces of Brecht. He also calls us a lot Santa Juana de los Mataderos. More projects? Theater is my cradle, my passion, my day to day. That does not mean that I will leave the cinema or television, but I think a lot about the function. Or the functions. And the truth is that in cinema I have a lot to learn. And in the group we started with a brecht, but we don't want to forget the new dramaturgies. ”