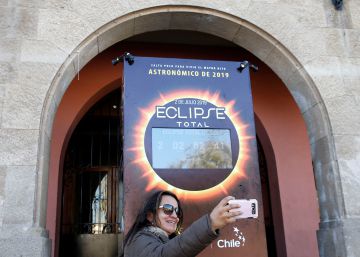 The eclipses Sun totals occur every 18 months somewhere on the planet, often in the middle of the oceans or in inhospitable territories, difficult to access and far from the cities. Chile, however, will have this Tuesday the privilege of hosting this phenomenon in two of its northern tourist regions, Atacama and Coquimbo, where the total solar eclipse will be appreciated as in any other inhabited area of ​​the planet, lasting two minutes and medium.

There is so much expectation that has been generated in Chile, where observation of the universe has become very popular, thanks to its privileged skies, that reservations for accommodation in large cities and small towns have been taken for months. Thousands of Chilean and foreign citizens have come to these areas to appreciate it, there is a kind of fever to get certified lenses and national astronomers are deployed throughout the territory for dissemination. The popular José Maza, for example, hopes to break a record by gathering some 15,000 people in a stadium in the city of La Serena, about 480 kilometers north of Santiago, just before the shadow of the moon is projected onto the Land.

Only about 150,000 tourists have entered the Coquimbo region so far. La Higuera, of about 4,200 inhabitants, will be the place where the day will be darkened for a greater amount of time: two minutes and 35 seconds, reaching its maximum at 16:39 local time. Even this small mining town -revolved now because of the phenomenon- will even reach the Chilean president, Sebastián Piñera, who will participate in a citizen activity, which includes a talk by the astronomer Luis Chavarría, director of the Astronomy Program of the National Commission for Scientific Research and Technological (CONICYT).

Renowned researchers have arrived in the northern regions of Chile Atacama and Coquimbo, such as the Spanish doctor Miquel Serra Ricart, astronomer at the Institute of Astrophysics of the Canary Islands, administrator of the Teide Observatory in the Canary Islands. "This is my total solar eclipse number 15. What is special about this is that the whole band passes through three professional observatories: Cerro Tololo, Gemini Sur and La Silla," he says from Tololo, in the Elqui Valley, where your group will broadcast live on the Web.

On the national expectation of the phenomenon, Serra indicates that of all the eclipses that he has witnessed, tomorrow in Chile is where he has seen the greatest mobilization. "Many acts and information throughout the region near the band of totality, which shows the high interest of Chileans for astronomy," says the Spanish doctor. "I hope this eclipse will increase awareness of the importance of protecting the skies from pollution and continuing to invest in education and scientific research."

Some have preferred less conventional scenarios, such as the University of Arizona astronomer Glenn Schneider, who has been pursuing solar eclipses since 1970: along with about fifty people, he will be on an airplane in search of an eclipse in the middle of the Pacific, where he will have its maximum duration. As explained by Professor Maza, the best place to observe the eclipse will be 3000 or 4000 kilometers offshore from the Chilean territory: "It starts near New Zealand, crosses the entire Pacific and finishes off in Chile, when the sun is close to set When it passes to Argentina, the sun will be too low, "so it will not be able to appreciate as in Chile.

The north of Chile is declared as the best place on Earth for astronomy: currently, 50% of the installed optical capacity to observe the sky is in the South American country and in 10 years, it will reach 70%. Chilean astronomers can use 10% of the observation capacity of all the major European, North American, Japanese or Taiwanese centers that are in the north of the country, such as ALMA and Paranal, which has pushed national science. Unlike what happened 40 years ago, therefore, currently astronomy in Chile has become popular. If four decades ago there were not 20 astronomers in the country, currently about 200 doctors work in universities and observatories in the north of the territory or in centers abroad.

"What has happened is a kind of Big Bang", pointed out a few months ago to EL PAIS Dr. María Teresa Ruiz, the first graduate in astronomy in Chile, who will observe for the first time a total eclipse of the sun from an airplane, in a flight organized by National Geographic. "Chile was established as a true window to the universe, where the most advanced observation instruments of the technological powers of the world have been installed, and great discoveries have been made from this country."

The eclipse of the sun on Tuesday finds Chile in love with astronomy. But it is not a passing fad or a casual phenomenon. The installation in Chilean territory of large international observatories since the end of the fifties and the work of decades of national astronomers has contributed to this unparalleled moment. They have made great discoveries – Ruiz, for example, found the first solitary brown dwarf, a planet that did not reach the star – but at the same time they have led a deep dissemination work.

For this eclipse of the sun, for example, two books have been published, both with tremendous editorial success: Eclipses, by José Maza, and The black sun, by Mario Hamuy, astronomer and National Exact Science Award. "Since the independence of our country (in 1810) there have been 14 total eclipses of sun that have been witnessed in the territory", Hamuy starts in a text of friendly reading, where he explains that thanks to eclipses, for example, discovered helium or Newton's Law of Gravity was replaced by Einstein's Theory of General Relativity in 1919.

When the moon completely covers the solar disk -the maximum moment of the eclipse-, "the real show will begin," Hamuy writes. "The sky will be dark, despite being full day, you will feel that the temperature will drop some degrees, silence will prevail over the local fauna". It is one of the main recommendations of scientists, along with the use of appropriate lenses: observe what happens to animals, bewildered by the sudden darkening of their habitat. To experience the Solar System in person, however, Chile will have an unusual second chance: on December 14, 2020, over the regions of La Araucanía and Los Ríos, in the south of the country, there will be a new total solar eclipse. It will be even better than tomorrow, because it can be observed around noon.

The total solar eclipse on Tuesday will last, in some cities near Buenos Aires, less than 30 seconds. It will happen, moreover, at the edge of dusk, so it will be difficult to see and once the sun is hidden by the shadow projected by the moon it will not shine again until the next day. You have to travel as far as possible to the west of Argentina to see as best as possible the eclipse during its apogee, about two and a half minutes. In the province of San Juan, at the foot of the Andes, there are places that have been prepared for months for this astronomical phenomenon. This is the case of the Valle Encantado, which will receive more than a hundred scientists, and of places such as San José de Jáchal and Bella Vista, located in the center of the so-called "strip of totality" of the eclipse.

Interest in astronomy in Argentina is lower than in Chile but it is booming. The main media have counters in their web pages that mark the hours that are missing for the eclipse and have also sent mobile units to tour the towns where it will be contemplated. In addition, the Internet has been filled with advice on how to observe the sun without damaging the view, where to get special glasses and how to make a homemade.

The Planetarium of Buenos Aires organized throughout the weekend a "marathon of the sun" with the projection in continuous session of a special on eclipses plus a workshop of dark cameras to see it live in a safe way. "For more than a week, we have been receiving a hundred queries through social networks, telephone and email, the demand from the public is very high, the eclipse generates a lot of curiosity," said Mariano Ribas, coordinator of the Outreach Department. Scientist of the Planetarium.