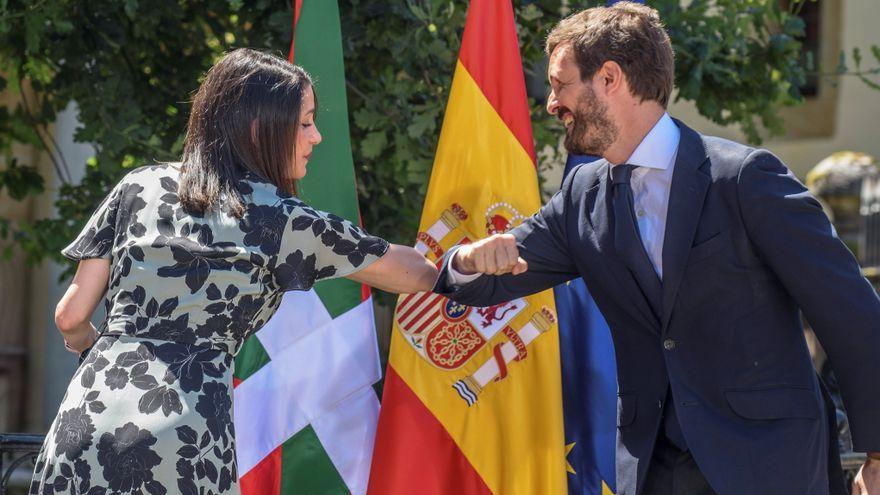 The presence, and active participation, of the regional coordinator of Citizens and vice president of the Board, Juan Marín, in the congress of the Andalusian PP held this weekend has shaken the internal waters of the formation led by Inés Arrimadas, already quite a lot revolts. The image of Marín and the president of the regional Executive, Juan Manuel Moreno, hugging, after the leak of an audio starring Marín that disrupts Moreno’s strategy to approve the 2022 Budgets, has reopened a debate that the Citizens’ leadership tries to plug for months so that it does not explode: the possibility that both parties merge.

The theory of the leader of the party that now calls itself “liberal” is that the political center that it claims to represent is now “more necessary than ever” and that the two formations should collaborate to “drive out Sánchez’s government”, but ” each one from their space “. If the case comes, they defend, they could govern in coalition, as they do now in Andalusia itself or in Castilla y León.

The polls are stubborn and do not predict anything good for the future of Ciudadanos, quite the opposite. Not only in Andalusia but throughout Spain. Precisely that fear of disappearing from the map is causing more and more public officials of Citizens to be considering that solution. “We are not going to fool ourselves, the party is in free fall and sooner or later that debate will have to be opened,” says a regional deputy who prefers to remain anonymous.

The idea is not new. It was even on the verge of curdling after the resignation of Albert Rivera, when Pablo Casado and Arrimadas reached an agreement to go on joint lists in Galicia and the Basque Country, and also in Catalonia, in the style of the “Navarra Suma” coalition that both they closed with UPN. In the end it was only possible to do it in Euskadi. In Galicia the president of the Xunta, Alberto Núñez Feijóo, closed in on the band. Nor could it be in Catalonia, where Casado’s men attracted Lorena Roldán to their ranks after Arrimadas removed her from the number one candidate in favor of Carlos Carrizosa.

In the Basque Country, the experiment has been blown up after one of the two Citizens’ deputies has fled the PP, joining an endless list of public and organic officials who are getting off the ship before it sinks. The last one was announced this Monday in the Malaga Provincial Council, but last week the leadership of La Rioja resigned en bloc.

All this debate, in the opinion of one of the party members consulted, could be halted if Casado and Arrimadas sat down to talk “quietly” to see how they could face the future in the face of the next electoral appointments.

The two leaders tried it last April during a discreet lunch they shared in Madrid and of which Arrimadas has not wanted to tell anything about its content. Yes, Casado did, who revealed that “he had offered him everything.” “Everything is everything,” he remarked, including a “convergence” and making Arrimadas the spokesperson in Congress for that merger, as Casado explained in an interview on Antena 3, in which he added that he had been “very generous” with Ciudadanos .

Arrimadas was quick to deny him: “We have never discussed charges and I am not selling myself for a charge. I do not understand why Mr. Casado is saying this, “he said in RNE, to later qualify these revelations as “verbiage.”

Relations between the two leaders have cooled and now there are few bridges built despite the fact that their respective parties also continue to govern in Castilla y León, although with great difficulties.

Meanwhile, the elongated hand of Fran Hervías has continued to do its thing, stirring the troubled waters of his old party, engulfing several of its leaders. The former Secretary of the Organization is attributed with the attempts to dynamite Citizens in Asturias, and people of his kind with the leak of Marín’s recording, although he has personally denied it. The vice president of the Board himself pointed out his former partner before a congress in which that possible convergence for Andalusia has been fed again, after the leader of the PP, Juan Manuel Moreno, received him with a big hug in Granada and rescued, in statements to the Ideal newspaper from Granada, the idea of ​​a joint PP-Ciudadanos candidacy, and integrate Marín himself into their ranks. “It is science fiction, but everything can be,” he dropped, in a phrase that his collaborators later downgraded.

The spokesman for the Andalusian Executive, Elías Bendodo, took advantage of his conversation with Marín to also launch new siren songs to the Arrimadas party: “We have consolidated a base of change that has to continue.” However, they both later denied the older one. “Each one in his home and God in everyone’s,” Bendodo said. At least for now.

In the party they believe that Marín is not bitter about that sweet, even if he denies it out of doors, “as he denies everything,” adds a comrade in the ranks. In fact, on one occasion he slipped that it would not seem like a bad idea, being immediately overruled by Arrimadas.

The leader of Ciudadanos continues to be determined to close that door, convinced that it can save the party and be “useful” as an “alternative to bipartisanship.” A) Yes He left it said this summer at the Political Convention held in Madrid: “There will be no merger with the PP”, he settled, annoyed because that debate slipped into a conclave that served to proclaim itself “liberal” and that sought to inspire encouragement to its downcast militants.

Despite her complaints about the harsh attacks they are being dispensed by from the PP, the leader of Ciudadanos continues with her hand extended to Casado to work “together” in order to “fight the government Frankenstein de Sánchez and his nationalist and separatist allies “, and so that in the future he does not have to rely on the extreme right. And so he was sent this Monday after attending the award ceremony for” autonomous of the year. ”

In his opinion, that Government Frankenstein it is “too dangerous to think that one can disassemble it alone.” “If in Genoa they are pending to attack Citizens and their friends, and to break the agreements in Euskadi, then it will be very complicated,” he warned. That is why he has insisted on asking the PP “to think more about building, not destroying, and think more about having allies and not enemies, both within his party and outside.” Hence, some believe that this “regrouping” of the center right cannot be completely ruled out and that it is only a matter of time.