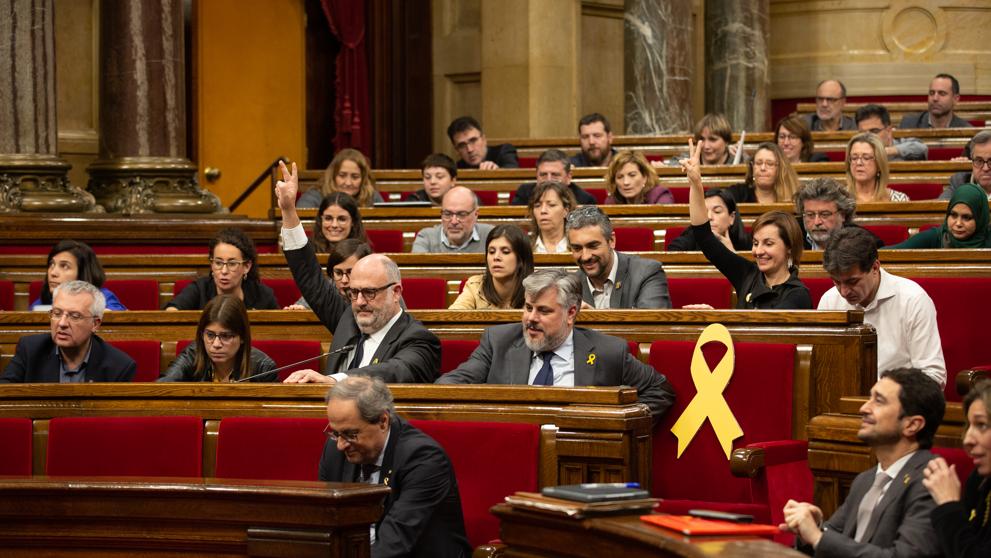 The Parliament of Catalonia approved this Wednesday a proposal for
resolution from Junts per Catalunya, Republican Esquerra and the Cup
what are you asking for break free to the seven members of the defense committees of the republic (CDR) arrested and imprisoned last September, accused of a terrorist offense at the National Court.

The text – which also claims the file of the case that affects the seven prisoners and two other people released with charges – was registered two weeks ago by urgent means and has not had the support of the eight deputies of the group from Catalunya at Comú Podem. Although, the absolute majority that shows independence in the Catalan Chamber has been enough to get ahead. The independence parties they hoped to add the commons in the vote on the motion for a resolution of the Catalan hemicycle. Finally it has not been so.

The commons have voted in favor of most of the text because, according to Susanna SegoviaThis has happened on other occasions, but they have refrained from those who ask to interfere in the investigation because they do not believe that “the Parliament is the space that should request the file of a case, even if there are doubts about the independence of justice” and because they believe in the separation of powers.

The proposal argues that there has been a violation of fundamental rights and procedural guarantees of detainees, who ask to investigate, and claims that, while they remain in prison, the detainees are transferred to Catalan prisons. It also calls for an end to the isolation regime and criticizes the "instrumentalization of the crime of terrorism for political purposes and the consequent criminalization of the right to protest and the legitimate exercise of political dissent"; a point that, like those who refer to the rejection of the provisional prison or the approach to prisons closest to their families, the commons have voted in favor.

It is defended in the text that the investigation is framed within a general cause against independence, and they are in solidarity with the prisoners and their families; the "polarization and opacity of the National Court" and retests the leaks of the summary, points that have also supported the commons.

The deputy of JxCat Aurora Madaula, who has gone out to the lectern with a t-shirt that could read 'I am CDR', has argued that the arrests are part of a “general cause against independence”, has talked about police torture and has claimed the involvement of agencies and judicial institutions in the case. The republican Jose Rodriguez He has criticized the Spanish Justice "banalize the crime of terrorism in an attempt to criminalize a movement that is mostly peaceful and democratic."

For the cupera Maria Sirvent in this case, as in others, the exceptionality of the criminal law of the enemy is being applied and has argued that the police operation is directed by the National Court "with the clear political intent to stop the mobilization and the organized people."

The socialist Ferran Pedret He has asked for prudence before ruling on the serious accusations, respect for the presumption of innocence, has been critical of the groups that rushed on the same day of the arrests to condemn or exculpate those investigated and has warned the independence that you cannot To say that "because the independence movement is peaceful, it is impossible for someone to use violence."

From the Cs bench, Lorena Roldan He has criticized the independence groups for "jolting the violent" that day, he has accused them of being those who violate the fundamental rights of half of the Catalans, in his words.

While in the guest box there were representatives of the relatives of those investigated, the popular Alejandro Fernandez He said that in democracy it is possible for families to show their disagreement with judicial decisions: “Can the legislative power, that is to say the Parliament, be able to disavow justice? No".