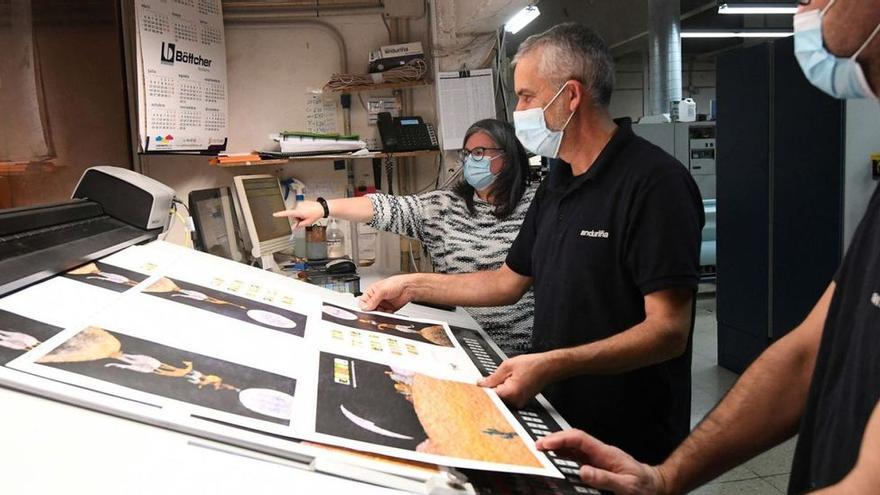 The complex network of paper derivatives is extensive and that used in editorial production has nothing to do with that of toilet paper or cardboard. The part of supply that fails now affects the publishing sector. Also in that of the construction. Interior designers refer to delays in the delivery of wallpaper: “Before they served you in 15 days, now they take a month and a half,” reflects Teresa Parga, co-founder of the Tema Interiores studio. More of the same in print shops. “In September they gave us a delivery deadline for next January. A delivery that used to be 10 or 15 days, ”explains Ramón Romay, warehouse and purchasing manager at Gráficas Anduriña.

An employee of Gráficas Anduriña working on the printing of a project. Gustavo Santos

This is how this chain reaction is generated. The uncertainty of the printers is transferred to the publishers. They warn that “it may be difficult to print books”, details Henrique Alvarellos, president of the Galician Association of Publishers (AGE). It is not something dramatic. Yes the beginning of a situation that dates back to September. In that difficult balance between supply and demand, the price of paper skyrockets 25% so far this year. “The paper had to go up because the factories cannot bear the cost of the rise in electricity, chemicals, and production. The option is either to raise the price or to stop factories temporarily, like Stellantis ”, analyzes Lucía Pastoriza, CEO of Gráficas Anduriña. But the last option would definitely affect the inventory available to the industry.

The paper and cardboard that Spain receives comes mainly from Finland, France and Germany. What comes to determine that the import is European. There is also national production, mainly Catalan. It happens that the number of coated paper manufacturers, the one used by publishers, has contracted in recent years, explain sources from Sgraf Artes Gráficas. What has led to a concentration of the volume of work in fewer hands. And in the face of such complex casuistry, the printers that used to work placing orders based on demand have started to stockpile paper, partly out of fear of shortages, partly out of caution in the face of rising prices. “We have to make decisions to guarantee the work to our clients”, say from Sgraf Artes Gráficas. “There are many problems with the paper reserve. The prices are open. It is almost a fish market ”.

As a rule, purchases were made from distributors. Now, with large orders, printers turn directly to the manufacturer. “They don’t guarantee you anything, not even the purchase price. This generates a lot of uncertainty in the market ”, reflect from Sgraf Artes Gráficas. In a context of insecurity, the just in case prevail. Added to the lack of paper supply is a greater demand for the product to guarantee productive continuity. A whiting that bites its tail and that gives wings to prices.

“Nothing is going to happen because we are all getting wet. But we hope that it is only a dip and does not have more implications ”, they point out from Sgraf Artes Gráficas. “But in this, who can guarantee anything?” For the publishing sector this situation does not make if not to delay the publication calendars. November and December are usually two difficult months to print, due to the high workload. But “printers are beginning to give longer than normal terms,” ​​reveals Alvarellos. The solution has been to try to schedule production with more time, anticipating that there may be delays. “We need to foresee the longer-term runs,” determines the spokesperson. If the situation worsens, other measures will have to be taken.

Another side effect of the lack of paper supply and the price spiral is that customers are reducing orders. “The one that was going to do 5,000 jobs does 4,000,” says Romay. There are also those who wait until a drop in paper prices. Because if the production costs began to rise with the wire and the inks, now this other ingredient is also added. “The key will be to reduce runs and adapt to the available stocks,” says Romay. Because there is certainly no forecast that the situation will rebuild until the second half of 2022, Pastroriza influences. The prospects for the future suggest that the rise in prices will remain. In an environment where consumption is skyrocketing, production systems are still warming up after the pandemic.