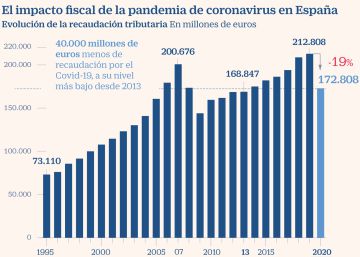 Spain ended 2019 breaking records of tax revenue, with a total tax collection of 212,808 million euros. The amount represented an advance of 2%, moderate compared to 7.6% the previous year, which replicated the increase in GDP and foreshadowed some additional advance due to mere inertia this year, when the economy was expected to advance 1.6 %. The Covid-19 coronavirus pandemic, however, has put an end to this scenario and, while the International Monetary Fund (IMF) already foresees a loss of 8% of Spanish GDP this year, the General Council of Economists and the Registry of Fiscal Advisory Economists (REAF) advanced yesterday that, with the economy falling by 5%, the decrease in tax collection in 2020 will be 40,000 million euros.

“It is a tremendous collapse,” Luis del Amo, REAF’s technical secretary, valued yesterday in a telematic meeting with the press about the fiscal situation in which he illustrated that this drop in income returns the country to the lowest collection levels since the year 2013.

As with the projected decline in GDP, the verticality of the fall in income is unprecedented in Spanish democracy. If fulfilled, the loss of 40,000 million would be equivalent to a drop in the collection of 18.8% over the 2019 figures. The biggest crash to date had been in 2009, when the previous crisis brought down the collection of 17 % (29,430 million less) that overcame the decrease already registered in 2008, of 13.6% (27,223 million) after the maximums reached in 2007, the year of culmination of the economic boom.

In parallel to this effect, the General Council of Economists recalls that the Government has announced the mobilization of more than 120,000 million public euros. Although 100,000 are guarantees that will not be disbursed unless the companies financed with them default on the banks, the reduction in the size of the GDP and the rise in spending that is taken for granted could already raise the public deficit of 2.6% of 2019 at 11.88% (to 142,800 million). If we add that “the collection, due to the decrease in activity and income” would fall to around 170,000 million, a deficit of about 182,800 million would be reached, equivalent to “15.21% of GDP, with the consequent increase in public debt ”, they estimate.

The calculations of the General Council of Economists and the Reaf coincided in time with the publication of the fiscal report of the International Monetary Fund, which announced that it foresees that this year’s public income in Spain will go from 39.3% of GDP to 36.8% (also in this case a loss of more than 30,000 million euros). In turn, the increase in spending would almost double that amount, going from 41.9% to 46.3% of GDP (55 billion more).

As a consequence of this imbalance, the IMF estimates that Spain’s public deficit would rise from 2.6% to 9.5% in 2021, a somewhat more optimistic figure than that of economists but equally capital. From there, the rebound of GDP to 4.3% in 2021 would allow the fiscal hole to be reduced to 6.7%. In either scenario, the explosive mix of more spending with lower income seems warranted.