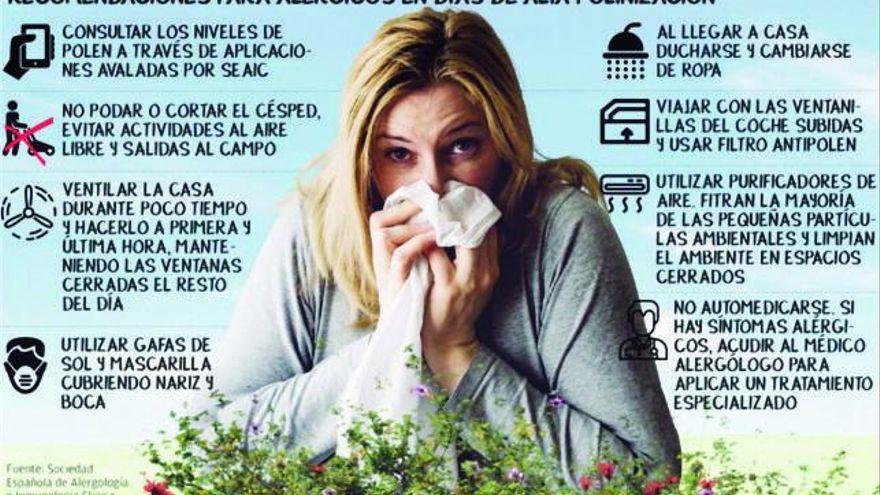 The pandemic has become an unexpected ally of the more than eight million Spaniards suffering from pollen allergies. If forced confinement – which minimized exits to the open air and also lowered levels of contamination– Last year, allergists hardly saw patients in their consultations, is spring they also expect a lower incidence. When using the face mask –Which from the Spanish Society of Allergology and Immunology (Seaic) believe that it will significantly reduce symptoms– adds in the case of Galicia some forecasts that speak of low pollen concentrations for this spring. “Those allergic to grasses will face a mild season in the Galician community,” they pointed out this week in the Seaic. “We are looking forward to a quiet season because the mask will act as a barrier and reduce the symptoms of rhinitis or asthma,” adds Alicia Cosgaya, allergist from the Complexo Hospitalario Universitario de A Coruña (Chuac).

The rainfall, temperature and humidity recorded during the fall and winter influence the pollen concentration that will be in spring and is what experts use to predict what the season will be for allergy sufferers. With the data collected in the 62 aerobiological stations of the Aerobiology Committee and those offered by the State Meteorology Agency, the Spanish Society of Allergology this week made its forecasts for the spring that has just started in relation to grasses, the star allergen since it is what almost 90% of those allergic to pollen react to. In the case of Galicia and the Cantabrian coast, “allergy sufferers will face a mild-moderate spring, which will range between 1,000 grains per cubic meter in A Coruña and 4,500 in Oviedo,” they indicate in the Seaic where they specify that the concentration of pollen will be “mild” in the whole of Galicia.

That does not mean that there are no high concentration peaks of this and other plants throughout these months. In the last week, according to the Galician Allergy Society, A Coruña and Vigo registered high levels (more than 20 grains per cubic meter) of urticaceae such as nettles. Vigo is the season in which more pollen grains have been collected in the air (573), followed by A Coruña (570), where there is also a moderate level of pine pollen. “There are many differences from one area to another. On the coast the parietaria is quite frequent, which is already beginning to be seen and that pollinates until autumn, it is almost perennial. In addition there is also already some birch and pine, although not very relevant “, indicates Cosgaya, who recognizes that Galicia is not an area with a lot of allergy to pollen – something that does occur in the center of the Peninsula – and that grasses,” levels do not begin to be seen here until the months of May and June ”.

But regardless of where you live, allergists are clear that this year there will be less rhinitis and asthmatic attacks derived from pollen allergy thanks to the widespread use of the mask. “It will help reduce symptoms due to the screen effect on the nose and mouth. As a consequence, there will be a reduction in the consumption of medication and a decrease in the attendance to emergency services by the pollen ”, points out the president of the Aerobiology Committee of the Seaic, Ángel Moral. “It will not happen like the flu or bronchiolitis that has disappeared. There will still be people with allergy symptoms but these will be reduced because the mask acts as a barrier ”, adds the Galician allergist Alicia Cosgaya.

So should the mask be something allergy sufferers turn to every spring when the pandemic is over? Experts assure that they have been recommending them for years in areas with very high specific concentrations – such as Madrid or Barcelona in March and April for the shaded banana or Jaen in May for the olive tree – but that until now they have not been very successful.

“Due to the rejection that they produced until last year, for fear that the rest of the people thought that it could be an infected person, they had been underused,” says Moral, who recalls that already last year thanks to the confinement and the reduction of air pollution by lowering mobility and industrial activity, allergy sufferers had a better spring.

Beyond the use of the mask, doctors advise ventilating the house in the morning and closing at night (when pollen levels are highest), travel by car with the window closed, check the predictions before making an outdoor plan, or wear sunglasses to try to reduce the number of allergic episodes. In addition, they recall the importance of immunological treatment, through vaccination between 3 and 5 years and “that is the only thing that can cure this disease,” says Cosgaya, who acknowledges that after this treatment, many allergy sufferers hardly have any more symptoms and is a good option for those with more serious symptoms. “There are those who have a good quality of life, with specific symptoms and other people with symptoms almost every day, who do not improve with medication or asthmatics who have a worse time and in those cases it is good to consider the vaccine,” he says.

The Spanish Society of Allergology assured this week that the percentage of people allergic to the most common pollens has doubled in just ten years: from 35 to 74% in grasses or shade bananas from 7 to 14%. The reasons, they say, must be found in climate change and increased pollution. Emissions from heaters or diesel engines act on pollen, making it more aggressive and increasing its ability to cause allergies in susceptible people. That would explain, according to doctors, that there are more cases in cities than in rural areas. “And climate change also affects as it causes plants to start earlier and delay flowering, which means that there is more time for pollination,” they explain from the entity of allergists. They are clear about it, despite everything, for the second year in a row, spring will be more bearable for allergy sufferers.

The keys to the coronavirus in allergy sufferers

The pandemic and especially the start of vaccination against COVID has triggered inquiries from those allergic to pollen. For this reason, the Spanish Society of Allergology has published a guide to resolve all kinds of doubts.

Can people allergic to pollen get vaccinated against COVID?

Yes, experts say that suffering from respiratory allergies, rhinitis or asthma “does not entail an increased risk of reactions to currently available vaccines against coronavirus.”

Can I receive the injection if I am in an allergy crisis?

As with all vaccines, if the patient suffers from acute allergy symptoms, that is, they are of a certain intensity, it is appropriate to postpone immunization until they have mild symptoms or are already asymptomatic.

If I get vaccinated against allergies, can I also do it against COVID?

Yes, they are compatible. Of course, if the allergy vaccine is injected, it will be necessary to wait between 7 and 10 days between it and the COVID vaccine and it is better to choose to inject it into different arms. If it is the sublingual vaccine, it is advisable not to administer it on the same day as the COVID immunization or in the following week.

Are those allergic to pollen more at risk of catching coronavirus?

No. The Seaic assures that the studies carried out this year indicate that they are not more likely to become infected or to develop more serious symptoms in the case of contagion. The same goes for asthmatics.

Is it possible that pollen favors the transmission of the virus?

A German study that analyzed the concentration of pollen and the number of infected COVID in 34 countries reveals that when pollen levels increased, so did the number of infections within a few days. From the Seaic they recall that this phenomenon occurred especially in areas with a high population density, so there may be other factors that influence. They believe that more studies are needed to see if this theory holds.