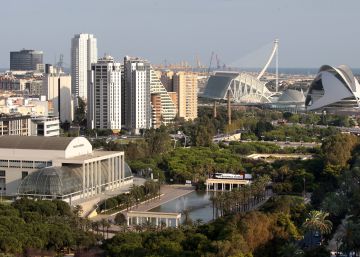 The Palau de la Música of Valencia, a cultural site governed by the City Council and opened 32 years ago, will undergo a profound renovation after roof landslides that occurred at the end of June in one of its auditoriums. "The music continues, the Palau does not close," said its officials on Wednesday, who have already announced that next season's programming – from October 2019 to June 2020 – will move to other venues in the capital.

On June 29 the ceiling of one of the rooms fell, sowing the alarm and forcing the enclosure to relocate some of the actions of the Valencia Jazz Festival which was celebrated during those dates. Municipal firefighters and other specialists concluded that the damage was caused by the air conditioning system that was installed more than three decades ago above the characteristic wooden ceiling of the auditorium.

After the crisis, the head of the Palau de la Música, the councilor Glòria Tello, explained today that, after consulting the architectural studio that conceived and executed the work in its day, the air conditioning of the enclosure will be renewed – the second most Energy consumption has the census of municipal facilities in Valencia— and, incidentally, will be used to renew the seats, acoustic panels and other elements of the building.

"At the moment, the specifications are being drafted to undertake the work, not only in the Rodrigo room, where the damage occurred but also in the main one, the Iturbi, which although it has not presented any problem, has the same system", said the councilwoman, who has not given a budget or the duration of the works. "When the specifications are over, we can specify more things," he said.

The municipal government is reluctant to pronounce the word closing but the truth is that those responsible for the Palau have negotiated in recent weeks with other cultural venues in the capital, such as Palau de les Arts or the Congress Palace, the transfer of 60% of the programming of its next season, which takes place from October 2019 to June 2020. The relocation of concerts is going well, although there is another 40% of the programming to be specified.

According to the councilwoman and the director of the Palau, Vicente Ros, it is not the first time that the enclosure closes. It was already done a few years ago for the last rehabilitation. Nor is it the only culture container that is affected by damage to its facilities. It already happened a few years ago to the Palau de les Arts, when it flooded. And it also happened to the RTVE Orchestra, which had to move its concerts to the Escorial due to the renovation works of the Monumental Theater.

The Palau de la Música of Valencia, with about 800 subscribers, will inform in September of the relocation of the concerts and those responsible do not rule out readjusting the tickets or even creating others based on the new planning. "The subscribers will have their music and the Valencia Orchestra will continue rehearsing in a building annexed to the Palau, the result of the last extension," said the governor.

The spokeswoman for the Municipal Group of the Popular Party in the Valencia City Council, María José Catalá, asks for "a comprehensive audit of the Palau de la Música" while she has asked the mayor, Joan Ribó, of Compromís, to "get to work to open its doors as soon as possible. "

In response to criticism from the opposition, which has denounced lack of money in maintenance of the premises, the president of the Palau de la Música has assured that only from 2016 to 2018 more than 1.5 million euros have been invested in the auditorium, 700% more than allocated by the previous municipal government of the PP.