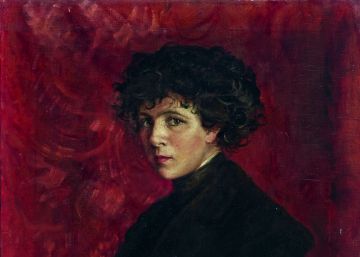 After two years of intense preparations and with more than 100 works ready to be placed on the walls, the female artists who, in a massive way, were going to occupy their rightful place in the Prado Museum will have to keep waiting. Guests. Fragments on women, ideology and plastic arts in Spain (1833-1931) should have been inaugurated on March 31, but it could not have been. As a cruel metaphor for what has been the disdain and forgetfulness towards art created by women, the ruthless virus has managed to continue its confinement. The one that was destined to become the spring and summer exhibition in Spain will surely have to wait until autumn.

The exhibition, curated by Carlos G. Navarro, expert in 19th century painting, moves between the reigns of Isabel II and her grandson, Alfonso XIII. The hundred long works that comprise it explain what has been the role of women artists in that period through painting and other artistic disciplines such as sculpture, drawing, engraving, photography, miniatures, embroidery or cinema. Almost all the works collected in the sample are the property of the museum and until now were stored in a warehouse outside the main venue.

Pending its future opening, the exhibition itinerary is ready. The first work of the tour is a perfect image of the contempt for the woman artist. It is a family scene painted by the Granada-born Concepción Mejía de Salvador. Coming from Reina Sofía, the canvas is so deteriorated that the characters are barely recognizable and cannot be restored because there is no documentation on the painting. It is little more than a blur that serves to delve the viewer into an interested story about the estrangement of the woman artist throughout the XIX and the first part of the XX. Spread over two rooms of the Jerónimos building, the exhibition is divided into eight sections. The curator Carlos G. Navarro tells that there is a first part of paintings signed by men with which the official history is built, with works made by men for the indoctrination of the State. When the woman appears, always as a guest, it is to extol the atmosphere of historical casticism where the bride, mother or daughter are something as pompous as musty.

Already in the second part, there are works made by women who, on many occasions, had to sign with a pseudonym, mere initials or the name of the husband. There are some curiosities such as the version of the Virgin of the bird made by Isabel II. But above all there are important discoveries such as Antonia de Bañuelos, portraitist of the European nobility, Marisa Roësset, from whom it has been possible to recover a splendid full-length self-portrait or Julia Alcayde Montoya, which will show some of the still lifes with which she managed to be awarded in the artistic contests of the time. But, beyond the works, the curator maintains that the most fascinating thing about the exhibition will be being able to show that the desire for 19th-century bohemia is in the lives of women artists. “They were heroines with the aura of losers. Despite knowing that they had everything to lose, they dedicated their lives to the cause of art, ”says Navarro. The exhibition will close with a gem from the history of cinema filmed by a pioneering director like Alice Guy Blaché in 1896: La Fée aux Choux (or The cabbage fairy), a French fairy tale where it is said that boys are born in cabbages and girls in roses.

First glance: Selection of works from the exhibition The guests, in the Prado Museum (Madrid).