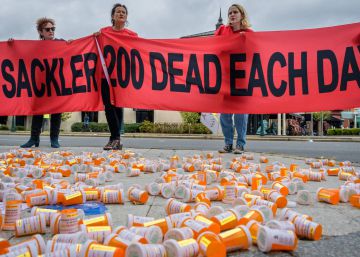 Suddenly we learned that some very popular medications in the United States and that many perceived as the Holy Grail against pain had a dark face, so dark that they have killed more than 400,000 people in two decades. There are many deaths to go unnoticed for so long. How is it possible that public health agencies and drug control systems did not detect the problem in time to avoid havoc of such magnitude?

What happened alert about the low capacity of science and public health services to influence certain health problems when what prevails are market dynamics. The emergence of new opiate derivatives in the 1990s meant an advance in pain control. But the ease of access to drugs such as fast-release fentanyl, which has a high addictive potential, coupled with a culture of poor tolerance, not only pain, but the slightest physical discomfort, and aggressive advertising by the Pharmaceuticals caused consumption to skyrocket to the point that even in 2015, when all alarms had been raised and controls had tightened, a sufficient amount of opiates was prescribed to keep 320 million Americans drugged for three weeks. When they wanted to stop the abuse and control the prescription, millions of Americans were already addicted. Then a buoyant black market flourished that someone provided and with the crisis, things got worse: those who could not afford the high prices went on to consume heroin directly.

In the macrocause initiated by this disaster, several pharmaceutical companies and distribution companies are accused of not having exercised the control they should have over the use of their products. Therein lies precisely the problem: those in charge of fighting and preventing adverse effects were the same as those who did the big business with the lack of control. Now, the federal judge that takes the case seeks an agreement between the plaintiffs and the imputed companies that some sources place around 50,000 million dollars.

The figure may seem exorbitant, but it is within the typical parameters of the US criminal system. It is a legal approach consistent with a culture allergic to public controls and that sacralizes individual and market freedom. A system that shows a great permissiveness in the confidence that each one will do what he has to do because he knows that if he does not, he will pay it dearly. While high compensation can have a general deterrent effect, when a serious infraction with health effects occurs it is lethal. It costs a lot to intervene and sit on the bench for the guilty. And in the meantime, the damage continues to progress. We saw it in the great causes against tobacco companies and also in the case of Vioxx, an anti-inflammatory drug that was marketed for years even though previous studies had detected cardiovascular adverse effects. By the time the authorities decided to withdraw it from the market, there had already been between 88,000 and 140,000 cases of death due to heart attack or severe coronary disease.

What will the people of Ohio, the state most affected by the opioid epidemic, be now going to help the pharmacists and marketers pay millionaire compensation? The Administration will have more resources to deal with the epidemic and there will be compensation, but how can a lost life be compensated? How can you compensate for all those deaths that could have been avoided?