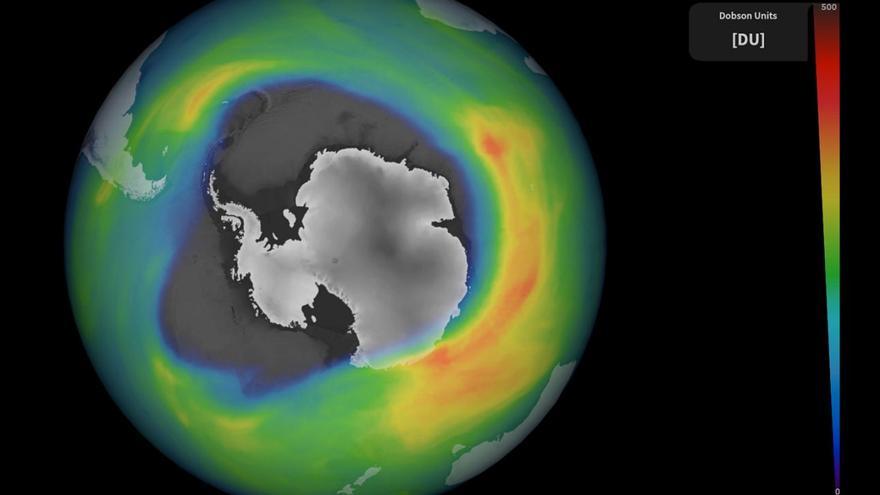 During spring in the southern hemisphere, from August to October, a hole forms in the ozone layer over Antarctica, reaching its maximum between mid-September and mid-October.

Later, when temperatures high in the stratosphere begin to rise in late spring in the southern hemisphere, ozone depletion slows down, the polar vortex weakens and finally breaks up, and in December, ozone levels usually return. to normal.

Today in the International Day for the Preservation of the Ozone Layer, the Atmosphere Surveillance Service (CAMS) of the European program Copernicus has offered an update on the size of this stratospheric hole, as well as the ozone layer that protects the Earth from the harmful properties of the sun’s rays.

After a fairly normal start, the ozone hole of this 2021 has grown considerably in the last week, and has already reached an extension greater than that of Antarctica, exceeding in size 75% of the ozone holes in this phase of the season since 1979.

A hole similar in size to last year

According to account Vincent-Henri Peuch, director of the Copernicus Atmospheric Monitoring Service, “This year the ozone hole has been developing as expected during the beginning of the season, it seems quite similar to last year, which was not really exceptional either. in September, but then it became one of the longest-running on record. ”

The hole in the ozone layer of this 2021 has grown considerably in the last week, and has already reached a greater extension than that of Antarctica

“The vortex is quite stable and the stratospheric temperatures are even lower than last year, we are facing a fairly large and potentially deep ozone hole,” warns Peuch.

CAMS monitoring of the ozone layer uses computer modeling in combination with satellite observations, similar to weather forecasts, to provide a complete three-dimensional picture of the state of the ozone hole.

For this, this service combines different elements of information available, such as measurements in the ultraviolet-visible part of the solar spectrum, which are of very high quality, but due to lack of light, they are not available in the region that is still at night. polar.

Also included is another set of observations that provide crucial information on the vertical structure of the ozone layer, but which has limited horizontal coverage.

Since the ban on halocarbons, the ozone layer has shown signs of recovery, but it is a slow process and it will take until the 2060s or 2070s to see a complete elimination of the substances that promote their elimination.

By combining five different information sources together using its sophisticated numerical model, CAMS can provide a detailed picture of ozone distribution with a consistent total column, profile and dynamics.

Since the ban on halocarbons (such as CFCs) the ozone layer has shown signs of recovery, but it is a slow process and it will take until the 2060s or 2070s to see a complete phase out of the substances that deplete it.

As indicated by the Copernicus program, it is essential to maintain surveillance efforts to ensure that the Montreal protocol (an international agreement to protect the ozone layer) continues to be met.