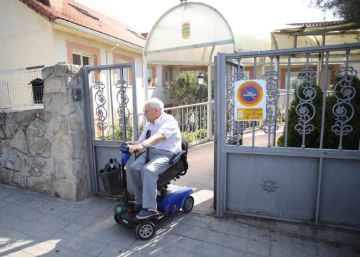 There are many unknowns to solve in this new case of scam in two nursing homes. On this occasion, there are two Burgos centers run by two people, who have been detained by agents of the National Police accused of embezzling up to three million euros to some of their patients. They allegedly inherited their assets through deception.

The detainees took advantage of the physical and cognitive deterioration of the elderly they cared for in order to appropriate all of their assets, "notes the press release of the National Police. "They came to name their victims as administrators of the societies with which they had formed a complex business framework with the main purpose of seizing the inheritance of their patients," say the same sources.

According to the investigators, at the time of the arrest the investigators had in their name a total of 30 properties, among which there were homes, warehouses and various rustic farms located in the province of Burgos and in other areas of the Spanish geography.

The police accuse them of fraud, misappropriation, documentary falsity, crime against moral integrity and money laundering. The Territorial Management of Social Services of the Junta de Castilla y León has collaborated in the investigation, still open.

According to the police note, and in the absence of the data provided in the press conference by the Government delegate, "the investigation began earlier this year when agents learned that several people could be cheating a multitude of elders with a great personal heritage. "

Housing, jewelry and works of art

The first inquiries served to find out that those arrested were in charge of the management and management of two residences for senior citizens in Burgos. "The agents discovered that these people took advantage of their position of superiority to deceive and cheat their users. Taking advantage of their physical and cognitive deterioration they managed to appropriate all of their assets." In fact, as the same sources point out, they appropriated jewelry, works of art, furniture and even photographs.

The Police have carried out four searches in the two residences investigated, as well as in an industrial building and in the domicile of the detainees. "These actions have involved a large amount of documentary material, computer devices, mobile phones, 6,300 euros in cash, antiques and works of art. Three vehicles have also been located and seized, one of them high-end with retail value public exceeding 130,000 euros, and another with the necessary modifications to perform sports races. " The researchers do not rule out the emergence of new possessions in his name from other patients.

During the investigation they also discovered "a flat that the detainees had fraudulently enabled as a nursing home, without complying with the legal requirements established for this type of socio-sanitary provision," notes the note. In it, 900 tickets and lottery shares were seized worth almost 20,000 euros. Investigators suspect that "the final destination could be to mask activities related to money laundering."

The investigation is still open in order to locate the total inherited heritage through deception that could be found under other ownership and to locate other possible harmed.