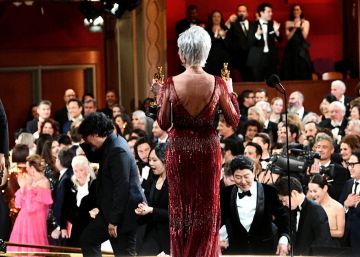 The same gala in which Parasites made history in the Oscar It will also go down in history as the least seen of the 92 years of existence of these Hollywood awards. The ceremony, which for the second consecutive year did not have a presenter and was broadcast by the ABC open network as usual in 1974, was seen by 23.6 million viewers, which means a 20% drop compared to 2019 (followed by 29.6 million viewers). The previous negative record was held by the 2018 ceremony, seen by 26.5 million viewers.

"The audience is going down on generalist television globally, but, at the same time, we find that the Super Bowl another great event broadcast on television, has slowed its downfall of viewers, "says Concepción Cascajosa, professor of Audiovisual Communication at the University Carlos III of Madrid." This is because the program has managed to expand the profiles of its audience. Being a sports broadcast has traditionally a very masculine audience, but among the interest by the ads [es el espacio donde más cara es la publicidad] and the musical performance[whostarredthisyear[queesteañoprotagonizaronShakira and Jennifer López], they reach more people. "

The Oscars, however, maintain their traditional awards ceremony structure. "There is nothing that interests other ethnic communities, or even differentiates between men and women," Cascajosa laments. "In fact almost the opposite happens: every year they reward films that are not big blockbusters, but niche work and authors, such as Moonlight or Parasites, which works very well at the box office but only as a foreign film. That is key. "

It is a complicated time for awards deliveries on traditional television. The Grammy, the music awards, were delivered on January 26 at a gala that broadcast the CBS network. It was presented by Alicia Keys and had 18.7 million viewers, 6% less than last year. In this case, CBS hastened to announce that the audience on its platform streaming, CBS All Access, was 30% higher than the previous year (they did not provide spectator figures).

Like every great event, the Oscars have their natural home on television. But critics demand that, in return, it be a good program. "It was easy to lose the thread with the million distractions they showed thanks to the frantic and sometimes puzzling production decisions of the ABC network," wrote Caroline Framke, television critic of Variety

"As a show, many integers have been losing," Cascajosa continues. "It used to be an entertainment program with music, humor and a charismatic personality. Now they have lost that element and prioritize the delivery of the awards, with which the viewer loses interest. It is a very fragmented program: every five minutes you have new protagonists . Think this year, where a strong dish was the connection between Eminem. What connection did he have with movies?