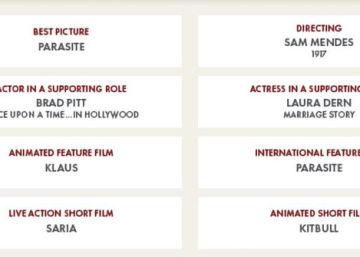 The oscars They closed their vote yesterday to choose the winners of their 92 edition, but the end of the deadline came with a small controversy after the official Twitter account of the awards published what appeared to be a list of their favorites for the awards. The profile of the Hollywood Academy in this social network, where it has 3.4 million followers, on Monday encouraged tweeters to share their favorite candidates for the gala to be held on Sunday. For this they presented the “Oscars Prediction Experience”, an application that allowed to fill out a ballot and share it on the social network.

However, the Academy account published on Monday at least one tweet with a list of Oscar favorites without any message accompanying it except for the title My predictions for the Oscars, so it could be interpreted as the list of candidates that the institution supported for the ceremony. The specialized medium Deadline made a screenshot of one of those tweets, before the Academy deleted it, and in which Parasites, by Bong Joon-ho, appeared as the best movie, Sam Mendes as winner of the best director award, for 1917, Joaquin Phoenix as best actor for Joker and Renée Zellweger as best actress for Judy

That message caused some controversy on Twitter, so the organization posted another message to clarify the situation. “We invited fans on Twitter to make and share their predictions for the Oscars. A lot of you have done it! A small problem on Twitter made some of your predictions look like they came from our account. It wasn’t like that. This error has been resolved. We will reveal our elections on Sunday, “said that message.

A ton of you already have! 😀

They didn’t. This error is now resolved.

And we’ll reveal our picks on Sunday.

Although someone was determined to see there a sign of the real winners of the Oscars and a huge failure of the organization to reveal them beforehand, the truth is that the vote among academics had not yet closed, so it was impossible that the Monday the names of the winners were known. What the Academy did officially announce yesterday is that singer and actress Janelle Monáe will have a special performance at Sunday’s gala.

Joker, with 11 nominations, party as a favorite for a ceremony to be held at the Dolby Theater in Los Angeles with other leading applicants such as The Irish, Once upon a time in … Hollywood Y 1917, all with 10 nominations per head. The gala has three Spanish candidates: Pedro Almodóvar, who competes for the best international film with Pain and glory; Antonio Banderas, who opts for the best actor award for the same film; Y Klaus, by Sergio Pablos, Oscar nominee for best animated film.