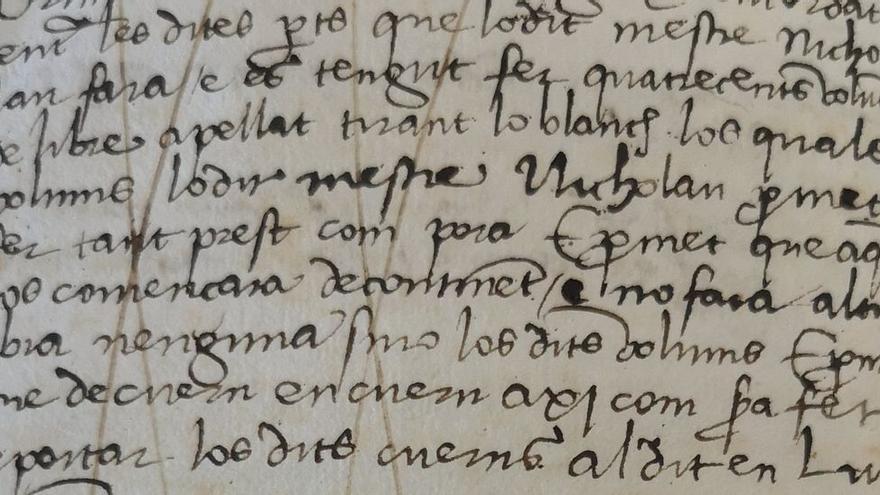 Its finding is really an “anecdote”, as Peris herself acknowledges, since the document had already been cited by the group of medieval historians Harca or by the historian Josep Sanchis Sivera at the beginning of the century. However, the young Valencian woman considers it to be a “little known” document of “great historical relevance.” That is why Peris decided Publicize your finding on the networks.

The document of l’Arxiu del Regne.

Specifically, the document specifies that Joan Cervelló, notary of King Ferdinand the Catholic, Luís Bertran, a very influential merchant, and Pere Tranxer, one of the most prominent booksellers of medieval Valencia, commissioned the printing of the Tirant lo Blanc to Spindeler, “Barcelona’s master of print books” of the time and based in Valencia. The bookseller was in charge of financing all the paper. “Although it was already known, the contract shows the impulse of Tirant from the most influential classes. There were important people behind its publication and distribution, “explains Peris, who also points out that everyone in the contract took for granted that the work was going to be very successful.” The document also includes the distribution of the profits, which implies that they know that the work is going to sell very well. What’s more, ordering 400 copies is really outrageous for the time, “he says.

Although it is even more surprising that the printer was forced by contract to dedicate himself full time to Tirant. “Spindeler promises to finish the job as soon as possible. As he writes, he will start immediately and will dedicate himself exclusively to printing Tirant lo Blanc.”

The printer he charged 75 ducats for his work, which lasted a year. The novel was published on November 20, 1490, becoming the masterpiece of Valencian literature and one of the most outstanding chivalric novels.

The Spindeler printer, one of the most reputable of the time, charged 75 ducats for his work, which lasted a year. He promised to work only on the work to prioritize its distribution. The ‘Tirant’ was finally published on November 20, 1490, becoming the masterpiece of Valencian literature and one of the most outstanding chivalric novels. The work of Joanot Martorell was translated years later into Spanish.