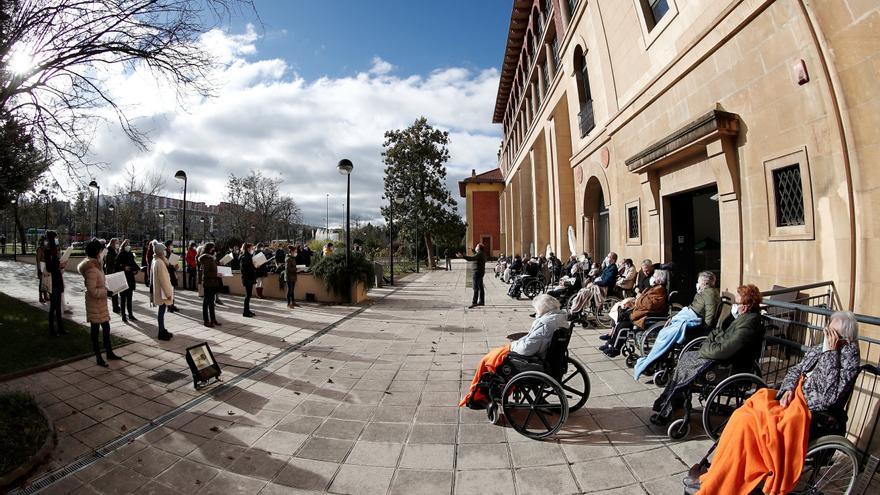 Pamplona, ​​Dec 26 (EFE) .- The Orfeón Pamplonés and its Youth Choir have starred this Saturday in three performances outside the residences for the elderly in the Navarrese capital, concerts "at home" with which they wanted to pay tribute to one of the most vulnerable groups in this pandemic situation.

Separated at intervals of half an hour, the gardens of the residences of the Little Sisters of the Poor, the House of Mercy and Amavir Oblatas, have been the peculiar settings of three concerts of popular Christmas carols, which have been rewarded by the applause of many from the residents who, sheltered outside, or from the windows inside, have followed the melodies.

"Adeste Fideles", "Silent Night", "Towards Bethlehem goes a donkey" or "Ator, ator" have been some of the popular Christmas carols that have been sung by the choralists and members of the Youth Choir in small groups and maintaining safe distances , both among singers and facing the residences.

As explained by the Orfeón Pamplonés, with this gesture they want to honor these most vulnerable groups with their Christmas music, especially at Christmas.

The Orfeón Pamplonés is one of the most veteran and prestigious European choral groups, which has visited some of the most important auditoriums in the world such as Carnegie Hall, Lincoln Center, Théâtre des Champs Elysées, BBC Proms or the Saint Petersburg White Nights Festival.

The Orfeón, which had to cancel and postpone numerous concerts since confinement, continued rehearsing through the zoom platform so as not to stop its activity, so that on May 29 it returned to perform with a tribute to the health workers and continued during the summer performing outdoor performances.

Currently, he has transferred a large part of his rehearsals to the Navarra Arena facilities to meet the capacity conditions, and he conducts the classes of his Choral School in a blended way. All its components, singers, conductor, pianist, sing and rehearse with masks.

During this season, the Orfeón Pamplonés has performed works such as Fidelio, by Beethoven, together with the Navarra Symphony Orchestra, a concert that was broadcast by Navarra Televisión as it could not be performed with an audience. Likewise, on December 3 he performed Beethoven's Ninth Symphony, which was also broadcast in this way.

In March he will perform, also with the OSN, Begräbnisgesang and Nänie, from Brahms. In April, and together with the Madrid Symphony Orchestra, Carmina Burana, by Orff, will perform with her Escolanía, made up of boys and girls between eleven and sixteen years old.