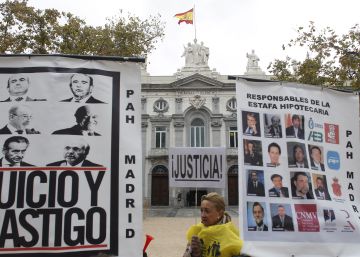 The attorney general of the EU Court of Justice concluded yesterday that the use of the IRPH index in mortgages can be canceled if it was marketed without due transparency, and detailed how to prove it. These are some of the keys of his opinion:

What is the IRPH index?

The IRPH index (Reference Index of Mortgage Loans) is a variable that Spanish banks use to set the price of some credits based on the average interest rate applied by the entities in the new mortgages they grant. There was a specific one of boxes and another of banks that gave way to a single one. It is an alternative to the Euribor, used in 90% of mortgages, which unlike that is calculated by the type at which banks lend each other.

What effect did it have on mortgages?

The bank used to market IRPH as a more stable rate than the Euribor, which in the boom exceeded 5%. But the outbreak of the crisis and the ECB measures led the Euribor to negative while the IRPH barely dropped 2%. This is a difference of up to 300 euros in monthly payments and 25,000 euros per mortgage, according to Asufin.

Why was the Supreme pronounced?

The difference with the Euribor led consumers to sue the bank for the higher cost of this index and the lack of transparency with which it was commercialized. The matter eventually reached the Supreme Court that in December 2017, in a case about Kutxabank, it ended up endorsing the use of IRPH, as an official index accepted by the Bank of Spain, for which, it assumed, transparency control should be limited to a wording "Clear and understandable" and reflect the cost of credit. The ruling had a particular vote of Javier Orduña, to which another magistrate joined, demanding a further examination of its opacity.

Why does the CJEU now pronounce?

The Supreme Court's criteria were questioned in lower instances that ended up consulting the Luxembourg Court.

What does the EU general lawyer say?

The Polish Maciej Szpunar, a kind of attorney general, concludes that the IRPH clause is not excluded from the scope of the Community directive and can be subjected to a transparency analysis beyond its comprehension. It points out that this index is only one of several options to choose from and that being a “complex mathematical formula and not very transparent for an average consumer”, it requires that the entity that markets it informs the client of the type of reference that is, how it is calculated and How it has evolved in the past. Only in this way, he says, will the consumer understand the consequences of the credit. Szpunar, of course, leaves it up to the Spanish judges to decide if the entities meet the transparency requirements due.

Is it a blow to the bank?

Not at all. Although it opens the door to new litigation against the sector claiming to evaluate the transparency of the IRPH of each entity, the attorney general believes that in the case he analyzes, Bankia complies.

What consequences does the opinion have?

The court is usually guided by the conclusions of the lawyer to issue his sentence, although this axiom is not always met, as happened in the case of the ground clauses. The final ruling is expected by the end of the year or early 2020.

What other criteria will the court follow to pass judgment?

The court will also be guided by the claims of the bank, which defends the use of the index; the Spanish Government, which also does so and asks that in any case the ruling is not retroactive; of the European Commission, which considers IRPH abusive because of its opacity, and of consumers, along the same lines.

What will happen if the sentence repeats the conclusions of the attorney general?

First, the criterion would apply to the specific case raised to the CJEU, that of a Bankia mortgage that is judged in Barcelona. From there, the European Court's criteria apply to all Spanish courts, which will eventually cause all IRPH judicialized cases to be evaluated under the prism that the Luxembourg Court prints upon its ruling. Often, in any case, the criterion is not fixed until such a case reaches the Supreme Court, which on this occasion should review its previous jurisprudence. The foreseeable thing is that from the pronouncement the judicialized cases are reviewed case by case.

Would the use of IRPH be completely canceled?

A ruling against the bank would definitely unleash a flood of demands, although foreseeably it would be necessary to study on a case-by-case basis to verify when there were bad practices in its commercialization. Everything will depend on the transparency criteria that are requested. Thus, although the attorney general goes further than the Supreme in his control and demands that the bank deliver to the client an evolution of the IRPH in recent years, the truth is that the sector was obliged to do so by a directive of 1990, with what that many could pass that cut despite being forced to undergo a transparency evaluation. In any case, in Spain it is estimated that one million mortgaged people are subject to IRPH and a ruling in their favor would foreseeably have retroactive effects.