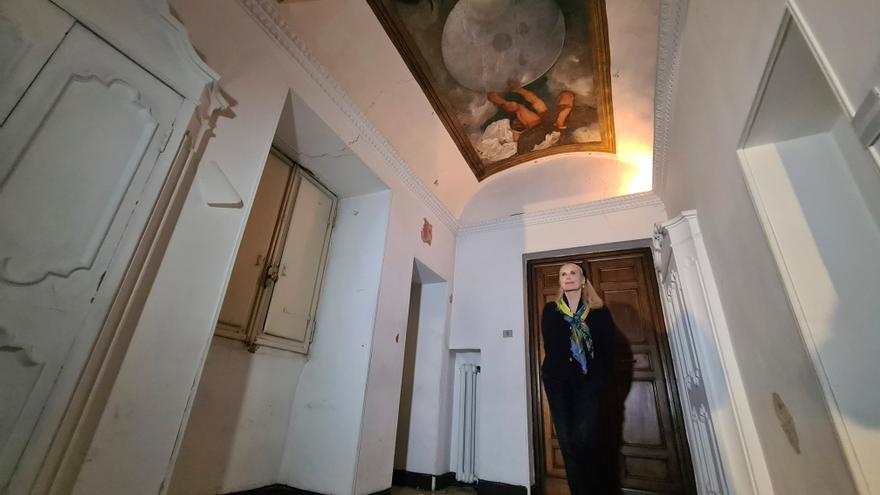 In a dark room of a Roman villa the only known mural of Caravaggio. This painting, which has survived the centuries, is the greatest treasure of a palace that will now be auctioned to settle a debt of its noble owners, among them the widowed ‘princess’ who inhabits it, surrounded by memories.

“Living here is quite lonely since my beloved husband died, but it is also a great honor and responsibility“the heiress Rita Jenrette, a blonde actress from Texas, the third wife of the aristocrat Nicolò Boncompagni Ludovisi, who died in 2018, assures Efe.

The Villa de la Aurora, as it is known, is a fascinating place. Not only for his architecture -a building of 2,800 square meters spread over six floors and with a wonderful garden in the heart of Rome- but for its impressive artistic heritage.

In its vaults you can see frescoes and murals of the great masters since the ‘Cinquecento’, such as the allegory of the Aurora by the great Guercino, as well as dozens of portraits of the great men of the Lodovisi family, birthplace of patrons, cardinals and even two popes.

Its effigies defy the passage of time and the few visitors who come to this cold and ancient palace, with a glorious past but now dusty, with threadbare carpets, dampness, chips and illuminated by chandeliers without all their bulbs.

The surprise comes on the first floor, which is accessed by a narrow spiral staircase, in the vault of a small room until recently used as a closet and which is decorated with a painting whose authorship has been certified: Michelangelo Merisi Caravaggio. It is the only mural -not fresco- of the master, dated 1597, and represents the low angle view of a celestial sphere surrounded by Jupiter, Neptune and Pluto, the latter with his penis in sight.

An allegory whose meaning is very important, since it is known that a cardinal used this place as an alchemy laboratory, and hence the presence of the three gods, who represent air, water and fire, the capital elements of that mysterious science. “It is the only Caravaggio mural in the world“agrees the heiress.

The Roman palace that guards the only mural by Caravaggio. EFE

The villa, up for auction

The woman talks to Efe on the ground floor of the palace, sitting with her back to a table full of well-framed photographs and lots of books. “Are you vaccinated?“, he inquires as soon as he appears from the doorway of a dimly lit door.

Jenrette, with a history as an actress and journalist in her country, spent 18 years with whom in 2009 she became her husband, owner of the place. From him, he says, he inherited the palace and also the symbolic title of “princess” … which he does not disdain, as can be seen in his smile. “I lived eighteen years, almost two decades, with my loving husband and gave me the rights of use for life and a large percentage in case I had to sell it“, he assures, without entering into the heir struggle that he maintained with the children of the nobleman’s first marriage.

He currently resides on the top floor, while the rest of the place remains almost in disuse, and enlists the help of Veronica, an affable, big-eyed Ukrainian enchanted by anyone who drops by and offers conversation.

The Court of Rome has decided that the villa must be sold or put up for auction on January 18 so that the Ludovisi heirs, apparently unable to maintain the building, pay off a tax debt. “It was not my decision“, acknowledges the” princess. “The judge has determined the starting price of this place at 353 million euros (392 million dollars), although the expert raised it to 471 million (528 million dollars), while historians insist in that its value is imponderable.

Jenrette even assures that about fifteen years ago the Microsoft mogul, Bill Gates, offered about 200 million dollars (178 million euros), although her husband preferred not to sell.

Something that will now be inevitable by the will of a judge, marking with El Hierro of the decline to one of the most powerful families in the history of Rome, now devoid of its distinguished abode.

The historian of the University of La Sapienza, Alessandro Zuccari, was commissioned by the judge to appraise the building and after a year snooping through its wealth, he came to the conclusion that it was simply “incalculable,” he explains to Efe.

The mansion was known to have a painting attributed to Caravaggio and in 1979 a historian published it as “probable”. But since then all scholars have agreed to defend his authorship: “No doubts“, ditch. In any case the professor warns that the new owner will not be able to do what he likes and the State will force him to take care of his delicate works of art. Because for something it is one of the most unique palaces in the Eternal City.