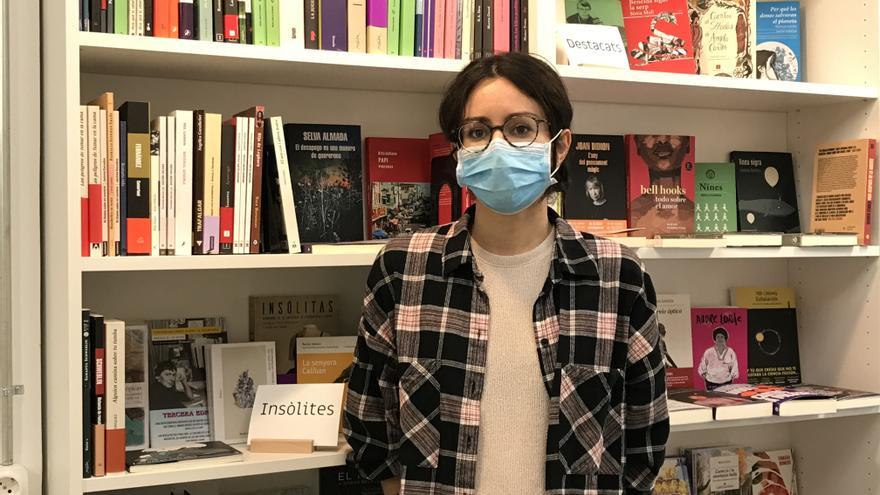 Investing money in a bookstore may seem like a bad idea from a financial point of view, but the numbers show that it is an upward trend, at least in the big cities. In the middle of 2021 already they had appeared five new in Madrid and four in Catalonia, which has now added one more to the list. Located in the Barcelona neighborhood of Poblenou, La Insòlita opened its doors on September 8 with a catalog that gives prominence to horror and science fiction literature written by women. It may sound extravagant, but the authors who work with fictional narratives to expose everyday problems are gaining more and more visibility –both new and classic– and in Spain there is no other bookstore like this one. Probably not in the world either.

Carlota Gelonch, 33, is the owner of this business and the person who serves customers. Putting the focus on the female horror and science fiction authors is due to their personal interest. She studied Art History and spent most of her life working on gender violence prevention. A few years ago she did a master’s degree in Comparative Literature where she began to discover these authors who impressed her with how they use science fiction to address social issues or terror to describe the real fear that women experience in their day-to-day lives simply fact of being.

“I think now is a good time for the genre because many authors have a super-powerful discourse at the political level and they are becoming more and more visible,” she explains, while clarifying that “anthologies are being made and all these writers are also making visible the work of many others who perhaps did not enter the genre or the canon at the time because they were women “. In fact, the name of his bookstore is a nod to one of those anthologies that is titled Unusual. Narrators of the fantastic in Latin America and Spain (Foam Pages, 2019), edited by Teresa López-Pellisa and Ricard Ruiz Garzón. “It is very strong on the political level and it interests me because that intersection between the literary genre and the authorial genre seems super powerful to me.” Among the signatures it collects are those of Mariana Enríquez, Laura Fernández, Cristina Peri Rossi, Luisa Valenzuela or Elia Barceló, among others.

This would be your recommendation as a bookseller for someone who wants to get started on the subject. The other would be Extraordinàries (Males Herbes, 2020), made up of texts by Roser Cabré-Verdiell, Gemma Martí O’Toole, Muntsa Mimó or Inés MacPherson. The latter participated in a talk in the library on unusual narratives moderated by Meri Torras, a professor at the UAB, along with other authors such as Lucía Leandro, Macarena Cortés and the editor Ricard Ruiz Garzón. It was one of the inaugural acts of La Insòlita that were held on the weekend of September 18, coinciding with the neighborhood festivities. There was also a children’s workshop directed by Karon Klinge and the exhibition by illustrator Carmen Segovia entitled Supernatural. She is also the author of the bookstore logo.

“I met her through the podcast Night tide, by Desirée De Fez, where she talked about dark Disney. I started to follow her and I saw that she works a lot in the world of narrative illustration. In the end you make connections with people who are interested in the same thing, “says Gelonch. His idea is for La Insòlita to be a meeting place as well as a shop and he is already planning the course program, which can be consulted at the website that is under construction and through which it can also be purchased He is aware that “we will not be able to deal with Amazon”, but customers will be able to access its collection, which starts at 1,400 copies.

The conversation with Carlota Gelonch takes place on the afternoon of a Thursday prior to a holiday. The rhythm of the streets farther from the center feels more relaxed than usual, the citizens who can get rid of the pressure of the next day’s work. La Insòlita is not exactly on the outskirts, but it is not in the commercial hub of the neighborhood either. “When I was looking, I found cool places near Rambla de Poblenou, but they were much more expensive, there are people there at any time. Also due to the pandemic, the City Council has opened calls to occupy empty premises,” he says. The situation of 22 @ and the plan for more green space in the district convinced her to decide on the area.

At the moment it is still settling, but is happy with the flow of customers that the bookstore has. During the talk, a middle-aged woman walks into the store to quietly browse the books, and later a young man peeks out to ask if a package has arrived. “No, not yet, I suppose on Monday,” Gelonch replies with a smile and comments that “it’s from the Trampa publishing house, which is right next door.” They brought him a welcome gift and they weren’t the only ones: “The La Parra winery also came yesterday and gave us a cava. There are neighbors who stick their heads out and thank us for a new bookstore. The welcome in the neighborhood has been very cool “.

La Insòlita’s offer is a bit hybrid. In addition to the non-realistic narrative signed by women, it has a children’s section, a more generalist part and “a corner of magic, esotericism and a bit of folklore. Many of these authors that interest me are recovering this: folklore, legends, the anonymous tales or stories of the territory. It is something that is not current and this is a gesture to find out what is there, “says Gelonch.

Due to this diversity of genres, so is the clientele. “Very different people came to the inauguration, which is something I like. There are people who come looking for specific witchcraft things, for example, and then neighbors from the neighborhood who ask me Swiftsby Aramburu. Boys and girls also come, there are many around here. “The site takes on its own personality as it progresses. The owner had some reference bookstores in the city:” Taifa for the generalist part, which I loved. And then Prole or La Raposa for the feminist part and then Gigamesh for the part sci-fi. That is like the totem but I don’t think I look alike at all. We will have some books in common but nothing more, “he says.

I had the idea of ​​opening a bookstore for a long time, but as a romantic rather than realistic plan. A project that was always relegated by the daily hustle and bustle that, with the stoppage brought by the pandemic, it could suddenly develop. But a bookstore is still a business, although many times idealized, and to start it it is necessary to have a financial plan, learn how the sector works and convince the bank to grant a loan that allows all this to be carried out.

“I have had the time to study everything I could at Barcelona Activa [la agencia de desarrollo económico local de Barcelona]. I have been amazed with the ease of training and flexibility with training microcapsules of two or three hours and an amazing technical follow-up, “says Gelonch, leaning against the counter of her newly opened store. In addition, during that period she investigated what the union was like in the one who was going to enter. He was also surprised: “I was able to speak with other booksellers and booksellers who sat down with me, they gave me contacts of distributors, they explained to me how the software. There is a support network among the booksellers, I was very well received outside the neighborhood and also here, which are the La Petita, l’Etcètera, or Nollegiu bookstores. At no point have I felt any tension or competition. “

His idea now is “to see with the publishers what is coming out. And, through the activities we do, greatly enhance what interests. For example, we are talking with a publisher here that works mainly with Catalan authors to make presentations or book clubs to give them visibility. “