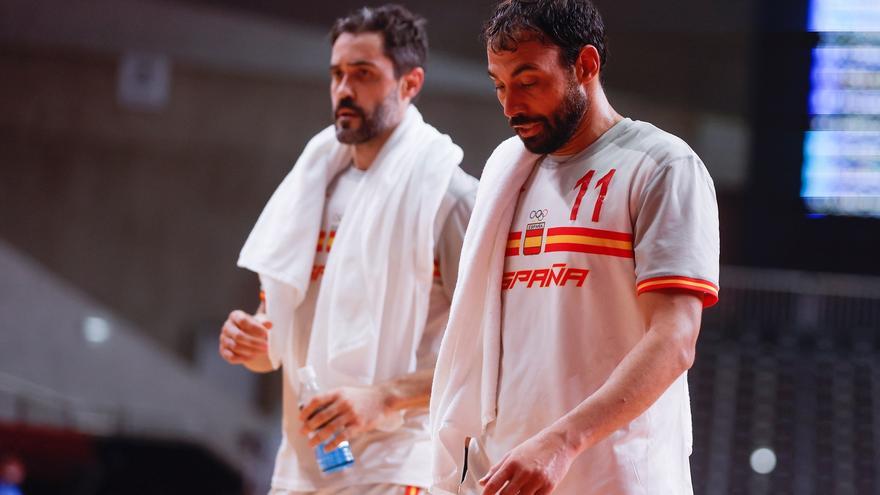 The Gran Canaria Dani Sarmiento curdled a game with ups and downs, two goals to his credit, bright in the first half, but weighed down in the second, brought about by a Henrik Tof Hansen’s elbow to his face, a center-back who leaves his mark in all the clashes and who was the keynote for the Danes in the semifinal. Strokes and picaresque, allowed in excess by the referee couple.

He started the game through a leathery defense on both sides. The feeling of playing an Olympic semi-final was more than palpable. Not an inch of gift. Sweat, muscle and genius to conquer the five rings in the 40×20 of the Japanese capital.

Sarmiento made his first appearance in minute 8 and a half. The one from Las Torres rose above the Nordic wall and launched a direct missile at Niklas Landin’s right squad. A surprise to all the undaunted Danes, one of the differential elements of Jordi Ribera’s team. It was not included in the offensive plans that Dani was an executor, but any variant that could disrupt the plans of the Olympic champion would be worth to reach the fight for gold.

At the halfway point of the first part of the game, the goalkeepers of both teams were shining with their own light. Gonzalo Pérez de Vargas and Landin, two of the banners of their national teams, were walling up their clubs to keep a short score 5-7 for the Scandinavians, led by Thor Mikkel Hansen on both sides of the track and piercing the Hispanic mesh three times.

The orange alarm went off with five minutes to go, when Denmark was comfortable with the wall built in front of Landin’s goal. The defensive efficiency of the Nordics allowed them to force a comfortable advantage of four goals 7-11 and the nerves took hold of the Spaniards. In the absence of Dani Dujshebaev, Antonio García appeared to try to find the rival cracks.

At halftime, despite the fact that Spain found the way to goal, the owner of the Olympic gold did not shrink and continued on the path of goal. If in the last play before reaching the break Dani assisted Adrián Figueras with a foreshortening of genius to put the 10-13 with two seconds left, Hansen was not going to be less and received the ball from Landin and threw a hammer to take advantage that Spain was playing without a goalkeeper. Four behind at halftime and Ribera had to adjust concepts in his magic laboratory.

As soon as he returned from the break, Sarmiento was able to add another goal to his amount but the ball went to the wood. Fortune was not accompanying the team during the clash, missing numerous solo counterattacks and inevitably causing the Danes to maintain the advantage in the score.

Al de Las Torres could have impotence and he was charged an expulsion after a loss a couple of plays after his shot to the wood, with one less Spain pulled his courage and with one less player he did not lose sight of the marked in the 13th minute and cut the difference to 17-19.

Started to boil Álex Dujshebaev to start believing in the comeback and get back into the game, just like Spain did against Sweden in the quarter-final match. Of course, if you bite Mikkel Hansen you suffer its consequences and Thor He was not going to stop adding goals to his pocket, nine at the equator of the second half (19-21).

Meanwhile, Sarmiento had gone to the bench knocked out by an elbow from Hanse, the Danish central defender. Champions are also champions for leaving these types of errands that sap the morale of their rivals.

The divinity of Perez de Vargas to keep their own alive. The keeper maintained 35% of games with ten minutes to go to leave the amount at 20-22, even with Denmark putting all the meat on the grill, gambling with seven players on the court.

Dani scored his second goal of the game when the tie had become more tangled. In the 28 and a half of the second half, when Spain had not managed to equal the score in the final stretch, despite trying heroically with the 23-25 ​​and that he would not move any more until the final 23-27.

This is the LaLiga classification after matchday 7

UEFA withdraws legal actions against Real Madrid, Barcelona and Juventus for the Superliga