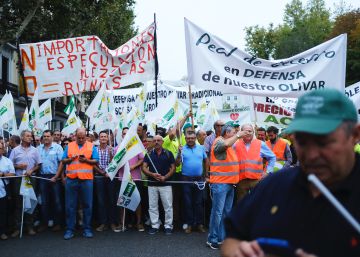 The olive sector, represented by Asaja, COAG, UPA and Cooperatives Agroalimentarias, will manifest this Thursday in Madrid to denounce the "critical" situation that more than 250,000 families of producers are going through for the losses they bear due to the low prices of olive oil and before the proposal of the president of the United States, Donald Trump, to impose tariffs of 25% on agricultural products, among them olive oil.

Thus, thousands of olive growers, from Andalusia, Extremadura, Castilla-La Mancha, Aragon, Valencian Community, Murcia, La Rioja and Catalonia, will travel the streets of the capital under the slogan 'Fair prices for a live olive grove' to claim a package of measures that reactivate low prices at origin and guarantee a "decent" future for traditional olive groves.

Specifically, the demonstration will begin at the Puerta de Alcalá and will run along Alfonso XII Street to flow into the headquarters of the Ministry of Agriculture, Fisheries and Food, in Atocha.

Although Spain is the leading producer of olive oil worldwide, it has the lowest origin prices in the European Union, even reaching below production costs (the weighted average cost of oil production Olive oil in Spain, according to the International Olive Council, was already established in 2015 at 2.75 euros per kilo of oil on average).

The campaign began in 2018 with a 26% price drop, at an average of 3.53 euros per kilo, according to data from the Observatory of Prices and Markets of the Ministry of Agriculture of Andalusia, and the downward trend has continued during 2019 , to stand at 44% less (from 3.53 euros per kilo in June 2018 at prices below the current two euros per kilo, below production costs, 2.75 euros per kilo), at a international context of lower production, mainly in non-EU countries.

"Therefore, this price situation is not due to market reasons, since it is a sector in which demand grows above supply, but to speculative maneuvers that seek to gain share by sinking prices at source," The sectoral leaders of the agricultural organizations have stressed.

On the other hand, the lack of material and human resources prevents carrying out the necessary traceability controls, which guarantee quality and purity, prevent fraudulent practices related to oil mixtures and certify that the labeling offers complete information and rigorous

Added to all this, according to the sector, the unfair commercial practices of the distribution chains that use olive oil as a claim product, "throwing away the image of a product of excellence and contributing to the downward trend of prices".

"This situation threatens the viability of traditional olive farms and puts at risk the way of life of more than 250,000 families and hundreds of municipalities that live directly and indirectly from this crop," they have denounced.

The cultivation area dedicated to olive groves in Spain rises to 2.6 million hectares, distributed in more than 400,000 farms. This crop maintains 15,000 jobs in the industry and generates more than 50 million wages per campaign.