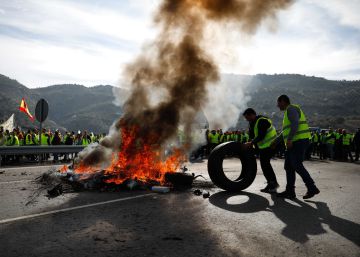 “Without olive groves, Jaén dies”, cheered thousands of farmers on Thursday who blocked all access to the province of Jienense, from north to south and from east to west. In an unprecedented mobilization, the territory that leads the world production of olive oil wanted to shout enough to the serious crisis of prices in origin that the sector suffers for at least two years and that, he says, threatens the profitability and future of its farms. The revolt of the olive growers is part of the calendar of protests scheduled throughout the country by agricultural organizations. Also on Thursday there were tractors in other provinces of Castilla y León. All, with the same common denominator: demand fair prices for the farmer.

The olive growers cut the four main highways of the province throughout the morning of this Thursday causing kilometer retention. The moments of greatest tension were lived in the A-4 of Andalusia, in Andújar and, especially, in La Carolina, at the entrance of Despeñaperros, where the only road cut that was not authorized by the Government Sub-delegation was produced. However, there were no major incidents beyond the burning of tires. The protest, supported by hundreds of tractors and agricultural vehicles, was complemented by that of more than 300 cooperatives in the province and part of the commerce and institutions of the municipalities, which closed their doors in solidarity with the sector in a province dominated by monoculture of the olive grove.

It was no accident that the mobilization of the olive growers took place in Jaén. In this province, the price crisis It is sharpened much more by the predominance of the traditional olive grove, less mechanized and with more production costs: “They pay us the kilo of olive at 40 cents, less money than we received 20 years ago,” complained Francisco Jiménez, an olive grower from Martos which, at 64, claims not to have experienced a crisis of this dimension.

“Patience is over, we must say enough. The politicians have forgotten about the farmers, but the countryside cannot be ignored, ”proclaimed Luis Carlos Valero, of the Asaja Jaén association, during the cutting of the A-4 highway in Andújar. Cristóbal Cano, from UPA, focused on the claims: “We do not ask for anything impossible. We are not fighting for anything romantic, just to be able to continue working and live with dignity in this activity, for its present and its future ”.

Olive growers request the creation of an interministerial table to agree on fair prices, the review of the private storage system (which allows oil to be withdrawn from the market to cause price increases), market self-regulation and end the sale at a loss of olive oil, a widespread practice in the linear ones of the great surfaces.

Asaja, COAG and UPA convened last week up to 21 concentrations in 11 autonomous communities to claim fair prices for farmers and ranchers.

Mobilizations The concentrations are held in Santiago de Compostela, Zaragoza, Vitoria, Don Benito (Badajoz), Burgos, Almería or Jaén among other locations. They started last Monday, January 28 and are scheduled to end on February 19.

In addition, the sector asks that Competition open an ex officio investigation before the possible pricing for the large distribution. “The added value is left by industry and distribution along the way,” said Miguel López, of COAG, who urged the government to “put order.”

In the protests there was little self-criticism of a structural crisis that, as many experts argue, It is marked by the imbalance of power in the value chain, with an atomization of the producing sector (in Jaén there are more than 400 oil mills that continue to sell mostly bulk oil) compared to a distribution dominated by four or five large groups, “It is not a problem of lack of balance of supply and demand, it is a problem of fraud and until it is resolved, we will not stop, ”warned Miguel López, general secretary of COAG Andalucía.

Olive oil is not among the products where there is a greater differential between prices at origin and in supermarkets. According to the Index Prices in Origin and Destination of COAG foods, the kilo of extra virgin olive oil (the highest quality) was paid in December to the producer at 2.09 euros, while at destination it was 3, 82 euros That is to say, a differential of 83% that, being high, is far from 700% or 570% that occurs in the potato or orange, respectively.

But in Jaén the olive grove moves all the productive machinery of the province. “The fight against rural emptying and for the defense of more than 100,000 families living in this sector in Jaén begins here,” predicted Manuel Alfonso Torres, president of Infaoliva and businessmen of Jaén.

A farmer protest last Wednesday in Don Benito (Badajoz) ended with police charges. This Thursday the olive growers cut the A-4 at the height of La Carolina. These protests are only the reflection of the crisis in the agricultural sector, which has called up to 21 concentrations in the coming weeks in 11 autonomous communities. The main agricultural organizations, COAG, UPA and Asaja, have led the mobilizations. Following the protests there is a 9% fall in agricultural income over the past year, but above all the fear that the next CAP, the European policy that manages subsidies to the agricultural sector, will reduce aid to the sector in the next community budget .

Agricultural associations argue that “aid from Europe and even those destined by the central government and the autonomous communities have been suffering cuts for years”, as highlighted in UPA. Meanwhile, production costs rise for farmers and ranchers, who do not have the capacity to transfer these increases to the price of their products due to pressure from distributors.

“The lack of fair prices, the serious crisis of profitability of farms, the climate challenge and the imposition of trade barriers are pushing farmers and ranchers across Spain to the limit,” said Asaja, another major organization in the sector.

International trade disputes have intensified for a couple of years. The Spanish agricultural sector has suffered US tariffs on table olives, oil and wine among other products. These rates make products more expensive for exports and end up causing a fall in prices at origin. In addition, there are other undercover trade barriers such as phytosanitary requirements imposed by other countries to shield their markets and the entry into the EU of huge volumes of low-priced products from third countries and subject to more lax controls. Some also remember that the rise in the minimum interprofessional minimum wage (SMI) also raises the costs of the sector.

“Almost all farmers and ranchers are immersed in a serious profitability crisis. This imbalance of the agri-food chain is pushing thousands of families that are dedicated to food production throughout Spain to the limit ”, they defend from COAG, the other major organization in the sector.

The Spanish agricultural sector is not the only one that mobilizes. In the last two months Dutch farmers collapsed access to Amsterdam with a tractorate, something similar happened in Brussels, Paris and Berlin, which also experienced protests in the sector to claim better conditions.