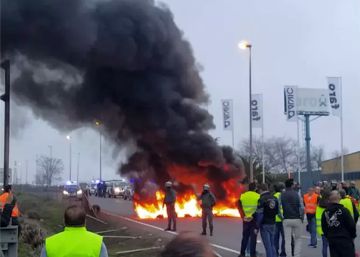 The olive growers of Jaén, the province that produces the most olive oil in all of Spain, has cut this morning the main roads of the province to protest the low oil prices and claim a fair price. Hundreds of farmers, concentrated early in the morning, intend to cut the four main highways that cross the territory for two hours, until one in the afternoon. This is the first protest action of a mobilization calendar designed to call on the Government and administrations for help due to the low prices of olive oil at source, a crisis that has been enduring since the last two years.

The protests, which will run throughout the day, have been especially intense in La Carolina, where farmers, who have advanced a few minutes at the scheduled time, have burned a roadblock on the A-4, the main connection of Andalusia with the rest of Spain, causing significant retentions. This action was not authorized by the agrarian organizations or by the Government Subdelegation. The protests will continue until one with traffic cuts announced on the A-4, kilometer 327 in Andújar; the A-44, kilometer 77, in Puerto Carretero; the A-32, kilometer 39, in Úbeda, and on the A-316, at kilometer 66 of Torredelcampo.

Precisely this step, which connects Jaén with Córdoba, has also been plugged ahead of schedule. Although there is a large presence of Civil Guard agents, no charge has yet occurred. Dozens of tractors also travel the tracks.

The olive sector of Jaén, the world’s leading producer of olive oil, has taken to the road to demand strong measures from the Government. They demand that he fight against the big distributors whom they accuse of favoring a dominant position in the market that makes olive oil prices unfeasible. At present, the production costs are above what olive growers receive at source. A situation that they consider unsustainable.

In addition to the road cuts, for today there is a strike for all olive companies in the province, more than 300, which is supported by all political groups and institutions in Jienenses.

Agricultural organizations have called for the “orderly” participation of the sector in protests over the “grave situation” in which the olive grove is in the province of Jiennense. Asaja, COAG, UPA, Cooperatives Agro-alimentary and Infaoliva have asked for unity in the mobilizations and road cuts because, “if the olive grove loses, we lose everything in the province of Jaén”.

They expect it to be a mass protest. For now, in recent weeks, shops, town halls, regulatory councils of the three appellations of origin of olive oil from Jienne and even the National Association of Orujo Oil Companies (ANEO) have shown their support for the mobilization of this Thursday. Also all cooperatives belonging to Agro-alimentary will join the mobilizations and stop their activity this Thursday, as will the ANEO pomace extractors and the regulatory councils of the three designations of origin. In addition, municipalities such as Quesada, Peal de Becerro, Albanchez de Mágina or Chiclana de Segura will close their facilities to the public coinciding with the two hours of cuts on the roads of the province. In other Spanish provinces they have also shown their solidarity and two tractorates have been organized in Zamora and Salamanca.

The mobilizations come after months with the origin prices well below costs of production. The measures requested are an inter-ministerial table to agree on “fair” prices, the complete review of the private storage system, the elimination of tariffs with the United States, the self-regulation of the market and the end of the “sale at a loss” of the oil of olive.

Job creation rebounds in July and membership grows by 161,000 people

Employment in July achieves its highest rise since 2005, but there are still 747,656 fewer members than a year ago