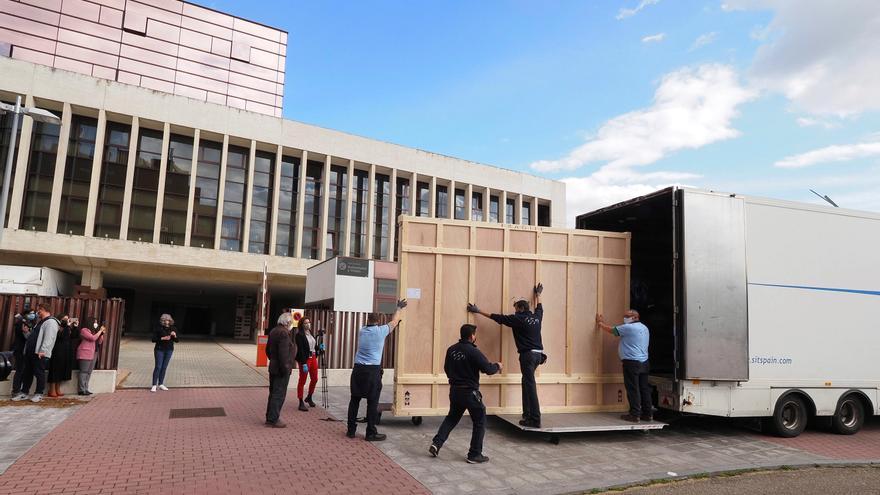 Valladolid, Apr 14 (EFE) .- A three-century hiatus elapsed between the execution of the Communards in 1521 and the elevation of their captains Padilla, Bravo and Maldonado to the category of heroes of liberties thanks, mainly, to the oil that Antonio Gisbert painted in 1860 and he has arrived this afternoon in the city of Valladolid.

In the midst of exceptional security measures, escorted by two camouflaged patrols of the National Police and another identified, several workers have lowered themselves from the truck where the painting “Execution of the Communards (1860)”, the work of Antonio Gisbert ( 1834-1901) and property of the Prado Museum deposited in the Palacio de las Cortes, from where it has been removed.

The fabric will be one of the essential pieces of the commemorative exhibition of the V Centenary of the Commune Movement (1521-2021), promoted by the Parliament of Castilla y León and that will open in this headquarters on April 22, the day before the defeat of Villalar of which it will soon be half a millennium.

It is the first time that the painting leaves the Carrera de San Jerónimo palace, where it was installed after being bought for 80,000 reales due to the efforts of the liberal Salustiano Olózoga (1805-1973), who years before, in 1843 although for a short time He was successively Minister of State and President of the Council of Ministers.

With the background of the church and the village of Villalar (Valladolid), the oil depicts the moment when Juan de Padilla, with his arms crossed, ignores the crucifix that a Franciscan friar offers him before being beheaded after a very summary trial held on same day of execution.

Of large dimensions, 255 by 365 centimeters, the canvas also captures the moment when one of the executioners unties his hands from the inert body of Juan Bravo, whose head shows another of the executors in front of an altar to a crowd that is sensed but not it looks.

In the lower right, the third captain, Francisco Maldonado, climbs the scaffold helped by another friar who gives him spiritual aid, also haughty, and like his companions represented in rich clothes.

Gisbert, who painted it at age 26, thus inaugurated a theme of historicist painting that he himself continued in “The execution of Torrijos” (1888), with the same theme centered on the fight, defense and cost of freedoms.

“The Execution of the Communards”, part of which will illustrate an ONCE coupon in the April 24 draw, has already been the subject of controversy and debate between liberals and conservatives, alternating in the governments of Spain since the last third of the century XIX, since it did not obtain the Medal of Honor, the main prize in the Exhibition of Fine Arts of 1860.

He had to settle for a First Class Medal, which was criticized by those who thought that the conservative jury did not want to distinguish what was considered a harsh allegation against the absolutist monarchy from a historical episode that took place three centuries earlier. .

The canvas will be part of the exhibition “Comuneros. 500 years”, which will open on April 22 at the Parliament of Castilla y León, and which will also include, among other pieces, the document of excommunication to the Comuneros, dated January 31, 1521 and signed by Cardinal Adriano of Utrecht, regent during the absence of Carlos I, when in 1519 he moved to Germany to be crowned emperor after the death of his grandfather, Maximilian of Austria.

It is the first act of the commemorative program of the V Centenary of the Community Movement, whose honorary presidency will be played by King Felipe VI.

It will continue from May 19 to 21, on the same stage, with the celebration of an international congress and the participation of leading historians from national and international universities, institutes and centers.