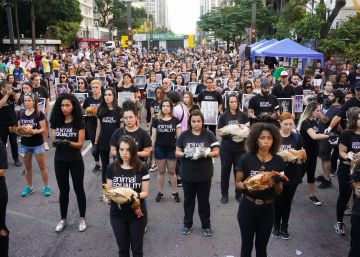 For any philosopher without knowledge of law, it is difficult to pronounce on the judgment of the Norwich judge who yesterday considered that veganism is “a philosophical belief” and ruled that it deserves to enjoy the protection of the Law of Equality, approved in 2010 in United Kingdom to prevent religions and beliefs from being subjected to any form of discrimination. “We can reach the absurdity that any form of life is claimed as a right; But it is dangerous terrain. The offense of veganism is not as serious as race, sexuality or religion, ”says Germán Cano, professor of Contemporary Philosophy at the University of Alcalá de Henares.

In his opinion, the problem is that in advanced “first world” societies, the mistake is made that followers of different lifestyles tend to take a privilege. Cano places the root of this distortion in the secularization of society and the progressive loss of weight of religion. “There is the circumstance that one thinks that their lifestyle, regardless of what it is, should be equated with the weight that religions have had, and that is why they seek the fit of their ideology in the field of law.” In the absence of the court ruling on whether the dismissal of Jordi Casamitjana, a British citizen of Catalan origin who sued his company for firing him as a result of his “declared vegan convictions,” was or may not, Cano believes that his argument that being discriminated against for being vegan is a “extemporaneous justification” that is meaningless.

Jorge Rlechman, Professor of Philosophy at the Autonomous University of Madrid, recalls that legal systems incorporate philosophical beliefs, a reality that can lead some citizens to be equivocal about their moral requirements. “The 1948 human rights declaration, for example, has many philosophical principles behind, but it is difficult to adapt the different beliefs in a legal framework.”

For Javier Morales, author of the book The day I stopped eating animals, more than a philosophical belief, veganism is a political movement. “If we talk about the regulatory framework, what would make sense is that the rulers worry about offering options to vegans in public services such as dining rooms in hospitals or schools.” In his opinion, this current cannot be considered a religion, but a revolution with a force similar to that of feminism. “We fight to make animals visible and to eradicate the deplorable practices to which we submit them; Human beings are not the center of the universe. ”