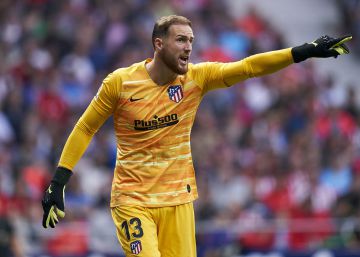 The end of last season already showed the change of command in the Atletico's locker room. Diego Godín's confrontation with the club for a renovation that did not take place led Koke, Oblak, Saúl and Giménez to step forward, the four captains already de facto in this course. The Uruguayan central limited its range of action to what happened on the field of play.

Among the thorny issues he had to handle in the booth was Diego Costa. His expulsion at the Camp Nou In the game in which the team was playing, getting into the fight for the title irritated the club and part of the squad. The high economic fine that the red and white directive imposed on Costa, over half a million euros, resulted in the player's refusal to train. The situation has been redirected, with Simeone As the main defender, Oblak also played a fundamental role in the reintegration into the Spanish-Brazilian group.

With its renewal already sealed, the 26-year-old Slovenian goal organized a meal at his home attended by Costa, Savic and his compatriot, the basketball player Luca Doncic. The approach to the Balkan group was interpreted as the gunshot to the new role of Oblak, which only the symbolism of Koke has prevented him from being the first captain. In the first preseason game he confirmed his hierarchy. In the absence of Koke, the goalkeeper wore the bracelet in front of Saul.

“Jan (Oblak) has been very observant during the five years he has been here and now he has run the ladder after the marches of Gabi, Godín, Juanfran and Griezmann. He has a lot of personality and has always had weight, but now he is very boss. He speaks little, but when he does he has weight and they listen to him ”, they concede in the club.

The renewal of Oblak was considered as one of the legs that should support the forced renewed project of Atletico. With the extension of his contract until 2023 at the rate of 10 million euros per season about to close, according to knowledgeable sources of the negotiations, Oblak became restless before the looming approach and pressured the club to fine-tune and aim high in the reinforcements. “More than pressing, he was very interested in how the template was going to be made. He always said that the important thing was to have a team to compete and that the rest did not matter, ”says a red and white manager.

Started the course, Oblak kept his goal to zero in the first two league games against Getafe (1-0) and Leganés (0-1). The unusual sequence of fitting two goals in three consecutive games - Eibar (3-2), Real Sociedad (2-0) and Juventus (2-2) - greatly disturbed him. In those three meetings, a goalkeeper was appreciated who did not seem to trust the parapets before him. “He is not a freaking goalie or who makes big fights to point to his teammates when a goal fits, but he misbehaves when that happens. It is normal that he was restless in the match with Eibar because they scored two goals in 20 minutes, ”they warn from the club.

The tie with Celta in the Metropolitan (0-0) and the victory in Mallorca have normalized their numbers. The four goals he has received in the first six league days match his records from the previous two seasons. In those two appointments without fitting the players of Simeone have also contributed to reduce to eight the number of auctions that Oblak receives per game, the best brand since he landed at Atlético in the summer of 2014. The duel this Saturday threatens those statistics for a goalkeeper who aspires to achieve his fifth consecutive Zamora Trophy, something that no goalkeeper has achieved.