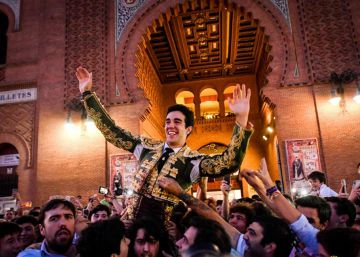 In bullfighting, as in life, luck is fundamental. And when it comes, you have to take advantage of it. That was done by Tomás Rufo, a young bullfighter born in Talavera de la Reina (Toledo), who, after a splurge of freshness, fulfilled the dream of any bullfighter: go out on his shoulders through the big door of Madrid.

It was his day. Definitely. The afternoon, perfect; the public, delivered; and the lot, almost the dream. Everything was on his side and he did not let it escape. After caressing the triumph in the contest of nocturnal bullfights held this summer, the Toledo finally cut the two ears that opened the doors of glory.

Steers of Ymbro fountain, well presented (except for the very tertiary 2nd) and of unequal play, although most meek and noble. The 2nd and, above all, the 5th stood out for their quality.

Rafi, which was presented: bajonazo crossed losing the crutch (silence); half down in luck to receive (silence).

Tomás Rufo: defective lunge (ear); lunge (ear with request of the second and two turns to the ring).

Las Ventas bullring. Friday, September 27. 1st of the Autumn Fair. Around half a square (16,361 spectators, according to the company).

One strolled from the second, which took a good bottom in the last third, and another from the notable fifth, of great nobility, class and route. A blacksmith who, like the rest of his brothers, tamed in rods, but then rammed promptly and joyfully on the crutch.

After giving his death to the mayor of the square, the popular Florito, Rufo began the task in the third, vertical figure, closed the compass. Then, and after a couple of rounds in a round of different bills, the racking -and the square- broke with a superb natural finish executed with the leg flexed. Lengthy. Very slow That crutch and a few other ornaments, pregnant with taste and bullfighting, were the best.

Also a batch of temperate and well-finished natives, or the magnificent epilogue with which he closed his first work: Half a dozen doubloons that laid the laying. In between, alternated in time and space, other more accelerated and linear moments that were not up to par.

Attitude and value, much value, Fernando Plaza also demonstrated. But to him, unlike his partner, luck was elusive. Before a lot of few options, he could only get on the site and remain very still. As before the discarded and bland third said little, it was played without tales against the sixth, who moved without delivery and with his face through the clouds.

Quite less fortunate was the performance of El Rafi, which was presented in Las Ventas. Although he was solvent and left over ex officio, he placed himself in an advantageous way and killed his two opponents of two lows.