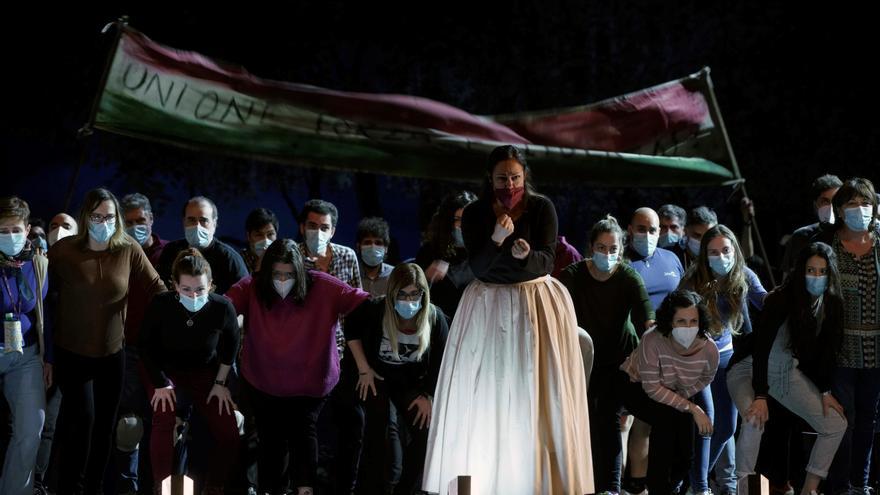 Madrid, Feb 28. (EFE) .- For the first time since its reopening, the Royal Theater has tackled this Sunday with its own production the romantic drama of “Norma”, by Vincenzo Bellini, the top work of the belcanto, that of the “Casta Diva” that Callas immortalized or La Caballé, and he has done it with a young audience as a jury for his first revalidation.

In an exclusive and free preview for people under 35 years of age, nearly a thousand attendees have long applauded this commission made to the Australian stage director Justin Way, with the Principal Choir and Orchestra of the Teatro Real under the orders of the Italian Marco Armiliate.

With a double cast, to breathe and face the high demands of the bel canto style, Yolanda Auyanet took the stage tonight in the title role, in addition to the tenor Michael Spyres (Pollione), the mezzo-soprano Clémentine Margaine (Adalgisa), the bass Roberto Tagliavini (Oroveso), the soprano Berna Perles (Clotilde) and the tenor Fabián Lara (Flavio).

With Norma being one of the most difficult roles in the repertoire for soprano, which demands a great capacity for emotional transmission and at the same time a perfect control of the melodic phrasing with hardly any instrumental cushion, the eyes and ears were placed especially on Auyanet.

In this examination, the Spanish soprano has received intense applause, for example after the litmus test of the prayer to the moon “Casta Diva” in the first act, one of the best known and most popular arias of the lyrical repertoire and emblematic piece in the career of Maria Callas, but also in other passages, as in each exercise of sisterhood with Margaine / Adalgisa, also highly valued.

By chance, the first pass before the public took place after last night’s demonstrations in Barcelona for the freedom of rapper Pablo Hasel, which somehow has put even more focus on the insurgent tensions that were in the script. original of Felice Romani through the conflict between Gauls and Romans.

Way has further underlined this aspect by returning the action to the time when the opera was released, specifically to a decadent theater in Italy in 1831 where, after the liberation of Napoleon and again under Austrian rule, precisely “Norma” is rehearsed. .

This meta-theatrical device has made it possible to characterize the Romans as Austrian soldiers who come to supervise the show and make the Italians’ desire for freedom resound under their noses, which Bellini cunningly put into the mouth of the choir, dressed as a Gallic people.

At the same time, it has streamlined the continuous changes of space (incorporating them into the plot), it has given rise to various sound planes between the stage and the backstage and has favored with this visual play of the theater within the theater beautiful almost pictorial prints when on the tables have gathered more than 40 people (conveniently shrouded with a mask).

Finally, it has aggravated the dissonance of the central character due to a public dimension that cannot fit in with the private one, by adding the role of the diva of the function to the multifaceted and contradictory original painting, in which she is a loving mother, a spiteful partner, a friend, mentor and, above all, priestess on whom depends the war between her subject people and the occupying civilization, to which her ex-lover and father of her children belong.

This Wednesday, March 3, the official premiere will take place. In the absence of a thousand tickets, it has already sold almost all the available capacity for its 12 functions, which will last until March 19, alternating with “Siegfried”, by Richard Wagner.