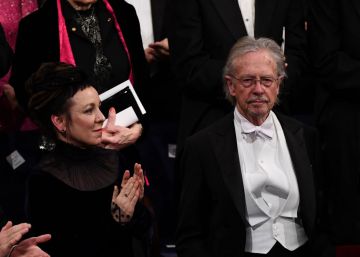 The Nobel medal represents a young man, sitting under a laurel, who listens and transcribes, embelesado, the song of the Muse. The inscription, in Latin, reads: "It is beneficial to have improved life through the discovered arts." Well, there are those who believe that Peter Handke, laureate with that of Literature 2019, life on Earth has not improved, according to at least 500 people who, in a gesture almost unprecedented in the history of the Nobel Protesters, protested yesterday in Stockholm during the delivery ceremony and the subsequent Gala banquet for the delivery of an award to those who consider maintained a proserbia and revisionist posture during the former Yugoslavian War.

“Apologize for the victims of Srebenica today"; “Not a Nobel at fake news”Read two of the banners, the first of notable dimensions of bright yellow and with the face of the writer, who carried just half a dozen people almost an hour before the start of the delivery gala at the Konserthuset, the concert hall that since 1926 welcomes it. They were as few as the quartet that waved two Polish flags, one of which was crowned with a photograph of Olga Tokarczuk, the 15th woman awarded the Nobel Prize for Literature 2018, recognized in this edition for the suspension of the call in 2017 after the sexual scandal that broke out within the Swedish Academy.

Difficult that neither Handke nor the other winners saw them because the square was cordoned off by the police from the early hours of the morning, when the winners were already entering through a side door, such as the Japanese Akira Yoshino, Nobel Prize in Chemistry for the batteries lithium, which was almost six hours before an act that was promptly liquidated. In just an hour and a quarter, the 14 winners were parading, speed favored because categories such as Physics were concentrated in three people (James Peebles, Michael Mayor and Didier Queloz), of which only one intervened.

In the presence of the Swedish royal family headed by King Carlos Gustavo XVI (almost as hieratic as the bust of Alfred Nobel, focal point of the stage), the introductory words of the president of the Nobel Foundation drew attention, Carl-Henrick Heldin, which spoke of "the proliferation of political leaders who deny the facts" and the "growth of irrational thinking, of extreme opinions" that "gain ground for rational thinking and always necessary consensus." And he finished it off with an indirect reference to Greta Thunberg (a best-seller in Sweden), by ensuring that "when young people stand up, they deserve our support." Of the delivery, also notable the intensity of the applause to Tokarczuk, less intense when it was the turn of his colleague Handke.

Just five blocks from those words, about 750 meters away, in the Norrmalmstorg square, about half a thousand were already gathered at the demonstration to protest the Nobel's concession to Handke. With Bosnian flags, others with white bracelets such as those that Bosnian Serbs forced non-Serbs to wear in 1992) and many with posters (one of them, with a cartoon of the writer as a doorman in front of a network that was a barbed wire) with prisoners behind, playing with his novel The goalkeeper's fear of the penaltyi) heard, among others, two surviving mothers from Srebenica or Ernada Osmic, a Bosnian refugee who arrived in Sweden in 1995. They lamented the writer's empathy with Milosevic and deplored the decision of the Swedish Academy.

Attendees protested at least five degrees below zero because even the weather, in the end, tried to keep the status quo and yesterday in the end the snow sprinkled the city. In line with tradition and in clear thermal contrast, the traditional banquet was held in the Blue Hall of the City Hall (Stadhuset), with 1,300 guests of rigorous etiquette and a menu that sought to combine ecological will with seasonal food and making the most of food for Don't waste them. On the table of honor, however, the Swedish protocol spun thin: Tokarczuk was to the left of the monarch and Handke, on the contrary, finished ten chairs beyond and on the side of the Queen's table. And placed next to a member neutral: The wife of a Swiss diplomat.

“When giving me the prize I felt as much peace as energy; but it became difficult for all these attacks, ”said Handke, in exceptional statements for his willingness to postpone interviews, at least to Western media, to the RTRS serbo station. As exceptional as the 2019 Nobels.

Las Palmas de Gran Canaria, among the 25 coolest film festivals in the world