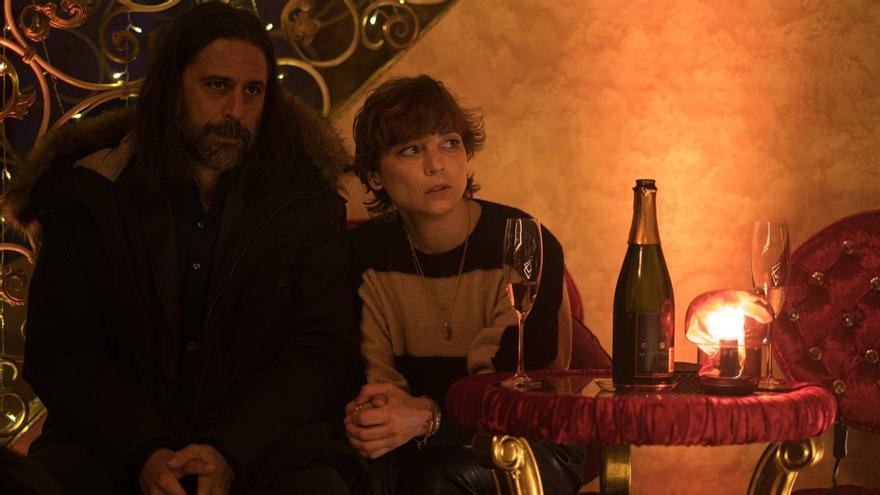 Edurne (Eleanor Watling) and Julian (Hugo Silva), the snobbish ex-partner of the series Movistar+ 'Nasdrovia', which in the first season changed the legal profession to management of a Russian restaurant and ended up trapped by the mafia, come back with one new season, darker and crazy at the same time, in which the protagonists appear as part of the criminal organization as legal advisers. This new situation, which each one lives in a very different way, will be the one that will focus the plots of the new six chapters of 30 minutes duration that the platform will broadcast in its entirety on demand this friday, 25.

Although the first season (which has just been awarded two MiM awards) was characterized by practically all the action taking place in the claustrophobic restaurant that gives its name to the series, it travels through various european cities, from Helsinki to Moscow, passing through Madrid. Although the filming took place in Bulgaria (where they went in search of snow and found the sunniest days and the least snow of the year) and Spain. However, the feeling of confinement is even greater, since the protagonists are subject to the whims of Boris (Anton Yakovlev), the unpredictable capo, and must pass the lockdown dictated by him covid in his company and that of the rest of the band. "The series has breathed a lot, it has a lot of exterior, but in the end our protagonists are equally locked up. In the first season it was the restaurant, now it is the situation that suffocates them," explains Hugo Silva.

Also, this time the weight does not fall entirely on Edurne (especially), Julián and Franky (Luis Bermejo), but more importance is given to the plots of the secondarylike that of young Yuri (Kevin Brand), the inexperienced mobster who will prove to have feelings (and whose burned face required five hours of makeup) or the surprising Sergey (Michael John Treanor), who can kill if need be, but can't stand a toxic work environment. “That's one of my favorite scenes. And the one that sets the tone for the series”, comments Leonor Watling amused. Fiction is plagued once again (it is already part of its hallmark) by cultural references and winks to which you have to be very careful. Like the one they do to Treanor with an allusion to 'Outlander', a series in which the actor took part. "How can they have so much with such beautiful shots, with such elegant 'travelings' and characters with so many layers in episodes of only half an hour", the actress admires.

The gangster squad is completed Vasili (Yan Tual) and Rodia (Arben Bajraktara), and three members of an agency of assassins are incorporated, who are brought to life by international actors Eliza Rycembel ('Corpus Christi'), Panos Mouzourakis ('Mamma mia') and Radoje Cupic ('Genius: Einstein'). Another of the new characters is an eccentric taxi driver with a double life, who embodies Julian Villagran ('Arde Madrid', 'La peste', 'El Ministerio del Tiempo'), while James Blanch ('The Ministry of Time') plays himself within a plot of metafiction.

That mixture of drama and black humor that characterizes 'Nasdrovia' is accentuated in this season of Movistar+'s fiction, produced in collaboration with Globomedia (The Mediapro Studio), as it goes from the anguished desperation of a trapped Edurne to delirium 'drag' of the capowho enjoys cross-dressing and who, in one of his megalomanias, manages to set up a set in the living room of his house (which is the real home of some Russians) where a film will be shot.

The director of the film, by the way, is brought to life by Marc Vigil himself ('El Ministerio del Tiempo', 'Malaka', 'Vis a vis', 'Living without permission'), who has joined this season of the series to direct it, in addition to acting as executive producer and screenwriter, along with Serge Sarria ('Chapter 0', 'Malaka', 'Perestroika'), Luismi Perez ( 'The intermediate', 'Malaka', 'Chapter 0') and Miguel Esteban ('The neighbor', 'The end of comedy', 'Chapter 0'). Vigil was very picky about his 'cameo' and made himself repeat the scene many times. “It's an 'autocameo'. It is very him. Because he is like that," says Silva.