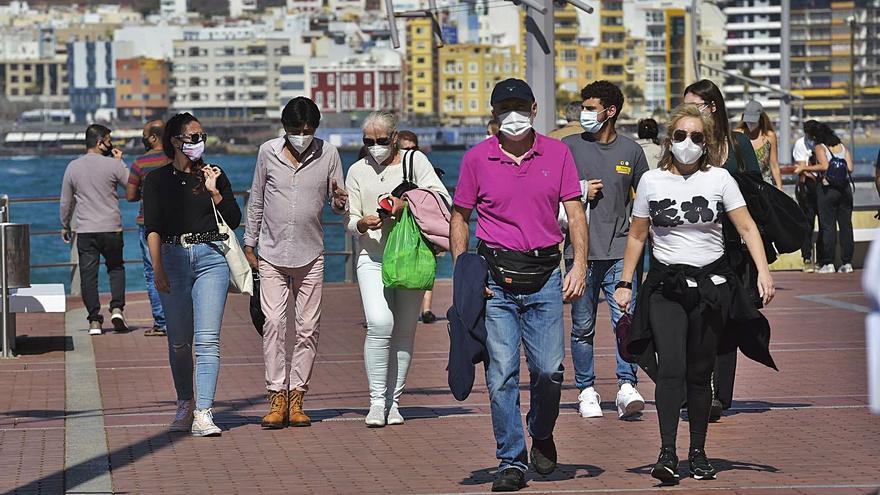 The vaccination campaign is currently focused on completing the vaccination in first doses of people between 40 and 49 years old, starting the campaign for the age group between 30 and 39 years, inoculating second doses in essential personnel, those over 50 to 65 years and complete the vaccination schedule in those over 66.

In this sense, the latter are already vaccinated 75.5% with two doses, which represents 217,063 people. Between 60 and 65 years, 75% have been vaccinated with one dose and 16% with two. It should be remembered that in this group the inoculation times of the second doses are longer because AstraZeneca has been inoculated in them. 77.4% of people between 50 and 59 years old have already received one dose, while 49.7% of that age group already have both doses. Regarding people aged 40 and 49 years, in these weeks progress has been made in their vaccination so that 87,527 people, 27.18% of this age group have received a dose and 7.27% are fully immunized. This week, in addition, it has begun to vaccinate one of the youngest groups so far, of those between 30 and 39 years old, among which 5.4% are already vaccinated.

Gran Canaria is preparing for the opening of nightlife today. The Governing Council agreed on the 10th, among other measures, to authorize the islands at epidemiological alert level 1, to open bars, pubs and nightclubs until two in the morning, as long as they meet certain capacity and occupancy requirements. , as well as to register attendees. A measure that, however, is insufficient for the sector, which estimates that at the moment only one in five establishments will be able to open.

“I sincerely believe that very few will be able to open, it is a great step and there will be some places that take risks, but there are many who will not be able to do so because neither the schedule nor the forms are compensated,” said Antonio Márquez, vice president of the Association of Bars, Cafes, Restaurants and Nightlife of Las Palmas.

“Taking into account that more than half of the nightlife is in the tourist area, they will not be able to open because there is no tourism, and then only large venues will be able to open. I think it barely reaches 20% because many are not going to compensate at the moment. However we are happy because it is a step forward, and to see if next week we will take others, “added Márquez.

In this sense, the sector claims that the technical table that has been created for this purpose continues its work “and they continue to take us into account” to accelerate the de-escalation of nightlife “and to be able to return to normality as soon as possible”. Happy with the progress of vaccination in the Canary Islands, Márquez considers that expectations are good, although, for the moment, insufficient for the sector. “You finally hear about nightlife after ten months, so today’s is the first of, hopefully, many steps. But for now, there is not going to be a massive opening of nightlife, just a small one ».

Remember that nightlife establishments, such as discotheques, cocktail bars with and without live performances and karaoke, on islands at alert level 1 – currently Gran Canaria, Fuerteventura, La Palma, La Gomera and El Hierro – must comply with the limitations capacity (50%) and maximum occupancy established and adequate ventilation, both indoors and outdoors, apart from keeping customer records to guarantee traceability in the event of the possible detection of a case during the following 30 days.

The maximum occupancy per table will be ten people outdoors and four indoors. The consumption of food and beverages will be carried out at the table, with the clients seated, a safety distance of two meters and the correct use of the mask, except at the time of the ingestion of food or beverages. Dancing is not allowed, so the dance floor must be sealed or, where appropriate, be occupied by tables without exceeding the allowed capacity. Likewise, in the interior spaces forced ventilation will be used, in order to obtain an adequate renewal of the air.

The spokesman for the Government of the Canary Islands, Julio Pérez, said yesterday that a report prepared by the Ministry of Health to find the causes of the persistence of the incidence of the virus in Tenerife indicates that the youth and the dispersion of the population could be behind the figures that he has described on different occasions as “worrying”. However, he does not consider that the opening of the nightlife, where most of the attendees are young, should be rethought. “We do not consider it to be an additional danger,” said the spokesman, who, however, admitted that the relaxation of measures always “causes some concern” among members of the Government, as to whether it will be “excessive.” “It has not been so far,” insisted the counselor, who recalled that most of the islands are in a trend of continued decline in cases. For example, Gran Canaria added 28 cases yesterday, thus recovering its decreasing trend. Specifically, this week has added a total of 193 cases, which is 8% less than the previous one.

Pérez dedicated a large part of his appearance after the Governing Council to the situation in Tenerife. Apparently, zero patients are escaping the control of tracking on the island, despite having the same number of trackers as Gran Canaria. The difference between the two is not too important, since the tracking capacity in Tenerife is 71.7% and in Gran Canaria 75%, however, the Public Health Directorate believes that this situation may be contributing, along with the specificities geographical and demographic aforementioned, to the until now inexplicable increase in coronavirus cases in Tenerife. The Government of the Canary Islands has decided not to impose new restriction rules on Tanerife, although it has promised to carry out a more detailed geographical territorial analysis, improve tracking information as well as reinforce surveillance, inspection and sanction. On the other hand, he has asked the population for a greater commitment to comply with current regulations.

Tenerife maintains itself with the highest incidence of the virus. At the moment, it has a cumulative incidence at 7 days that triples that of Gran Canaria. This is attributed to the cases in Tenerife are concentrated in younger ages, with a higher percentage of men (who tend to be less demanding of health systems) and present a more dispersed territorial distribution in environments that in turn tend to use these health resources less

One more week without changes in the alert levels by islands: Tenerife, Lanzarote and La Graciosa, at level 2, and the rest at level 1.

A woman dies from covid-19 in the Canary Islands and 159 new infections are registered. Most diagnoses are reported on the island of Tenerife. Read more

The covid incidence improves in the national territory and worsens in the Canary Islands. Read more

The Canary Islands registered 81 outbreaks of coronavirus in the last week. Most of the infections are in the social sphere. Read more

Covid-19 infections rise in the Canary Islands, with 169 new cases. The last 24 hours there have been no deaths from the coronavirus. Read more

The Canary Islands have already administered almost one and a half million doses of the vaccine against covid-19. Read more

Health opens vaccination to the entire population over 12 years of age. Read more

Canarias reduces by 35 the number of patients admitted with covid in two weeks. Read more

One death and 131 cases of covid-19 in the Canary Islands. The deceased is a 49-year-old man who was hospitalized in Tenerife. Read more

28 percent of the target population of the Canary Islands is already immunized. Read more

The Canarian classrooms will maintain the use of masks next year. Read more

The Canary Islands have 46 days to immunize more than half of the target population. Read more

The Ministry of Health of the Government of the Canary Islands launches two new mass vaccination points against COVID-19 in Gran Canaria with the capacity to inoculate 2,100 more people per day. One of them, loaned by the City Council of Las Palmas de Gran Canaria, is in the La Presa Sports Complex, in Pedro Hidalgo, and the other in the Juan Carlos I Hospital, managed by the Nursing teams of the Insular Maternal and Child University hospitals and Dr. Negrín, in coordination with those of the Primary Care Management and who join the other 44 vaccination points currently existing on the Island.

Half of the canaries already have at least one dose of the vaccine. Read more