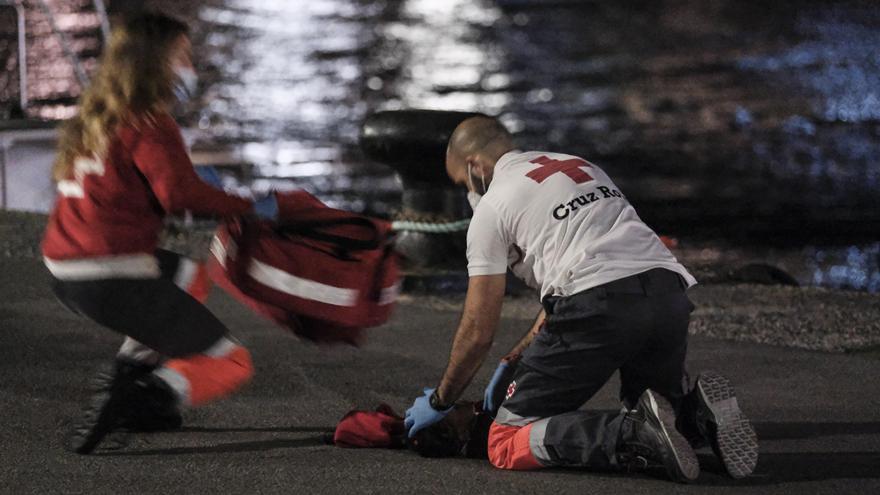 Paula He left his job in a Madrid hospital months ago to join the Red Cross team in Gran Canaria; MiguelAs a nurse like her, she dedicates the hours that her job at 112 leaves her free to help the NGO. Their lives crossed on Tuesday night for the heart of a Malian girl to beat again on the concrete of the Arguineguín pier.

Miguel and Paula are the protagonists of the photographs of the EFE Agency that this morning have overwhelmed thousands of Spaniards: those of two members of the Red Cross desperately resuscitating a girl at night disembarking from a Maritime Rescue ship in cardiorespiratory arrest, with severe hypothermia.

And they are also the visible face of thousands of Red Cross volunteers who this Wednesday feel more proud than ever of the emblem that they wear on their vests, especially those of the Canary Islands, where the NGO has been the target of all kinds of attacks and criticism. in recent months, including a boycott of his famous sweepstakes.

Everything, for the service they rendered in caring for the more than 23,000 immigrants who arrived in the archipelago last year, which was branded by the extremists as directly collaborating with the mafias that profit from the traffic of boats, for their work in the front line on the docks; and at the same time qualified by the most exalted of the opposite side of cooperation with the European policies that keep immigrants blocked in the Canary Islands, for their management of the camps.

“For months we have been the target of criticism, false accusations, harassment and threats,” complained its president in the Canary Islands, Antonio Rico, on February 6 in an open letter, in which he stressed that the Red Cross continued to do its usual job, ” safeguard the security, dignity and well-being “of people, guided by the fundamental principle that governs their actions, humanity.

That they continue doing what they always do, Paula and Miguel know well, veterans already in the team that usually mobilizes every time Salvamento Marítimo warns that it has picked up immigrants in the Atlantic and returns with them to the Arguineguín dock, where both have experienced several dramatic situations in the last two months, such as a canoe with five dead or a boat with a mother broken with grief because her child had died hours before at sea.

Last night’s patera had been considered complicated already hours before, at least since the Salvamar Macondo arrived at its position 15 kilometers from the island and its crew thought there were deaths on board. In fact, this was initially transmitted by radio to the assistants on the ground, such was the impact of the deterioration they observed on the faces of the 52 occupants of the nacelle.

Paula and Miguel were the first to arrive at the dock, in their car. The Salvamar was docking and the rest of the team had not yet deployed, there was still no hospital, no ambulances.

There was not even time to think much, because a Salvamor Macondo crew member hurriedly jumped to the ground with an apparently inert body in his arms and ran towards them. The sailor handed it to her impressed, without much hope, thinking that there was little to do now, because the little girl did not react.

It was his turn. Miguel and Paula did not waste more than two seconds, the necessary to turn to the two reporters who were portraying the scene to ask them to call 112 and request that the arrival of medicalized ambulances be accelerated as much as possible, because it was not going to be one more assistance.

“Until you see yourself in a situation like this, you don’t really feel what it is. They had that girl’s life in their hands. They revived her, it went well thanks to both of them,” one of his teammates confessed to Efe. who prefers to remain anonymous.

Paula and Miguel know that the girl is in the intensive medicine unit of the Maternal and Child Hospital of Las Palmas de Gran Canaria, where she is still in serious condition, but seems to have stabilized. She is accompanied by her mother, who assures that she is five years old, although in the images she seems smaller.

There they take care of eight more children between one and thirteen years old from the same boat, all of them helped last night at the dock by health workers from the Canary Islands Health Service and the Red Cross.

“In hot, with full heart, you work as it is, you do not stop; but, when you get home, sometimes you break down,” says the same member of the team. And that was what happened to almost everyone in Arguineguín last night, especially Paula, who had to be asked to stop, rest and calm down, because it was visible that the resuscitation of the girl had made a dent in her.

But today the Red Cross is proud of its people, the national head of its Emergency Units, Íñigo Vila, corroborates Efe. “In cases like this, you feel happy that everything has gone well, without forgetting what the reality is either,” he says.

And the reality, Vila points out, is that everyone in the Red Cross, especially in the Canary Islands, is aware that “people will continue to throw themselves into the sea desperate, so this will not be the last boat, there will be more and, surely, there will be more complicated, like this one. ”

While making these reflections, a Maritime Rescue plane reports that it has located another dinghy 140 kilometers south of Gran Canaria, with sub-Saharan immigrants on board. The rescue ship will still take three hours to reach them.