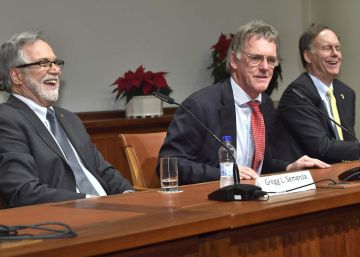 That night, William Kaelin He dreamed that he was awakened by a phone call at 5:55 in the morning, and in his dream he understood that it was too late to receive the message from Sweden. Then he woke up: it wasn't 5:55, but 2:30. The Nobel's call could still come! He forced himself to sleep. A telephone rang at dawn and Kaelin, stunned, did not know if the call was happening again in another dream or if the sound had really awakened him. It was a number with too many digits, "it couldn't be a local call." Kaelin replied and suffered a shock so strong that he doesn't remember any word of the conversation with the Swedish professor, just "a feeling of deep gratitude."

There is no life without oxygen. A dangerous element that corrodes iron, intoxicates by excess and kills by default, must be consumed with precision. Because of this, multicellular organisms have developed sophisticated mechanisms to adapt to an environment with variable oxygen availability. This year Semenza, Ratcliffe and Kaelin have received the Nobel Prize in Medicine by the discovery of molecular circuits that act as sensors of oxygen levels in cells. His research could have practical repercussions in the treatment of anemias, myocardial infarction and cancer.

William Kaelin is not a little lamb, he is not even a good wolf. When he criticizes, he goes to the jugular. “Scientists dream of the Swedish award; those who deny it, lie, ”he said during the press conference where his prize was announced. "Those who do bad science are dominant negatives," they have heard him say. Negative dominants are proteins that not only do not have their own function, but inactivate others. "I was chief of residents at Johns Hopkins and my mission was to terrorize residents with knowledge about rare diseases," he half jokingly explained. His attitude contrasts with that of Jim Allison, 2018 Nobel Prize in Medicine, wise kind and charismatic, deep in the laboratory and able to sing with Willie Nelson.

Kaelin has the Sidney Farber chair at Harvard Medical School and the Dana Farber Cancer Institute. He is also a professor at the Howard Hughes Medical Institute. You can't climb higher. What will the university professor who said Kaelin "had the future outside the laboratory" think? Not all teachers are like the one of Albert Camus whom he thanked when he received the Nobel Prize for Literature.

Kaelin suffered a shock so strong that he doesn't remember any word of the conversation with the Swedish professor, just "a feeling of deep gratitude"

I met Kaelin through SPORE in brain tumors, a scholarship that only a handful of institutions enjoy. Kaelin was co-investigator, without the role of leader, in Harvard SPORE. Most of the fellows are neurosurgeons or neurologists, why did Kaelin, a basic scientist, participate in a project focused on seeking the cure of malignant tumors of the brain? He had his reasons. His wife, Caroline, a prestigious surgeon specializing in breast cancer, famous for her compassion – she was often seen taking the hand of a patient while talking to her – had suffered a brain tumor against which no one could do anything. Kaelin asked that donations be made at his funeral instead of flowers to eradicate brain tumors.

A very close marriage, they had fantasized about the Nobel together, had discussed how they would feel if Kaelin received him, what they would do when that happened. When Caroline passed away, the Nobel ceased to interest him: “I thought it was almost better not to be given it to me; It was going to be a bitter experience to receive it without her. ” So Kaelin began his emotional night.

In his article in the magazine Science In 2001, Kaelin published that a protein called VHL (Von Hippel Lindau) behaved like an oxygen sensor by destroying another protein that was activated with hypoxia and had been discovered by Semenza. Kaelin says he was interested in Von Hippel Lindau syndrome, a hereditary disease characterized by the formation of highly vascularized tumors, during his period as head of residents. It was one of those rare diseases …

Gabriel Celaya warned that we demand oxygen thirteen times per minute. Blood vessels and red blood cells are responsible for carrying oxygen from the lung to the tissues. The lack of red blood cells, with the result of low oxygen distribution, is called anemia. Blocking blood vessels, by thrombi or emboli, causes ischemia or lack of oxygen in the tissues. In addition, tumors must generate vessels to oxygenate cancer cells and allow them to grow. Without blood vessels or oxygen, there would be no tumors.

The practical applications of Kaelin's discoveries involve the generation of drugs that simulate a lack of oxygen in patients with anemia. This false hypoxia causes a massive production of red blood cells, improving the symptoms of patients with anemia. Drugs that improve oxygen utilization could be used to treat situations of ischemia, such as angina pectoris or stroke. Another application of these new drugs would be the inhibition of blood vessels in tumors, suffocating their cells. These drugs are being tested in clinical studies in patients with anemia and kidney cancer in the western world.

At his wife's funeral, instead of flowers, Kaelin wanted donations to be made to eradicate brain tumors

Semenza, Ratcliffe and Kaelin will receive the prestigious award on December 10. I don't think that that day Semenza or Rafklin would think that the history of science cannot be told through the biography of the Nobel Prizes. Omissions, misogyny and mistakes have been too frequent and relativize the historical strength of the Nobel. Only two Spaniards have received the Nobel Prize in Medicine, Santiago Ramón y Cajal and Severo Ochoa, and the latter was awarded by mistake. Let us not forget that Fibiger won the Nobel Prize in Medicine for identifying the germ that caused cancer, but his Spiroptera carcinoma did not cause cancer, nor did it exist. For this error, Sweden penalized without prizes to cancer research in the following years. In fact, the first Nobel Prize in Medicine for cancer therapy was given to Allison and Honjo last year, 118 after the first Nobel. Science is a collective enterprise: rewarding a maximum of three scientists per year seems insufficient, when not absurd or irrelevant.

The majestic and emotional ceremony in which scientists can feel members of the aristocracy for a day will not affect William Kaelin. Above any pomp and circumstance, he will be thinking about Caroline.