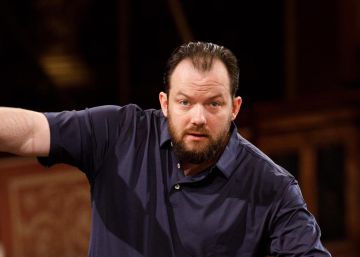 Beethoven he was the “guilty one” of creating the Vienna Philharmonic. He said it Daniel Froschauer, last Friday, December 27, at the beginning of the traditional press conference presenting the New Year’s concert. The event took place at the Imperial Hotel in Vienna and was broadcast live through the Austrian Presse Agentur website. The president of the Vienna Philharmonic, which is also one of his first violins, recalled the heritage of the Bonn composer’s orchestra, at the start of the commemorative feasts of its 250th anniversary: “At the premiere of the Ninth Symphony at least two musicians participated, a trompista and a bassoon, who years later were founding members of our orchestra ”.

Beethoven’s music will be one of the novelties at the 2020 New Year’s Concert, which reaches its 80th edition. Six of the Twelve Contradances, published in 1802, one of which (No. 7) includes a theme of the final movement of the Heroic Symphony. In the past, Mozart, Schubert, Haydn or Verdi and Wagner received similar tributes. But Johann Strauss Jr. will once again be the star of the show, with five of the sixteen compositions, not counting tips. None of them will be new, although there will be one with Beethovenian wink, the waltz Embrace yourselves, millions of beings!, based on a verse from the famous ode To the joyby Schiller, who used Beethoven in his Ninth Symphony, although the waltz is dedicated to Brahms.

The other novelties of this edition point to his two brothers, Josef and Eduard. Of the first, in commemoration of the 150th anniversary of his death, four compositions are included; three of them never before programmed, like the exquisite waltz Greetings from love. And two more of the little Strauss. Of the rest, the music of Hans Christian Lumbye (the Danish Strauss) will sound again and the concert will open with the varied overture of the opera The homelessby Karl Michael Ziehrer. But Froschauer highlighted in the press conference the Gavotte by Josef Hellmesberger Jr., who was the principal conductor of this orchestra in Mahler’s time: “For me it is a really great composer who manages to portray Viennese character with a few notes.”

The traditional date of January 1 will include two other commemorations. One is the 150th anniversary of the construction of the Musikverein, the famous building of the Society of Friends of Music in Vienna. Inside, the orchestra has its headquarters, the famous Golden Hall, where this concert has always been held. The other commemoration is the centenary of the Salzburg Festival, the summer residence of the orchestra, but also the place where Clemens Krauss created this monographic concert format of waltzes, polcas and marches of the Strauss family, in 1929. But nothing can displace the Beethovenian anniversary. Froschauer has commissioned two specialists to study the Bonn composer’s relationship with the origin of the orchestra. It aims to explain how the technical difficulties of the Beethoven symphonies forced the creation of the first professional concert orchestra in Vienna in 1842 with the best musicians of the Imperial Opera.

The Vienna Philharmonic will play in 2020 several cycles of Beethoven’s symphonies in Paris, Hamburg, Munich and Vienna. Direct to Andris Nelsons what just recorded it with them for Deutsche Grammophon. But he will also be leading his first New Year’s Concert. “I feel like dancing a waltz,” he confessed fascinated during the press conference. This 41-year-old Latvian master debuted with the Vienna Philharmonic in October 2010. But, in less than a decade, he has conquered his heart, while establishing himself as one of the leading directors of the moment. Today he combines the ownership of the Boston Symphony and the Leipzig Gewandhaus. A true wunderkind that combines an overflowing talent with a natural simplicity. Nelsons spoke of the honor and responsibility of the invitation, but also took away importance. “I think the orchestra knows this music much better than any conductor,” he acknowledged with a smile looking at Froschauer.

Alexander Wrabetz, CEO of the ORF, explained later the details of the 62nd broadcast of this media “concert of concerts”, what in Spain you can see live through La 1 with the comments of Martín Llade. Michael Beyer will return to the front of the realization. And, in the choreography of the two pre-recorded ballet scenes, the Spanish José Carlos Martínez, National Dance Prize in 1999 will debut. Embrace yourselves, millions of beings! it will be located in the Winter Palace of Prince Eugene, the same place where the government coalition for Austria is being negotiated between the Popular and the Greens. And Beethoven’s contradanzas will be seen in two former residences of the composer in the Austrian capital, in Pfarrplatz and Döbling. Beethoven’s relationship with Vienna will also be dedicated to the traditional documentary of the intermediate, which this year will be directed by Georg Riha.

Froschauer dedicated his last words to praise the work of the Department of Parks and Gardens of the City of Vienna that is dedicated to the decoration of the Golden Room. “They make the most beautiful possible, as we do in the orchestra, because this is not a job, but a mission.”

In press questions, Nelsons was hesitant to clarify which director of the New Year’s Concert had impressed him most in the past. He didn’t remember his mentor, the newly disappeared Mariss Jansons, but of Carlos Kleiber. “For me he was a supernatural genius,” he said. Froschauer clarified, then the new version that will be heard and patted this year of the Radetzky March, from Johann Strauss Sr. This work It is played as a tip at the New Year’s Concert, since 1946, in an arrangement of the composer and member of the Nazi party, Leopold Weninger. Nikolaus Harnoncourt opened the 2001 edition with the original version, what It has a simpler instrumentation. But the president of the orchestra, in agreement with Nelsons, has preferred to commission a new arrangement. “We just didn’t feel comfortable with this,” he concluded.

Actor Juan José Otegui, popular for his work with Trueba or Almodóvar, dies