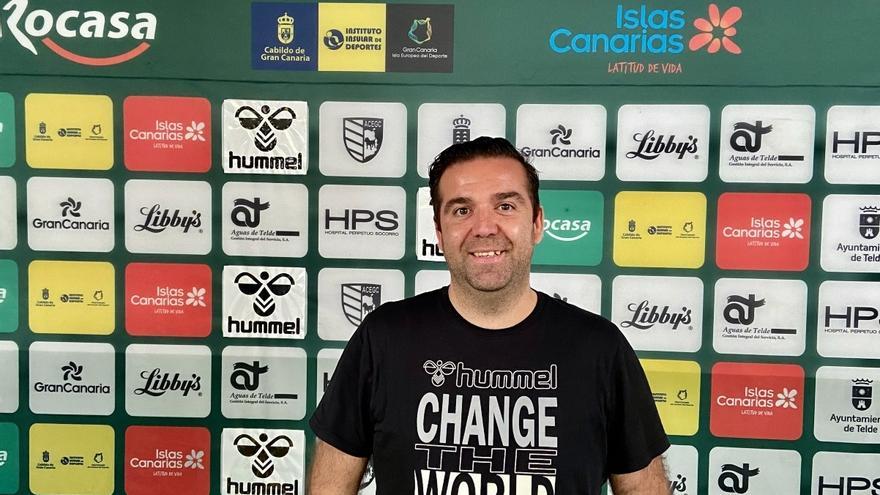 Robert Cuesta appears in society before his new hobby with a clear slogan, that of hard work as the only formula to achieve the team's objectives in what will be his first season commanding the Teldense ship, in a step forward in his professional career in the that the Catalan coach intends to fully return the commitment of Rocasa Gran Canaria for him and for the new cycle that will start this season 2021-2022.

The new coach of Rocasa Gran Canaria prescribes work and enthusiasm for the new cycle that starts in the Las Remudas entity for the next season in which he hopes to offer his new fans a hard-working, competitive team with an important presence of the quarry in the first team

The commitment to change and to the Rocasa Gran Canaria

"After so long in Granollers it has not been an easy decision. It is true that in a way I had the need to change my life and take a step forward in my sports career and at the moment when the opportunity to come to Rocasa Gran Canaria, the truth is that the club at all times showed great interest in my joining the project, they gave me a lot of facilities and here we are at the end ".

"The support of my family and my partner has been fundamental in making this decision and the truth is that I am very happy and looking forward to starting this new professional stage."

The importance of the quarry in your sports project

"The quarry is part not only of the club but also of the first team and in that sense we have to work to ensure that as many young people can get to play in the first team."

"We must encourage the players of the first team to be the mirror in which the little ones have to look at themselves and they must feel that becoming part of the first team is something they can achieve if there is a lot of work behind them."

"We must get the players to work to get to the first team. The important thing is always wanting and then everything else comes, but the first step must be that they want to get there."

A clear objective of daily demand

"The maxim that we must have next season is to want to be better every day than the day before. If we maintain this objective we will be a dangerous team that will compete every game. The moment we do not have that hunger for wanting to improve will be when there will be the danger that problems appear ".

The preseason you have in mind

"I consider a preseason with a lot of workload ahead, because preseason always comes loaded with a lot of training volume at the beginning to prepare the team to withstand future competitive loads."

"My work team for this season is already well defined. From the first moment the club has opened the doors for me and has given me all the facilities in the world. I have held a meeting with a large part of the coaching staff, although not all have I was able to come, but we did have the opportunity to have that first contact that I think has been very positive. "

"We all really want the ball to start rolling, being aware that we need to disconnect and take a vacation."

"The club has been working for a long time to strengthen the squad for next season and without a doubt the players who join the team come to add. Expert players and young people also come, with the idea of ​​joining in this new project of Rocasa Gran Canaria ".

"I ask my teams to fight, to be excited and eager, that we always have a smile from ear to ear when working, that we work hard but always wanting to work, because if that work is always accompanied by a smile it will be everything much better. "

The coach who has signed Rocasa Gran Canaria

"I do not know what to say about myself, what I can say is how I am coming, because I do it with a lot of desire to work and to join the new project of Rocasa Gran Canaria, to return all these facilities that are to me in the form of work. giving from the first minute they contacted me. "