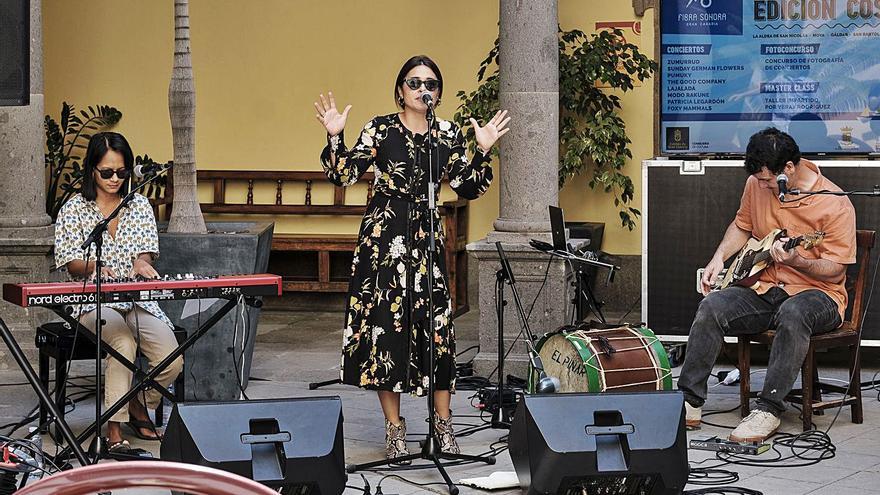 This edition, which has been called the Costa Edition because all the concerts will take place at night in venues on the island’s coastal strip, is organized by the Cabildo Gran Canaria, has a budget of 20,000 euros, and takes advantage of the good weather of the summer season,

The Minister of Culture, Guacimara Medina, advanced in the presentation that Fibra Sonora supports the talent of the most innovative musical creators of the island. “The idea, moreover,” he pointed out, “is to bring this musical offer to the most remote municipalities of the island, which this year four located on the coast have been chosen, but in the next edition it could be those located at the top” .

Medina made these remarks at a ceremony at the Casa de Colón in which she was accompanied by the musician and producer Jorge Brito – who coordinates the activities – and the head of the Music Department of the Council of Culture of the Cabildo, Fernando Suárez.

The concerts, which will be free of charge, begin on July 17 at the sports field located on the beach of La Aldea de San Nicolás, where Sunday German Flowers and Zumurrud perform at 8:30 p.m., in a space which will have a limit of 150 people. On August 14, in the neighborhood of El Pagador de Moya, it was the turn for Pumuky and The Good Company. The area of ​​Sardina del Norte, in Gáldar hosts, on September 18, the third appointment with the group Modo Rakune and the singer Lajalada, in an area that can accommodate 500 people. The tour concludes on October 2, in the esplanade of the House of Culture located in Castillo de Romeral, in the municipality of San Bartolomé de Tirajana, with the soloist Patricia Legardón and the band Foxy Mammals. Jorge Brito stressed that the event is complemented by a photography contest recording moments captured during the concerts, and a song composition workshop that will be given by the verier and professor Yeray Rodríguez. For his part, Fernando Suárez stressed that the Department of Culture of the four mentioned municipalities have collaborated closely in this activity, taking responsibility for the infrastructural details necessary for its development, “from the installation of the stage to the elaboration of the security plan, passing through the provision of chairs available to the public ”.

The concerts will respect the sanitary regulations still in force and will also be subject to the allowed public capacity, since the spaces will be limited to control their entry and access to each of the venues with locations that may be previously purchased 15 days before each performance free of charge, through the platform https://tureservaonline.es. The concerts of the first edition of Fibra Sonora were held online last year due to the restrictions imposed by the pandemic. The scope of views of the online edition was 4,180. At the end of the presentation, Patricia Legardón’s group –whose father is a guitarist and one of the founders of Los Sabandeños– performed various songs in the same courtyard of the Casa de Colón. Legardón performed alongside musician Takeo Takahashi (guitar) and Devitha (keyboard), and offered two pieces of modern jazz of his own entitled Of the wind and Storyteller.