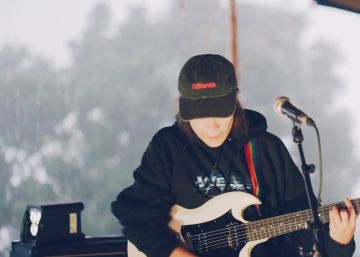 This edition of Bilbao BBK Live it has very little normal. The legendary Kobetamendi venue should be welcoming the tens of thousands of music fans who rush to make a place for themselves in front of the stage where their favorite artist plays. A scene that they used to repeat oblivious to the majestic views of the mountains that surround the festival.

But this year there is no one, to the point that when Elena Nieto (Salamanca, 27 years old) arrived at the place where the organization had summoned her, she asked the rest of her band (Yawners), still in the car: “Are you sure What is here? ” Due to the exceptional situation of the covid-19 pandemic, since the festival they have decided that since the 2020 edition could not be held -that it would have international artists such as Bad bunny, Kendrick Lamar, Pet Shop Boys or The Killers- wanted to offer die-hard fans an experience as close as possible through a cyber festival.

The call of the organization to participate in this exceptional edition in streaming He caught Elena on the Costa Brava, where he was surprised by the declaration of the state of alarm, and where the confinement has passed. “We were scattered, because the rest of the band, Teresa (drums) and Tomás (bassist) were in Madrid. It had been a long time since we rehearsed, but the organization gave us a rehearsal room in Bilbao and they left by car, I by plane and we saw each other there, ”she says. Yes, after months without seeing each other, they only had three hours of rehearsal to prepare for the performance, load the car and head straight to the venue, where a very different concert awaited them.

Affected or not by a pandemic situation, there is a maxim that is always repeated at festivals and that this year has not changed either: if something can go wrong, it will go wrong. And in the case of Kobetamendi, the rain can always make an appearance. He did it, in a big way, and forced the technicians and the band to change their location in a hurry to be able to move the event forward. Once established, with a tent protecting all the technical equipment, it was time for the sound check, but this time nothing to go a few hours before and enjoy lunch in the center of Bilbao. When it was verified that everything sounded good, a small drink to the bottle of water, another to the bottle of beer and to touch.

With his cap, inseparable complement of the artist, and a guitar strap with the colors of the rainbow – to celebrate Pride – the first chords began, accompanied by nerves and the strange sensations of playing for cameras and not for people. “It was super weird but very exciting, I felt that everything starts rolling again after the break. It was like playing at Radio 3 concerts, but without an audience. I really enjoyed it, but I don’t know if I would get used to the concerts being like this “, explains Nieto.

For Elena Nieto, the BBK was a different day at the office, but above all, a recognition by the festival at a time of great difficulty. Artists such as Dora, El Columpio Asesino, John Talabot, Amorante and Katza have also been on the stage of Kobetamendi. Although the script seemed like a science fiction novel, Nieto has enjoyed an experience that he hopes is unique: “Whenever I have been there it has been to the festival, so I had not noticed that there was a huge brewery. We were drinking something while they were reassembling everything, and it seemed like a Sunday in the field, ”he recalls.

You can see the full interview here.

Plcido Domingo: “I have not abused anyone. I will repeat it while I live” – ​​La Provincia

More than 3,000 people have visited the Casa de Colón since its reopening

Dance without age and without borders