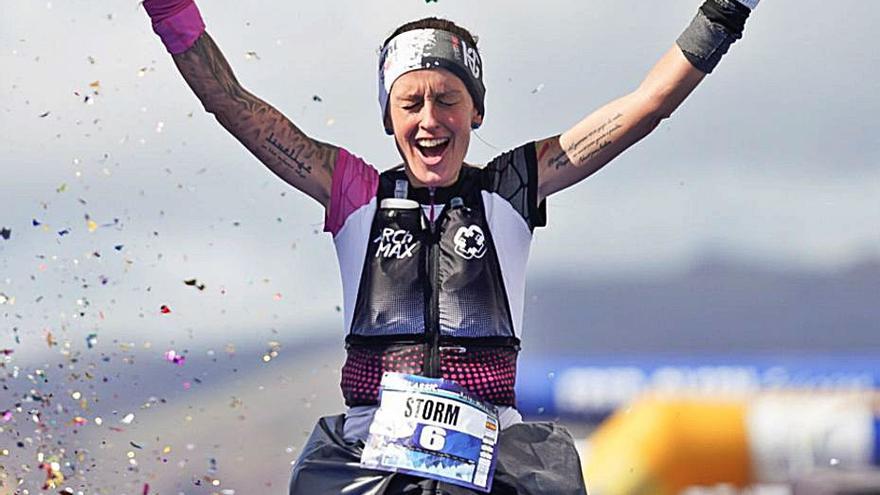 Two new names become part of the history of the Transgrancanaria. This time, in its most complex edition, but just as demanding and vibrant. The French Aurelien Dunand-Pallaz and the Cantabrian Azara García de los Salmones took the Classic modality, the queen test of the event, in an exciting test that has been marked by the prevailing weather on the island, with ostensible temperature changes and that has conditioned the becoming and the result of the test.

The French rider (13:42:42) conquers a tough Transgrancanaria Classic and succeeds the Capell-Villa duo in the race record Pere Aurell (14:03:35) and Fotis Zisimopoulos completed the podium. The podium of the Classic 2021 was completed by the Catalan Pere Aurell (14:03:35) and the Hellenic Fotis Zisimopoulos (14:19:05), second and third in the Expomeloneras goal in the south of the Island.

A Transgrancanaria Classic marked by the variant weather conditions in Gran Canaria, with an abrupt change in temperature between the island’s summit and the coast. The night cold affected many runners in their performance. Among them, Ragna Debats or Pablo Villa, who arrived to defend the champion title, but was forced to abandon before reaching Roque Nublo. Also to some of the Canarian tricks, such as the Galdense Alejandro Mayor.

Aurelien Dunand-Pallaz, who initially did not start among the main list of favorites, knew how to wait patiently for his moment and surpass Pere Aurell in the final stage of the race and reach the finish line alone. “I felt very good from the beginning. I love these weather conditions, the night, the cold, the wind, the rain … I was prepared. In fact, the end of the race was very difficult for me due to the change in temperature, ”said the French rider at the finish line.

Around 3.30 pm, Azara García de los Salmones crossed the finish line of the Transgrancanaria Classic in first position. The Cantabrian runner put the finishing touch to a spectacular race, which she led practically during its entire decisive phase until reaching Expomeloneras.

“It was a very tough race. For me in the end it was more of a psychological victory. Since the start of the race, on the first run, I have had cramps in both quadriceps. At first I thought of leaving and then provisioning to provisioning as far as I could … You see yourself first, take a turn around, my legs hurt that I couldn’t handle them, but seeing you with the possibility of winning made me continue. When I started, I took it for granted that I would not be able to cross the finish line, I called to say that I was going to retire, I could not run, ”said the Cantabrian runner.

The Slovenian Martina Potrc, passing through the Roque Nublo, covered in a dense fog that accompanied the runners yesterday. | | JORDI SARAGOSSA

The Catalan Claudia Tremps reached the finish line in second place, after signing another notable participation in the ‘queen’ test of the Gran Canaria event. Ines Marques, Portuguese, completed the women’s podium in the Classic modality.

For his part, in the Advance category, David Prades was the winner of the Transgrancanaria Advanced with a finish time of 5:47:12 hours. Rodrigo Monasor and Alberto Peláez signed the second and third places by just a second away, in favor of the first of both.

The Transgrancanaria once again offered changes in climate and landscapes. | | CARLOS DÍAZ-RECIO

Maryline Nakache, one of the favorites to prevail in women, responded to expectations and repeated her victory in 2020. The Slovenian Martin Potrc was second, followed by the Belgian based in Gran Canaria, Dominique van Mechgelen, third.

The staggered departure of runners, one by one, was going to play an interesting role in the strategy, because many runners would not be able to have real-time visual reference of their rivals. This is what happened in the Marathon category.

Ben Kimtai Cematot and the Finnish Marten Boström came first and second to the finish line but, in the final classification, they were overtaken by an Andreu Simón who had started later and had narrowed the gap compared to his predecessors. In the end, in the global stopwatch, Simón’s time was lower than that of his two rivals and, therefore, he revalidated his champion title.

In women, one of the favorites, Virginia Pérez, beat Kenyans Monica Cheruto and Sarah Jerop. The three members of the women’s podium signed a time that did not exceed a minute and a half, which speaks of the great competitiveness of this test and the level of its participants.

The Marathon was a scoring event for the Spartan Trail World Championship and part of the official RFEA calendar.

Although they are usually overshadowed by the longer distance events, the fastest races of the Transgrancanaria HG -Starter, Youth and Promo modalities- are always a very attractive incentive at the Gran Canaria event and have not disappointed at all on the morning of Yesterday.

Very tight finish for the Starter modality, where the first three runners crossed the finish line in a four-minute stretch. Victory for Damián Ramis (01:56:21) who beat the Polish Jacek Sobas by less than a minute (01:57:01). Also Spanish Carlos Carballo completes the podium, not too far behind the first two (01:58:48).

On the other hand, the Malaga runner Luis Nogueira de la Muela and the Valencian Júlia Font have been proclaimed winners of the Promo modality. The Andalusian was the fastest at the finish line, stopping the timer below the hour (00:59:50). Roger Comellas was second (01:01:11) and Alejandro Hernández, third (01:05:47).

In the women’s category, Júlia Font, stands out with the victory of this modality with a finish time of 01:07:39. In addition, Font does it as the seventh classified of the general. After her, another of the favorites: Sheila Avilés, with a time of 01:11:05. On the third step of the women’s podium, Marta Pérez Maroto (01:14:17).

The youngest also count. Javi Fernández (1:03:36) and Moana Kehres (1:09:06) were the winners of the Youth modality. Kehres, in addition to being crowned the champion in the female modality, crossed the finish line in third absolute position, only being surpassed by Fernández and Aarón Felipe, second classified male (1:07:57).

The Transgrancanaria WAA 360º already has the winner in the female category. French ultra-distance runner Claire Bannwarth reached the finish line in the early hours of Saturday, shortly after 1am, stopping the timer at the finish line in a provisional time of 63:42:49. After her, the Italian Marina Plavan and María del Carmen Pérez

In the men’s category, the third step of the podium will be shared: Eugeni Roselló and Luca Papi, two veterans of the event, crossed the southern goal of Gran Canaria together for which they will share honors in the race’s record.

Kroos: “My idea and that of the club is to retire at Real Madrid”