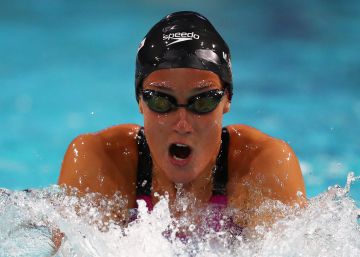 The powerful auto industry of South Korea has promoted the celebration of the World Swimming Championships in remote Gwangju, at the southern tip of the peninsula. There will be resolved during the next two weeks some of the unknowns that hover over the five major aquatic disciplines: jumps, water polo, synchronized swimming, races in open water and in a 50 meter pool. There are many enigmas hidden in online swimming for a year of the Tokyo Games. If on the international level the sport that attracts the investment of more geopolitical powers experiences an unfathomable void since the withdrawal of Michael Phelps in 2016, in Spain the mystery deepens after an Open that exhibited more miseries than promises.

The tests will be played until Sunday 28 at unusual times. Between the dawn and the midday Spanish, they will be able to be followed in Teledeporte and by Internet in FINA TV (www.finatv.live). The first week will concentrate the competition of open waters, jumps and synchronized, the water polo will occupy every day of the calendar and the tests of swimming in line will begin Sunday 21 in the dawn of Central Europe. Around 3.00 the championship will be opened with the preliminaries of the 200m feminine styles. There will be Mireia Belmonte, the flagship of the Spanish team that, at age 28, embarks on the final leg of a race that hopes to crown as flag bearer at the Tokyo stadium.

"We are going to face the toughest World Cup of Mireia's career," says Fred Vergnoux, the head coach of the Spanish team, "but we do not go with the tail between our legs. She is going to fight everything. If it enters a semifinal, great. It's a final swim, great. If he wins a medal, fantastic. We are going to have a very real picture of the situation one year after the Games. And I think this is the most important thing: to finish the World Cup knowing where we are going. The World Cup will be our guide to the Olympic preparation. "

A battery of physical problems persuaded Mireia to take a break in the second half of 2018. She needed it to clear her body and mind. Until the Rio Games, the swimmers in the history of this sport were counted who had stretched their careers beyond the 25 years completing programs of six endurance tests. None had won medals in that stretch. Mireia, like Katinka Hosszu or Federica Pellegrini, belongs to a generation of pioneers who in Korea face the penultimate step.

"It's going to be a very complicated week," warns Vergnoux, to explain the tremendous calendar that awaits him. "On Sunday the 21st morning we swim the 200 styles – a short test that helps you light the spark to catch the rhythm of competition – and the classification for the final of the 400 crawl. Entering the final of 400 in the afternoon is going to be complicated, you never know but the brand should drop 4m40s. I think Mireia will be a bit away from that time. On Monday 22 in the morning she swims the classification of 1,500 and in the afternoon she would play the final of 200 styles and the next day the final of the 1,500. On Wednesday morning, the preliminaries of the 200 butterfly and the semifinals in the afternoon to go to the final on Thursday. On Friday morning he swims the 800 to qualify for the final on Saturday afternoon. This transition is not bad. The last day, Sunday 28, the 400 styles would be the last bullet. If everything goes wrong, sometimes Mireia responds well in these situations. The sequence is positive for Mireia. The hard part is that the 200 butterfly is in the middle between 1,500 and 800. This is the most complicated thing. "

At the bottom of the valley awaits the Tokyo pool. Gwangju is the springboard.

Open water (July 14 and 16): Female and male finals of 10 km. The first will be held at dawn next Sunday. The top ten in each category qualify for the Tokyo Games.

Synchronized (July 19): final of free team, reference test of artistic swimming. Japan and China will once again try to curb Russia's hegemony. The young Spanish team will present their credentials with a view to refloating in the Olympic cycle that concludes in 2024.

Ledecky-Belmonte (as of July 21): the Spanish Mireia Belmonte and Katie Ledecky, the best long distance runner in history, cross their loaded programs in the 400, the 800 and the 1,500 free.

Water polo finals (July 26 and 27): there are two Olympic places in play in the men's tournament and one in the women's tournament. The United States women's team and the men's team from Serbia have qualified for Tokyo via the World League. Spain comes with the best male team since 2012.

The Santander League: There will be virtual public in LaLiga

La Liga Santander: The League calculator: forecast all the results and the final ranking

A week for LaLiga: you could live without football, but (for many) it was a worse life