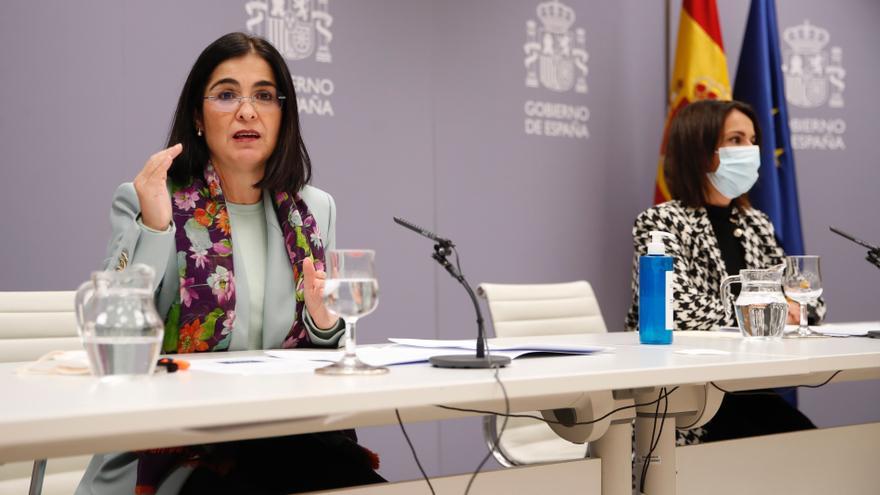 A guide to restrictions based on the level of risk approved without measures. The tensions between the communities and the Ministry of Health on account of the new COVID traffic light have ended, for the moment, with a strange solution: the Public Health Commission has given the green light to relax the accumulated incidence thresholds to escalate the alert level, but the approved document does not contain any restriction associated with each stage of risk. At this point, huge discrepancies have been found that have prevented reaching an agreement. The heart of the matter is in the measures on the hotel industry.

The last proposal of the Health experts was to introduce an early closure of the hotel and nightlife industry at the medium alert level while communities are mostly opting for the COVID passport as a tool to avoid restricting the operation of bars, as long as the judges authorize it. In territories like Euskadi, intention has been drowned in court. They are two opposing models that are making it difficult for the new version of the COVID traffic light to go ahead, whose objective is to adapt the indicators and restrictions to the new reality (80% of the population is vaccinated). Many regional governments are not willing, at least for the moment and with the Christmas holidays looming, to limit the activity of the hotel industry, either with schedules or with capacity.

Minister Carolina Darias has confirmed the decision of the Public Health Commission in a press conference, in which she has referred to the latest draft as a “working document” that “is not approved” and has defended, despite the proposal from its experts, that “indoors we are complying with the measures that we know are working, ventilation and use of masks.” “The important thing is unanimity and there is a very high consensus in approving a new framework of indicators and risk levels. The rest – he has ironized – I know that it is a subject that generates news.”

Thus, the Ministry has confirmed that its recipe is to “prevent and vaccinate” and not “dissuasive measures.” “We propose to advance in what we know has worked. We have a very high vaccination coverage and the way is there,” insisted Darias, whose objective, he says, is “to continue vaccinating without stopping.” Both those who have not yet done so, and groups for which a booster dose has already been approved. The third dose for people over 60 and health personnel has just received the approval of the Public Health Commission.

What does the new version of the semaphore change?

The incidence thresholds. The accumulated incidence at 14 days (cases per 100,000 inhabitants) has been the indicator with the most weight to measure the danger to which a territory was exposed by the pandemic and is the one that is modified in the new version. Thresholds become much looser, as already published by elDiario.es. Alert level 1 (low risk) has a new ceiling: it rises from 50 to 100 cases per 100,000 inhabitants in the last 14 days (a maximum of 50 in seven). The medium risk (alert level 2) is reached if it exceeds 100; the high (alert level 3) is above 300 and the extreme (alert level 4) would be reached with an AI that exceeds 500.

The document maintains special attention to transmission among those over 65 years of age because the group with the highest risk of dying if they are not vaccinated, have comorbidities (other diseases that make them more vulnerable) and in general respond worse to immunization because their body is weaker. Level 1 is reached if the AI ​​of this age group exceeds 25 cases; the 2, with 50; the 3, with 150 and the 4 if it is higher than 250.

The modification of these ceilings makes sense because with vaccination, with the same number of infections as in the past, it becomes seriously ill and many fewer people die, so that the health system can afford, colloquially said, a higher level of infections because These do not endanger -because the disease passes in a mild way thanks to the effect of the serum- the functioning of the hospitals. In summary, the risk levels have been revised upwards due to less hospital pressure.

The healthcare impact does not vary. The pressure generated by COVID-19 patients in hospitals (both in plant beds and in ICUs) has been the indicator that has motivated the most severe decisions during the pandemic. The old traffic light considered the situation controlled if less than 2% of hospital beds were occupied by infected patients and less than 5% of ICUs. These percentages do not change in the update. However, two more indicators related to the hospital situation are added that will determine the alert levels: the number of admissions to the ward and to the ICU in 7 days. If they are higher than five and one, respectively, the territory enters low risk (alert level 1).

From “new normal” to “controlled circulation”. The review of risk levels is also important at the terminological level. The document no longer speaks of “new normality” as the best scenario but of “controlled circulation”. Compared to what was previously considered, at this point in the pandemic it is relatively clear, experts say, that it is not possible to achieve group immunity. At least with the effect of current vaccines since the virus can continue to be transmitted – to a lesser extent – between immunized individuals.