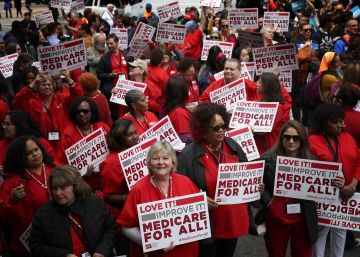 The Affordable Health Care Act (ACA) was an imperfect and incomplete reform. The political commitments necessary to bring it forward in Congress created a complex system that left too many people out. Their funding was also insufficient, and that is why copayments are often painfully high. And the law has been sabotaged by the state governments controlled by the Republican Party, and since 2017, by the Trump government.

However, despite all that, the law has vastly improved the lives of many Americans, and, in many cases, has saved lives that would otherwise have been lost through inadequate health care. Progress has been more spectacular in states that have tried to make the law work. Before the ACA went into effect, 24% of California adults who were too young to enjoy Medicare were not insured. Currently that figure has fallen to 10%. In West Virginia, the uninsured went from 21% to 9%. In Kentucky, they fell from 21% to 7%. In general, approximately 20 million Americans who would not have had health insurance without the ACA now have it.

On the other hand, none of the alarming predictions made by conservatives about the law has been fulfilled. It did not sink the budget, and, in fact, the deficits have declined steadily even when the ACA went into effect. It has not dissuaded workers from accepting jobs: the employment of Americans between 25 and 54 years old is as it was before the economic crisis. And despite Donald Trump's strenuous efforts to undermine him, the system is not in a "deadly spiral" because insurers make money and premiums have stabilized.

Despite Trump's efforts to undermine it, insurers earn money and premiums have stabilized

In short, Obamacare is a success. And American citizens largely disapprove of Republican attempts to destroy it, which could be said to be the main reason why Democrats did so well in mid-term elections.

But Republicans still hate the idea of ​​helping Americans get the health care they need. They remain determined to destroy the progress we have made. And in case you have not realized, the current Republican Party does not believe that the will of the voters should determine the policy, or that the rule of law as it is normally understood should limit the efforts of the right to get what they want.

Which brings me to the federal lawsuit that is currently being heard before the Fifth Circuit Court of Appeals, a lawsuit filed by the attorneys general of 18 States, and backed by the Trump government. This lawsuit states that the entire law is unconstitutional and should be annulled. The plaintiffs' arguments are clearly deceptive and have been raised with obvious bad faith. But a lower court judge has already ruled in favor of the lawsuit, and the first indications suggest that the two judges appointed by the Republicans of the tribunal composed of three judges studying the appeal could agree.

But, wait, have not we lived this before? Yes. In 2012, the Supreme Court ruled that Obamacare was effectively constitutional. In a fundamental litigation, the constitutionality of personal obligation (the requirement that people be insured or pay a fine), the Chief Justice, John Roberts, ruled that the fine was a tax, and that taxes are clearly constitutional . Therefore, the law remained.

So, why is this case being re-litigated? Well, in 2017, the Congress controlled by the Republicans, after resisting to revoke the ACA, reduced the fine for not being insured to 0 dollars, which effectively eliminated the obligation. Aha, said those who opposed the law: since no money is collected with the obligation, it is not a tax, then, it is unconstitutional, and, therefore, the entire law is unconstitutional.

As far as I know, a vast majority of legal experts consider this argument ridiculous, and therefore, it is. After all, he affirms that the ACA would be constitutional if Congress had explicitly eliminated the obligation, instead of making it simply irrelevant; the law would also be constitutional if a positive fine had been maintained, no matter how small, for example a dollar, because then it would still be a tax.

I'm not a lawyer, but I'm pretty sure that if a legal argument has absurd consequences, it's an absurd argument. However, as I said, a Republican judge has already ruled in favor of this stupidity, and it seems at least possible that two of the judges of the Court of Appeal follow suit. Even if they do, the case will be appealed to the Supreme Court, which will probably – probably – reject the claim. But few would have imagined that it would arrive as far as it has come. I would say that what we are seeing has two important consequences. The first is that the partisanship of the right has already corrupted much of the power of the judiciary. At this point, it is clear that there are many judges who will pronounce themselves in favor of whatever the Republican Party wants, regardless of how weak the legal arguments are.

The second is that, although Obamacare is now part of the fabric of American life, and although many of its beneficiaries are Republican voters think of their numbers in Kentucky and West Virginia, Trump and his party are more determined than ever to end the. And what this means in turn is that the 2020 elections will be another referendum on health care. If you are an American who suffers from a pre-existing illness, or who does not have a job with health benefits, you should know that if Trump is re-elected, one way or another, he will take away your health insurance.