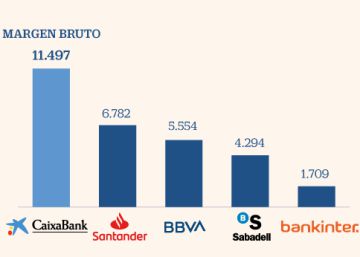 The largest bank in the Spanish market is finally a reality. Today CaixaBank completes the absorption of Bankia and begins its new journey in which It starts as the leader in Spain in the main business magnitudes. And it is that, the entity, that from next Tuesday will preside José Ignacio Goirigolzarri, and will have Gonzalo Gortázar as CEO, the party with the largest volume of assets, the largest commercial branch network, the largest number of clients and the largest volume of loans and deposits, among other indicators.

Regarding the size of the entity, according to the data communicated to the CNMV at the end of December 2020, CaixaBank was already the bank with the largest volume of assets in Spain, with 456,953 million euros. Added to the 209,842 million in Bankia assets, they give rise to a banking giant that begins its new stage with a total assets of more than 660,000 million of euros.

This figure means that CaixaBank is 64% larger than BBVA, the second entity by volume of assets in Spain with 405,981 million, and 88% (almost twice the size) than Santander. However, it is a still photo that is obtained from the aggregation of the figures between CaixaBank and Bankia, but in the merger process there are adjustments that may vary the data, so we will have to wait for the next presentation of results to verify the real magnitude of the entity with respect to its competitors.

However, with the available figures CaixaBank is not only the leading bank, but it far surpasses its second competitor. Thus, the entity will have a volume of customer funds (529,690) much higher than Santander (251,375) and more than double that of BBVA (206,428 million). It is also a leader in credit in Spain with a portfolio of 342,605 million in loans.

On the other hand, CaixaBank begins this new stage with the largest network of offices in the domestic market to add 5,698 branches throughout the territory. These figures almost double the network of the second bank, since Santander has 2,939 branches in Spain. In fact, its presence will be so overwhelming that the CNMC has identified 86 postal codes where CaixaBank will touch the monopoly with a predominant position, and which are located in Ávila, the Balearic Islands, Castellón, Las Palmas, Madrid, Segovia and Valencia. However, one of the reasons for the combination of the absorption of Bankia is the possibility of further simplifying the structure that will allow reducing the closing of branches to reduce costs.

With regard to the workforce, CaixaBank adds as of today more than 46,000 employees in Spain, a considerably higher figure than BBVA (30,338) and Santander (26,961). Anyway, as with the offices, as reported by CincoDías, the entity shuffles departures of between 7,000 and 8,000 employees, which represents between 14% and 17% of the workforce. However, these are preliminary figures and depend on the negotiations that are carried out with the unions, and the adjustments that the new bank is making after the conditions imposed by the CNMC aimed largely at avoiding financial exclusion.

In any case, the start of the new CaixaBank represents a milestone in the bank consolidation process in Spain. And the fact is that the merger of CaixaBank and Bankia, which has had the approval of the political and business sector, represents the union of the two largest former savings banks and strengthens the ties between Catalonia and Madrid.

Beyond the strategic direction of the operation to improve a banking business weakened in recent years by low interest rates, the absorption of Bankia by CaixaBank is a boost for the Government to recover its value. Bankia, which was controlled by the State through the FROB, received public aid for more than 24,000 million euros, of which it has managed to recover 3,000 million. This amount had become a challenge and the absorption of Bankia by CaixaBank, in which the State will control 16%, will improve its profitability, since it will start from a leadership position in Spain.

42% revaluation. The absorption of Bankia by CaixaBank has encouraged the bank’s listing on the stock market, after the general collapse in the sector a year ago as a result of the outbreak of the Covid-19 pandemic. In this way, CaixaBank shares have appreciated 42% in the last year, from 1.79 euros per share registered on March 25, 2020 to 2.55 euros at which it closed in yesterday’s session and which means reaching the highest of the last year (the maximum was registered precisely on Thursday of last week, when the shares closed at a price of 2.65 euros per share).

24,500 fewer shareholders. Despite the upturn in the price after the announcement of the takeover, the new CaixaBank (as of the close of 2020) begins its journey with 727,593 shareholders, with about 24,500 fewer than those it would have added a year ago. However, it must be taken into account that the entities have not distributed a dividend due to the ECB, it has prioritized keeping banks with high levels of capital and solvency to be able to finance families and companies during the first impact of Covid-19 and face the possible deterioration of the balance from 2021. Also, that in 2020 (from January 1 to December 31) CaixaBank registered a drop in the Stock Market of 24.91% and Bankia of 23.84%.