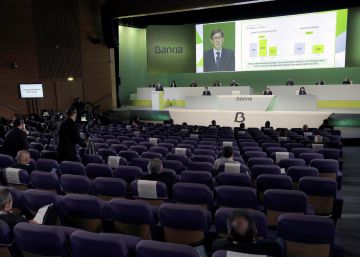 The National Competition Market Commission (CNMC) issued its opinion on the merger of Bankia and CaixaBank yesterday afternoon. It approves the operation with the commitment that the new group will act to avoid financial exclusion and the possible tightening of commissions and commercial conditions. In this way, the organization dependent on the Economy has imposed a series of conditions to guarantee that its own private customers do not suffer damages in up to 86 zip codes where the entity will be in a monopoly or duopoly position, nor will those other belonging to entities that used Bankia ATMs in an advantageous situation due to the alliance with their bank.

Despite these conditions, CaixaBank positively values ​​the conclusions reached by the CNMC to authorize the merger in the first phase. And he adds that the Competition claim “does not alter the objectives pursued by the merger and that they were announced in the presentation of the merger to investors and analysts held on September 18, 2020.”

Market sources have described the competition requirements as “acceptable”. Thus, the CNMC report has subjected the operation and its consequences to a rigorous analysis, and concludes that it “will not pose a threat to effective competition in the markets of corporate banking, investment banking, factoring, cards, POS, production and distribution of insurance and management of funds and pension plans ”. Although yes in some retail banking services.

The reason is that in the first segments of the business their resulting quotas “are not worrying or the addition of Bankia is low”. Although it can alter competition in retail banking, as well as in the ATM market. In these points, it concludes that the operation does “pose a threat to effective competition in certain areas of the retail banking market”, and of the branch network, for which it establishes conditions that will be in force for a period of 18 months to three years. .

For the branch market, in addition to carrying out the analysis at the national and provincial level, and in view of the high concentration indices derived from the operation in certain provinces.

86 postal codes have been identified in which the resulting entity will remain, either in a monopoly situation, being the only banking entity present in 21 postal codes, or in a duopoly situation exposed to weak competitive pressure, within a radius of 1.5 miles from the branch in another 65 zip codes.

After comparing products and conditions offered in the different market segments by both banks and their main competitors, it has been determined that the “zero or reduced” competitive pressure in these areas will give the new CaixaBank a “high power” in the market that could influence in their behavior, with possible adverse effects for consumers.

Thus, a risk of financial exclusion has been identified in places where only the parties are present, due to the possibility of closing the bank branches present in those areas after the merger. Furthermore, in environments where there is not enough competitive pressure from third party operators, there could be a worsening in business conditions for current Bankia customers.

CaixaBank has undertaken not to abandon, except in exceptional cases subject to prior authorization from the CNMC, any municipality in which one of the parties is currently present and there is no competing office to avoid financial exclusion in the municipalities. And in the identified postal codes in which it will remain in a monopoly situation, you will not be able to change the conditions and terms that Bankia customers currently have subscribed to in their products. This requirement must be met for a period of three years.

In addition, CaixaBank is obliged to notify Bankia customers of both the closing of the transaction, as well as possible changes in products that could affect them, such as new commissions or products that meet eligibility criteria and are comparable to or better than those that have contracted with Bankia.

The new entity resulting from the merger will offer its products in areas considered problematic due to competition under conditions that are substantially the same or not worse than those offered by CaixaBank in the three postal codes with the greatest exposure of the Catalan entity to competitors for also three years. Regarding the ATM service, it has been observed that, for clients of third-party entities that had agreements with Bankia, such as ING, Banco Sabadell and entities belonging to the Euro 6000 network, a possible rupture of the same would mean for them stop accessing the network of ATMs of the absorbed entity under the conditions in which they had been doing so and have to pay a higher commission.

Regarding a possible breakdown of these agreements between Bankia and ING on the one hand, and with Euro 6000 and Sabadell on the other, for the use of its ATMs, CaixaBank must allow them access for at least 18 months and under the same economic conditions. In the event that Bankia ATMs are closed, the customers of these entities will be given access to the CaixaBank ATM closest to that of the absorbed entity, and CaixaBank must duly signal this.