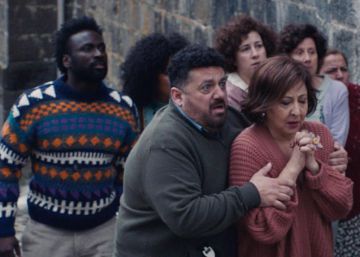 The first minutes of a comedy tend to set the tone, cadence and style. And there are some beginnings impossible to overcome, such as The never seen, second feature film by Argentina based in Spain Marina Seresesky.

I NEVER SEEN IT

Two actions narrated in parallel. In the first one, a dozen long neighbors of a village in empty Spain address in assembly a series of measures to avoid having to depend on the people next door, something larger and ancestral enemy; The problem is that there are not enough inhabitants, they lack personnel. Costumbrismo Chronicles of a town, humor Villaviciosa next door. In the second of the actions, accompanied by music with a lot of percussion and almost thriller, four blacks, three men and a woman, with African tribe clothes (or their stereotype), loincloths, feathers, fringes and ivories, flee through a snowy forest and end up arriving in the vicinity of the village. It is the presentation of characters; also of the conflict. But the second of the slopes is very complicated to justify, although later it is done in a rather pilgrim way. The movie starts fatal.

As you can see from those initial minutes, the basis of the latest comedy of Spanish cinema resides in almost always in recent times: in the contrast between social groups or citizens in the antipodes, this time among the villagers and the African immigration. At this point of the Spanish commercial regionalist comedy (and its surroundings), and seen the level of its latest contributions, with The Japan as a paradigm of the lowest point, we are almost satisfied that the situations created by the script do not give shame to others. And here, with writing of Seresesky alone, even being very discreet, you hardly get to that extreme. Perhaps only one: that of one of the Africans, naked before one of the women of the town, offering his sexual favors in response to the help he is giving him. A situation, finished off later with a good gag of physical cut, with which an inevitable question arises: what would happen if the gender of both was changed, and was a naked black before an older man of the town, and had been filmed by a director?

As almost always in these cases, it is the comedians who save a good part of the tessitura from the disaster, even if they do not achieve it with the whole set. Here, three classics such as Pepón Nieto, Paco Tous and Kiti Manver, as well as the arrogant Enriqueta Carballeira, who gives an accelerated course of comic and dramatic records in just a few sentences, and the extraordinary Carmen Machi, who emerges unscathed from the most dubious passages , and takes advantage of the few inspired moments of Seresesky.