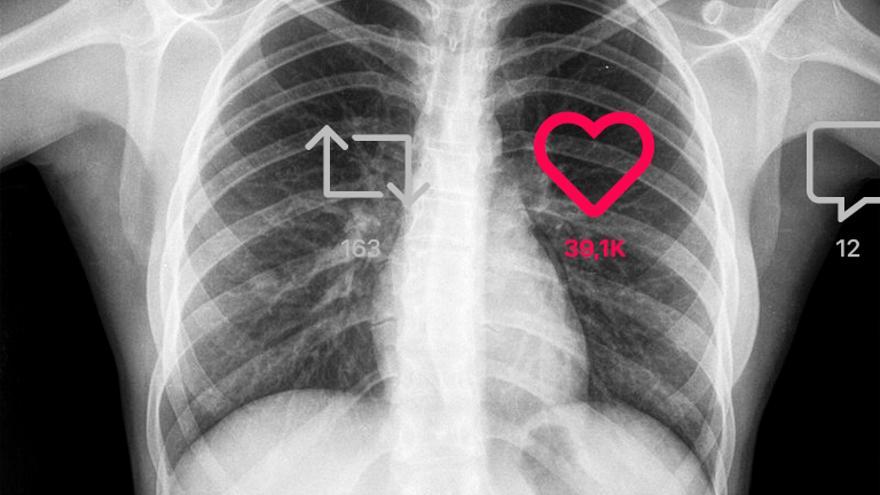 "I don't like my body. It's very thin, bony, with protruding spikes. A torso with guitar strings on my sides. A swollen belly. Scars on the sides. A button on my right. Two sharp shoulders and glass arms. But today I promise to love you a little more. These phrases belong to one of the last tweets of the journalist and photographer Olatz Vázquezwho passed away last September after a year ill with cancer. The 27-year-old used Twitter to show with photos and words what was happening to her. Vázquez also denounced on this social network that the COVID-19 pandemic has delayed the diagnosis of other diseases during this time, as well as their follow-up and cure.

Like Olatz, other people have found a place in social networks to talk about a taboo such as that of serious illnesses. In addition to advice on how to face successive operations or chemo cycles, there is space to denounce the collapse of the health system due to the pandemic, the lack of resources or the lack of research in rare diseases. There are as many stories as there are people who decide to show the world what is happening to them.

Elena Huelva was diagnosed with Ewing's sarcoma three years ago. One day, aimlessly, she started posting on Instagram about chemo, treatments, and cancer, and soon after, her followers started to increase. "People were interested. It seems that it is a somewhat taboo thing that is not usually talked about or that is usually normalized in children," says the young Sevillian, who is now 19 years old, from the other end of the phone. "I think that's why they started following me and that's why they liked it. It was something that you didn't used to see and now it's normalizing." At first she had very few followers and now she has more than 200,000.

For psychologist Diana Vasermanas, director of the Psicotourette Psychology and Neuropsychology office, social networks are one more medium of our time and that is why very diverse people, with all kinds of concerns, use them. Certain topics may be liked more or less, acknowledges the specialist, but for that there is the option to follow or stop following. The psychologist considers that this type of platform can serve to "break many taboos" such as the fear that a certain disease "touches us". "When social media gets into your life, you realize this is happening to a person that could be us," she adds. And not only that. They can also "promote responses of empathy and solidarity, by putting a face and a name to a problem."

Vasermanas recognizes that the networks also serve as a guide for health professionals, since they can obtain first-hand information about what patients go through with a certain disease or after applying a new treatment. "The books are phenomenal, but the reality of people is not always in a book," compares the psychologist, although she warns that it is not about "looking with a magnifying glass as if this were a show."

Elena has just published her first book entitled my desire wins (Montena, Penguin Random House). In it she narrates how the moment of diagnosis was, the way in which she has been dealing with each treatment and how important it has been both for her and for her parents to meet people in a similar situation along the way. And this did not happen only in the hospital, it was also through social networks.

"I am so bored and so nervous about the results that I start recording videos documenting my day-to-day life with cancer to upload to Instagram and TikTok. What starts out as just a hobbya way to spend endless afternoons in recovery […]it becomes the best escape route and one of the best decisions I've made in my life", says Elena in her book. Instagram has become a very large hospital room where you can talk to people and find support.She hopes her whole story can inspire others dealing with cancer.

Elena does not feel dizzy having thousands of followers, on the contrary, it seems to her "something wonderful". "I think Instagram has helped me a lot. I don't know how to explain it, but it has helped me pass the time," she says. "It's very important to be able to evade the hospital and the tests." In all this time, Elena has been lucky not to have haters. "I will have found three or four negative comments. Counted on the fingers of one hand. In the end, those comments do not matter to me if I have 100,000 good ones. I do not usually take them into account."

"It is important that the person who exposes himself to telling his life is prepared, that someone explains to him before, depending on his age, that what he tells is going to have an impact on you and that there are also other types of people who, without filter and from anonymity, he gives very harsh and very disrespectful answers," warns Vasermanas. These types of interactions, if they lead to a cruel or burlesque exchange, can harm the person who is exposed and affect self-esteem. "When a person tells her story with the intention of collaborating, you have to support her and warn her," she settles.

Social networks can be a diary or a space to connect with people with problems similar to yours. They can also be used simply to let off steam or to deal with everyday situations with humor. This is the case of Alan El Ruedas, a young man with quadriplegia who has more than 800,000 followers on TikTok.

In general, people prefer not to talk about serious illness or death. "The human mind has defense mechanisms to be able to move on. Many times not talking about certain illnesses or circumstances is a way to protect ourselves," says Vasermanas. At a social level, not disseminating something is a way of avoiding investing economic efforts in social and health policies. "That a disease has no cure does not mean that in countries like ours it is not compatible with providing quality of life. This costs money and resources," she protests.

Noah Higón, a young woman from Valencia who lives with seven rare diseases, demanded in the European Parliament that Spain invest more in research: "We need you so that those scientists, so that those doctors who can help us, do not leave Spain and really help us. So we don't have to die." The video in which she addresses and responds to Dolors Montserrat, former Minister of Health and currently a PP MEP, has more than 128,000 views. In it she criticizes the passivity of power and claims that people like her are not heroes, nor do they pretend to be, and assures that they have been excluded from society.

It could be said that the continued use of social networks is the opposite phenomenon to the conspiracy of silence, says the psychologist. "The conspiracy of silence happens a lot in the field of rare, neurodegenerative or terminal diseases," she notes. It is a phenomenon that occurs when "the patient and his environment do not want to talk or think it is better not to talk about what is happening." If you don't talk about something, it doesn't exist or with silence you get that the environment doesn't suffer and isn't worried. "There are a lot of things that should be discussed, to the extent that each person needs it," assures Vasermanas and assures that social networks have helped a lot "to open doors and see that diseases can and should be talked about, and that patients have a lot to say.

Regarding people who criticize comparing the disease to a fight or who consider that certain language can make the patient think that their recovery depends on their work or attitude, he asks not to be "so picky" with people who dare to open up . "The person who uses social networks is not a guru and does not replace the family, the doctors or the associations," the psychologist differentiates. "It is one thing to say on YouTube what coat or what color is worn this season and another that there is only one way to live or treat the disease." And it is that on the other side there may be a person with the same disease who "does not raise his head" and this can affect his self-esteem. What they say "should not be taken as absolute truth" and "respect on both sides" must be sought.