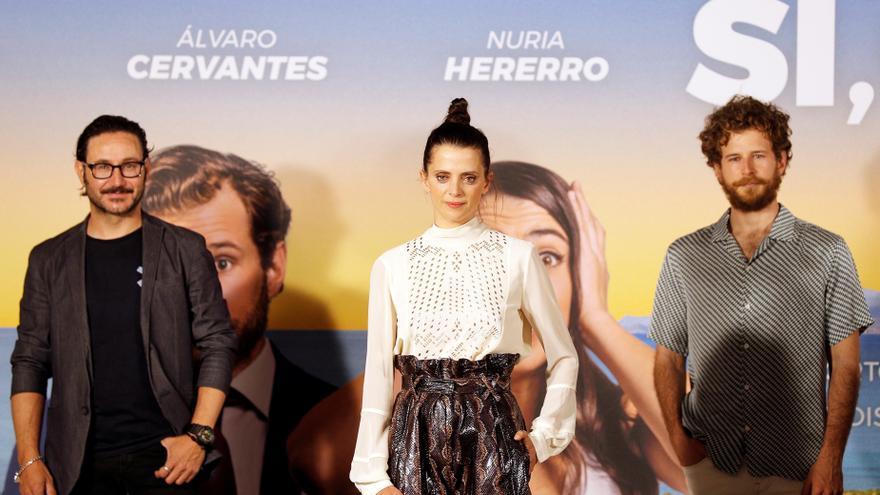 Valencia, May 27 (EFE) .- The romantic comedy ‘Sí, quiero (Corredor)’, a short film directed by Alfonso Sánchez and in which the “need” of the Mediterranean Corridor has been highlighted with humor, has been presented this Thursday in Valencia with the presence of the president of the Valencian Association of Entrepreneurs (AVE), Vicente Boluda, the group behind the project.

With the Valencian Nuria Herrero, the Catalan Álvaro Cervantes, the Andalusian Macarena Gómez and the Murcian Carlos Santos as actors, the Andalusian director has shown in just 23 minutes a “magical and mysterious” trip next to the Mediterranean Sea, in which they are made The lack of speed of the current railway network and the various shortcomings of the current train service on the eastern coast of the country are evident.

The businessman Vicente Boluda explained that “all these cultural activities”, framed in the #QuieroCorredor de AVE program, “reach all sides with humor and with these formidable actors”, while claiming the need for the Mediterranean Corridor, which will connect by train the French border with the port of Algeciras along the coast.

“Last year was a play, but humor is a great ally because it comes in an easier way,” said Boluda, who has maintained: “Beyond business meetings, with this play we continue with the policy of giving to know the Corridor and for it to be carried out in the shortest possible time “.

For his part, the Murcian actor Carlos Santos has stressed that the play “has not shown the vindication of this project, but its need” and has said that in the case of Murcia it is an “unfinished project”: “Murcia and Almería they are isolated, “he assured.

“In other parts of Spain they do not know that there is an unfinished project,” said Santos, who explained that around the Mediterranean Corridor “there is a lot of ignorance” and that the short is a project “very useful for a problem that is brutal” .

“Not only did we want to work on this fun script, but we clearly support that this be done,” said Santos, who pointed out that “we must connect the richness of the entire Mediterranean as soon as possible,” because, he has concluded, ” we have little connection between us, despite having the sea. ”

Cordovan Macarena Gómez has stated that she was “very excited” to be a supervisor on a train, because, she stated, she lives “on trains”: “I live in Figueres, I work in Madrid and I am from Córdoba”, she commented with laughter the Andalusian actress, at the same time as she has praised Alfonso Sánchez and assured that he is “one of the best comedy directors in the country.”

The director of the short film has stated that the work is inspired by the works of Billy Wilder, but also by the comedies of Luis García Berlanga and has stressed that although at first he thought “what is this”, when looking for information about the Corridor “It opened a problem for years that affects many people.”

“The most important thing was to tell the lack of infrastructure through people,” said Sánchez, who stressed that there was “a good material to scratch”: “We wanted to talk about the people of each land but getting out of the cliché”, has insured.

He has also argued that the cold and heat in different wagons or the time that must be used to go from Almería to Valencia have been some of the references that he wanted to capture, as well as that the casting, which has chosen actors from Andalusia, Murcia, Comunitat Valenciana and Cataluña, has been “totally intentional”.

Álvaro Cervantes has stressed that the short film was shot in three days, and that the train was really stopped due to covid. “We could not rehearse in person and we did it by zoom, which required extreme concentration,” commented Cervantes, who stated that he thought: “If it has worked by zoom, it has to come out wonderfully when we record.”