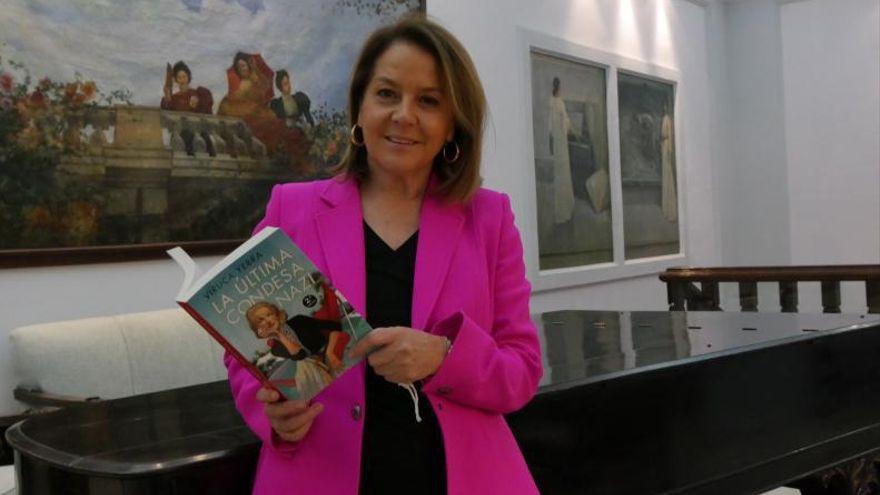 Like a sort of Marcello Mastroianni in The Dolce Lifebut in feminine and Spanish style, the journalist from Lugo traveled Viruca Yebra high class parties marbella when he worked as a gossip columnist for the newspaper ABC. Between night conversations, events, meetings and contemplative exercises along the promenades, Viruca Yebra began to perceive a complex background in life stories of a social class that lived the Marbella splendor of Spain in the 1960s. Four years of research and in-depth interviews later, The last Nazi Countessa novel based on real events that its author presented this Thursday at the Real Círculo de la Amistad.

The play stars Clotilde von Havel, an aristocrat and wife of the commander of the Nazi army. Maximilian von Havel, who before the advance of the Soviet troops is forced to leave her home along with her two children and a few belongings. She from that moment she becomes a refugee far from her country to which, due to terrible circumstances, her children are taken from her. Then begins an odyssey for the protagonist, through the devastated Postwar Berlin, New York and Londonduring which he tries to make sense of the loose ends of his past, until he ends up in the south of Spain.

"Clotilde is a very strong character, but full of traumas. She is fictional but she is inspired by many real Clotildes that I have met and they have told me their story," the author clarifies. She began to devise the novel based on two historical planes; the flight of aristocrats after the WWII, with its loss of status, as well as the group of bohemians, writers and artists installed in the south of Spain and who lived through the Franco dictatorship. But the spark was produced by "those older, elegant ladies who walked alone along Marbella's promenade and made me wonder about their past, the reason for their stories", in the words of Yebra, hence the beginning of embarking on a character that, in some way, encompassed all those ancient aristocrats that history displaced.

The Costa del Sol, According to Viruca Yebra, it was a 'hiding place' for Nazis at the end of the war. "I didn't want to do an essay about Nazis on the Costa del Sol", she explains, "Stories have been told about that time in Marbella, but from the immediacy. I tried to do a puzzle with all those stories and I came to the conclusion that, when you make an exhaustive study of a historical moment, it gives rise to something different, original". That distinctive character is found in an omniscient narration that never judges the characters, nor their decisions, but rather takes into account their historical circumstances to make the reader see that not everything is black and white. Clotilde does not sympathize with Nazi ideology and, despite everything, she has to bear that stigma. History reveals that the characters are never as simple as they seem At first glance, neither is Clotilde's husband. The Countess, at one point in the story, speaks with Franco to ask him to expatriate a Nazi, Otto Remer, a real character who in the book plays a relevant role as the executioner of the countess's husband, and the general omits doing so, alleging that the laws of his country do not allow it. This is just one of the various historical figures that participate in this fiction based on real solid data.

The Costa del Sol was, according to the author, a hideout for Nazis at the end of World War II

Most of the human stories during the war take place in the middle of the conflict, but the journalist wanted to go further, address lesser-known post-war themes, such as the exile of the Nazi leaders, the opposition to the regime itself within the German army, "Germans who also suffered a lot because of the war and for their country, without supporting the regime, but who were pigeonholed as Nazis for life", insists the author, or the search for their origins by Jewish families separated by Hitler. "People often talk about Jews who died or who were saved, but what happened to those who had to carry the ravages of warthose who struggled to know their origins, to meet again with their relatives?", Yebra points out.

"I have not been afraid to approach the story from the point of view that in life not everything is black and white and that we must study the context before making a decision", he declares, and admits that "I could not have written this novel if I weren't a journalist", due to the extensive field work, which is already bearing fruit, and its anecdotes, such as the fact that a Jewish woman, in conversations with the novelist in the Sephardic Houseconfessed his main dislike for the protagonist of the book, with whom he empathized until the end of the story.

This is precisely the intention of the author, that the book permeates any type of reader. "As a journalist, I don't write for intellectuals, but I use cultured language in my novel, but simple, so that it can reach everyone," he explains.

Before The last Nazi Countess, Viruca Yebra has already published another historical novel, El fuego de Flamboyán, based on the origins of his Galician family, focused on Galician emigration to Cuba in the first half of the 20th century. The good reception that the character of Clotilde is having, as well as the Marbella social fabric that surrounds her, has led the author to start a second part of the book, based on the life of Clotilde after her experiences in Marbella.

This journalist carries the pen "in her blood", as she herself admits, since she comes from a family where she wrote daily, with a father who had a small publishing house. She was a delegate of the Xunta de Galicia in Madrid, founder of the Galician Journalists Club and director of the Marbella International Club. She had always wanted to launch into the novel and it was difficult for her to do so because of her "modest attitude" of hers, she admits, that is why her journalistic spirit served as an impetus to recreate the real environments that surround her characters, like Clotilde.

Other Von Havels still walk around Marbella and, thanks to the pen of Viruca Yebra, come to life to remind the reader the ephemerality of good times and the complexity of being seen as you want instead of as history has placed you. In this sense, The Last Nazi Countess promises not to leave indifferent.